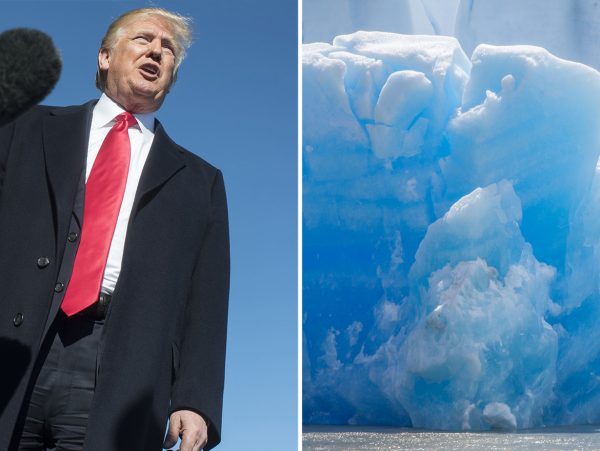 Although President Donald Trump might be skeptical of climate change (or global warming, if you prefer), activists in Finland hope to use the commander-in-chief’s likeness to draw awareness to the issue.

They plan to carve Trump’s image into the side of an Arctic glacier.

They want to create the roughly 115 foot-tall ice sculpture in a glacier that is melting, as yle.fi reported.

“We don’t simply want to build a monument. We want the project to be bigger and raise the topic of climate change on a broader scale, so that people talk more about climate change,” Nicolas Prieto, the group’s leader, told the site.

“Often people only believe something when they see it with their own eyes,” he added.

The sculpture would be built somewhere in the Arctic, as the melting ice has “symbolic meaning,” Prieto said.

Trump has doubted a human connection to climate change and withdrew the U.S. from the Paris climate agreement, calling it “very unfair.”

The accord is a pact with 200 other nations aimed at voluntarily reducing greenhouse gas emissions to combat climate change.

Melting Ice hopes to soon start crowdsourcing for its campaign, which would also include a documentary film about the process, the website reported.

This Fox News [7] article is used by permission.