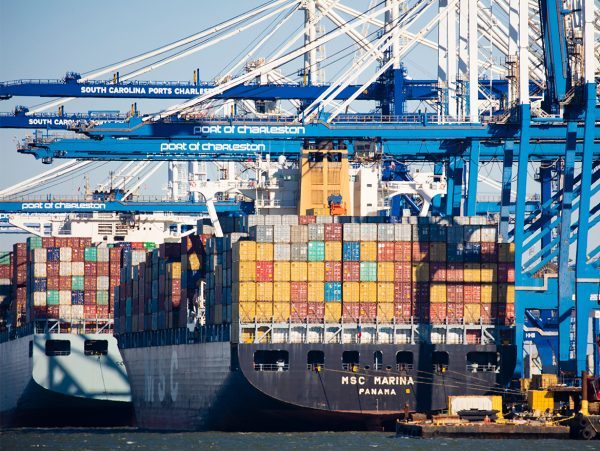 But this is not a bad dream, it’s reality and it begins where the Uranium One deal and the Port Canaveral Gulftainer deal intersect — at the Iraqi Jafar family.

The Jafars and their company Gulftainer are quickly closing in on a second U.S. port. Gulftainer and the Jafars are in the final stages of taking over operational control of Delaware’s Port of Wilmington, near Philadelphia. Diamond State Port Corporation will meet at 9 a.m. on Friday, April 6, at Wilmington’s Chase Center on the Riverfront to vote on the deal.

Gulfainer hid its secretly negotiated Port Canaveral deal from the American people until the day deal was simultaneously announced and signed. Similarly, Gulftainer hid its pending deal with the Port of Wilmington until Thursday, March 22, 2018, when members of the U.S. Senate and Congress was leaving Washington D.C. for a two-week  recess. Gulftainer has been lobbying Delaware’s state assembly.

Delaware Secretary of State Jeffrey W. Bullock, the Democrat politician in control of the Port of Wilmington through his simultaneous position as chairman of the board of the semi-public Diamond State Port Corporation, told the News Journal that “the goal is to have a contract the (Delaware) General Assembly can debate when the body returns from Easter break.”

Diamond State Port Corporation’s board is scheduled to vote on the Gulftainer deal April 6th.

Under Project Pelican at Port Canaveral, Obama awarded a 35-year cargo container terminal lease to Gulftainer and the Jafar family, despite the national debacle over the 2006 Dubai Ports Worlds deal.

Gulftainer’s Port Canaveral lease was allowed by the Committee on Foreign Investments (CFIUS [7]) despite connections between Crescent’s principals and Saddam Hussein’s WMD and uranium enrichment  programs.

The Jafars and their Gulftainer affiliate Crescent Petroleum were investigated by the Pentagon [8], Congress [9], and the Treasury Department [10]. Crescent Group Chairman Hamid Jafar schemed [11] to fund Saddam’s WMD programs through Crescent Petroleum.

Known as the “father of Iraq’s nuclear program” and “the father of Iraq’s uranium enrichment program [16],” Dr. Jafar served as Saddam’s Deputy Defense Minister and directed Iraq’s own nuclear weapons “Manhattan Project” with a team of over 27,000 [17] scientists and technicians — a workforce comparable in size to the CIA.

At the onset of Operation Iraqi Freedom the Pentagon considered Dr. Jafar a high-value target. Secretary of Defense Donald Rumsfeld placed Dr. Jafar’s name on CENTCOM’s secret “blacklist [8],” designating Jafar as an enemy combatant and an enemy of the United States.

Rumsfeld identified Dr. Jafar as a senior Saddam regime official wanted for capture and approved as a legitimate military target who could be engaged by coalition forces.

The Jafars, through several Crescent Group subsidiaries, entered into multiple joint ventures and other deals with Russian state-owned enterprises, all connected to Russia’s military industrial complex.

Igor Sechin, Inter RAO UES chairman of the board [20], is also CEO of Russia’s state-owned oil conglomerate Rosneft that is in a joint venture [21] with the Jafars’ Crescent Petroleum.

The Inter RAO UES and Rosneft Russian business deals connect Gulftainer to Uranium One. Russian executives move between Inter RAO UES, Uranium One, and Rosatom as though through a revolving door [23].

EMP expert Dr. Peter Pry told the Washington Examiner, [26] “Iran has also purchased Russia’s Club-K missile system … The Club-K, if armed with a nuclear warhead, could be used to execute an EMP attack.”

Badr Jafar announced at an Abu Dhabi business conference where Badr Jafar [29] and Former President George W. Bush [30] were both speakers that Gulftainer plans to “close an acquisition on the U.S. East Coast this year” and launch operations at a second U.S. port, Reuters reported on Feb. 8, 2018.

Gulftainer, the News Journal [31] revealed on March 22, 2018, is now in the final stages of acquiring control of Delaware’s Port of Wilmington and plans to expand the port by building a new container terminal on the site of a former DuPont (spun off as Chemours) chemical plant.

The Varkey Foundation website [32] states: “The Varkey GEMS Foundation has helped to facilitate more than 2,300 commitments through the Clinton Global Initiative to date. Upon funding and implementation, these commitments will have a total value of over $70 billion.”

The Wall Street Journal [33], The New York Times [34], and Morningstar [35] reported in early February 2018 that the Bill and Melinda Gates Foundation and the World Bank have launched a forensic accounting trace on hundreds of millions of dollars they gave to the Abraaj Group, a Pakistani private equity group affiliated with Crescent Investments.

Hamid Jafar is a founding shareholder of the Abraaj Group. Barack Obama’s Occidental College friend Wahid Hamid [36] from Pakistan is a managing partner [37]. The missing money was earmarked for hospital projects in Pakistan and other developing countries.

Mary Fanning is an investigative journalist who covers national security and the Middle East, whose work has appeared at Breitbart News, Family Security Matters, Communities Digital News, The American Report, and Center for Security Policy.