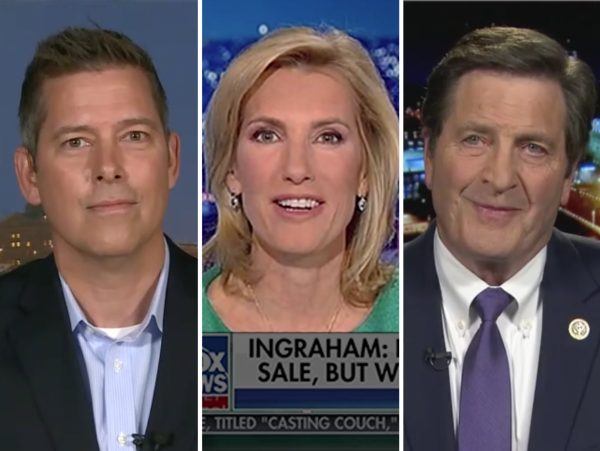 Conservatives tend not to sign petitions and organize formal boycotts — but a backlash is coming in the wake of liberal campaigns against the National Rifle Association (NRA), [1] a Republican congressman predicted Friday night.

Rep. Sean Duffy (R-Wis.) said during “The Ingraham Angle” on Fox News that companies that have raced to cut ties with the NRA in the wake of the deadly school shooting in Florida more than two weeks ago will pay a price.

“I think you’re going to see that affect the bottom line of companies all across America, which I think is a good thing,” he said.

Duffy, who fiercely debated the issue with Rep. John Garamendi (D-Calif.), said large corporations ought to remember who their customers are.

“You have left-leaning media companies that are putting incredible pressure on companies to buy into the liberal agenda. And I think what they forget, what these companies forget, is though they might be headquartered in New York or California or Chicago, they try to hawk their wares all across middle America, and we support the Second Amendment,” said Duffy.

But Garamendi said boycotts go back to the Founding Fathers.

“The reality is that boycotts for political and economic reasons are as old as this nation,” said the Democrat. “If you remember the first Tea Party — I mean, the Boston Tea Party — that was a boycott. It goes on and on in this nation where people express their political or economic views by not involving themselves with one company or another. For these companies, I think the words of the president of Delta Airlines [are] probably what we ought to look at, and that is that Delta, if I heard him correctly, basically said that [his] company — and he — does not want to be involved in a political debate that is not directly related to that company.”

Last week Delta Airlines cut ties with the NRA after the Florida school shooting — prompting a major outcry from gun owners and Georgia lawmakers, where Delta is based. A special discount had given price cuts to NRA members traveling to their annual convention (something that had been used on only 13 tickets, apparently).

“The problem here,” said host Laura Ingraham, “is that the members of the NRA had nothing to do with this [Florida] shooting. They’re not responsible for this … [So] it’s a message, and it’s the same message that middle America has gotten from the elites for years, that you’re stupid, you’re knuckle-draggers, you’re obsessed with guns, and you’re just a bunch of Bible-thumping idiots. That’s how they feel.”

Duffy (shown above left), said policymakers ought to examine the failings of local law enforcement officers and the FBI, as well as the local school system in Florida’s Broward County, rather than punish lawful gun owners.

“You hear the left-wing media talk about saving kids’ lives. You hear these kids talk about saving kids’ lives … If you want to save lives, take money away from Planned Parenthood and start attacking Planned Parenthood for destroying the most … defenseless and voiceless among us,” Duffy said. “And then you say you want to go after guns, which is a constitutional right? This is the greatest hypocrisy that’s ever existed on the face of the earth.”

He also said, “Liberals want us to rely on government … They want all reliance on government. And this is just one other step in a long line of things that take away individual rights and point us to the government.”

But Garamendi (above right) dismissed all of that as “really good talking points” that have little to do with the issue at hand.

“What we’re talking about here is really the safety in our communities, and there is an appropriate and a very good debate going on in America about what role guns have in our society,” he said.

“We’ve had guns in our society since our founding. And kids weren’t picking up guns and shooting other kids in school,” he said. “What’s happening the last 20, 30, 40 years that’s caused this phenomenon to take place? If you want to address this problem, you have to look at what’s happening in the culture: fatherless homes, violence that comes from Hollywood in regard to movies and video games … no faith or morality in our community, in our schools … You could look at a whole subset of issues that are addressing the anger that kids have right now, that causes them to pick up guns [4].”

“You have to look at what’s happening in the culture.”

“You’ve raised a very valid point,” said Garamendi. “And one of the things that we need to do is to use tools that are readily available and have been available for us for some time to be used in schools to deal with those precise issues that you raised,” Garamendi said. “That is the acting out, the loneliness that some people have, and the isolation and bullying that does take place.”