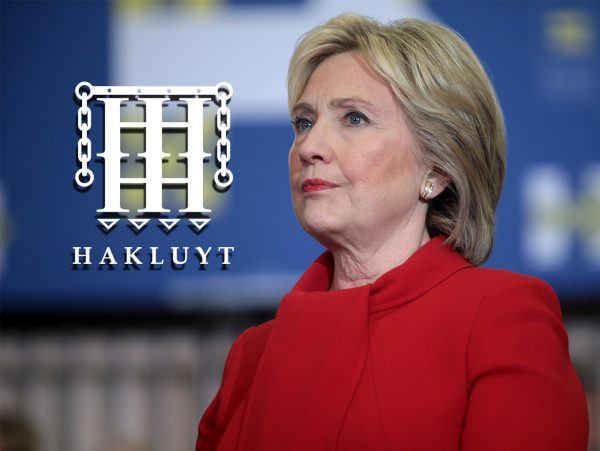 Fusion GPS has gotten all the headlines. But there was a second, even more powerful and mysterious opposition research and intelligence firm lurking about with significant political and financial links to former Secretary of State Hillary Clinton and her 2016 campaign for president against Donald Trump.

Whereas Fusion GPS [2] was created by three former Wall Street Journal reporters with links to the U.S. intelligence community, Hakluyt — with offices in London, New York, Singapore, Tokyo and Sydney — was founded by an enterprising trio of former British intelligence operatives with deep connections throughout the world’s official and corporate corridors of power and influence.

Hakluyt is described by the Bureau of Investigative Journalism’s Henry Williams [3] as “one of the more secretive firms within the corporate investigations world” and as “a retirement home for ex-MI6 [British foreign intelligence] officers, but it now also recruits from the worlds of management consultancy and banking … ”

The firm’s “style appears to be much more in the mold of the Christopher Steele dossier. Clients pay for pages of well-sourced prose from Hakluyt’s contacts across the globe,” Williams wrote.

Hakluyt isn’t familiar to the American public. But what has become well-known in recent days is the role played by one of the London firm’s most visible figures in drawing the FBI into the world of Trump-Russia collusion allegations, a world largely created by Steele in the infamous dossier bearing his name.

When the drunken junior Trump foreign policy adviser George Papodopoulous boasted in a London bar in May 2016 about Russian intelligence operatives peddling hacked emails that were damaging to Clinton, his most interested listener, according to The New York Times [4], was Alexander Downer, Australian high commissioner to the U.K.

It was Downer who told the FBI of Papodopoulos’ comments, which became one of the “driving factors that led the FBI to open an investigation in July 2016 into Russia’s attempts to disrupt the election and whether any of President Trump’s associates conspired,” The Times reported.

Downer, a long-time Aussie chum of Bill and Hillary Clinton, had been on Hakluyt’s advisory board since 2008. Officially, he had to resign his Hakluyt role in 2014, but his informal connections continued uninterrupted, the News Corp. Australian Network reported [6] in a January 2016 exclusive:

But it can be revealed Mr. Downer has still been attending client conferences and gatherings of the group, including a client cocktail soirée at the Orangery at Kensington Palace a few months ago.

His attendance at that event is understood to have come days after he also attended a two-day country retreat at the invitation of the group, which has been involved in a number of corporate spy scandals in recent times.

The News Corp. Australian Network quoted an unnamed British diplomatic source explaining that Hakluyt “operates in the shadows, it’s not exactly open and transparent and so any serving, and that’s the difference, serving diplomat with access to sensitive information and insight associating with the group raises a worry in Whitehall.” Whitehall is the British government’s equivalent to the White House.

Downer’s continued involvement with Hakluyt locates the shadowy operation in the world of the Clintons. As previously reported by LifeZette, it was Downer in 2006 who as Australian foreign minister signed a memorandum of understanding with Bill Clinton and the Clinton Foundation.

The memorandum committed $25 million from the Australian government to the foundation for HIV/AIDs programs in China, Papua New Guinea, and Vietnam. A subsequent audit was unable to account for how those funds were spent.

Earlier this year, the FBI asked retired Australian police detective Michael Smith to provide information he uncovered concerning the 2006 deal — suggesting the bureau’s investigation of the Clinton Foundation is focused on the controversial charity’s domestic and international activities.

Related: Aussie Complaints Headed to FBI on Clinton Foundation’s Dealings Down Under [8]

Downer is also connected to another firm of great importance in the international intelligence world. That would be China’s telecommunications giant Huawei, on whose Australian board he served for several years, beginning in 2011. U.S. intelligence experts have long described Huawei as a tool of Chinese espionage in America.

But Downer is not the only Clinton fan in Hakluyt. Federal contribution records [9] show several of the firm’s U.S. representatives made large contributions to two of Hillary Clinton’s 2016 campaign organizations.

Jonathan Selib of Brooklyn, New York, listed himself as a “consultant” and his employer as Hakluyt when he made four contributions totaling $3,200 to Hillary for America and one contribution worth $2,350 to the Hillary Victory Fund during the Democratic presidential primary. Selib also contributed to the congressional campaigns of Rep. Seth Moulton (D-Mass.) and John Lewis of Montana. Selib was formerly chief of staff for Sen. Max Baucus (D-Mont.).

Another Hakluyt executive, Holly Evans, contributed $500 to Hillary for America the day after Selib’s June 27, 2016, donations to the same Clinton campaign entity. Evans listed Rye, New York, as home and described herself as a Hakluyt “executive.” Her résumé includes stints advising Vice President Dick Cheney and working on the National Security Council during the second Bush administration.

The link between Clinton and Hakluyt is ironic considering the former secretary of state’s strong commitment to liberal Democratic environmental causes.

A third Hakluyt executive, Andrew Exum of Washington, D.C., made multiple contributions to several Democratic congressional candidates, including Elisa Slotkin in Michigan and Daniel Helmer of Virginia. Exum served as a U.S. Army infantry officer and as former deputy assistant secretary of defense under then-President Barack Obama. He has also been a contributing editor of Atlantic magazine.

The link between Clinton and Hakluyt is ironic considering the former secretary of state’s strong commitment to liberal Democratic environmental causes. Hakluyt’s record includes being caught planting spies in Greenpeace and other environmental groups on behalf of energy giants British Petroleum (BP) and Shell.