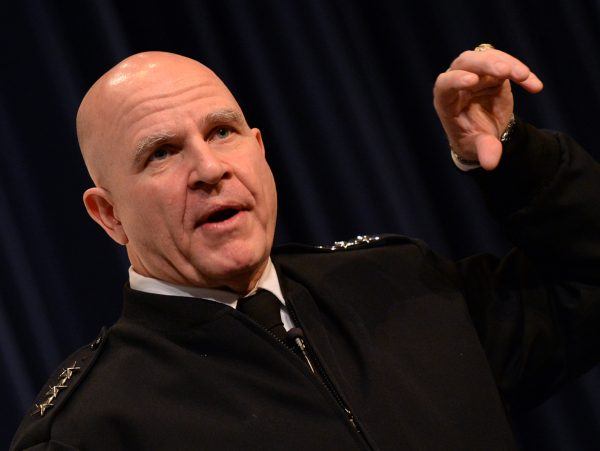 President Donald Trump announced late Thursday afternoon that he will have a new national security adviser come April 9, when Ambassador John Bolton replaces Gen. H.R. McMaster in one of the most important positions in the White House.

“I am pleased to announce that, effective 4/9/18, @AmbJohnBolton will be my new National Security Advisor. I am very thankful for the service of General H.R. McMaster who has done an outstanding job & will always remain my friend. There will be an official contact handover on 4/9,” Trump tweeted.

McMaster, a three-star general in the U.S. Army, reportedly will retire rather than accept a new assignment somewhere in the military. He is best-known for his book, “Dereliction of Duty,” about the failures of American policymakers during the Vietnam War.

The announcement apparently came only 45 minutes before Bolton went on Fox News’ “The Story with Martha McCallum” — the host of which thus snared the first official interview with the incoming national security adviser. Bolton seemed surprised that the president made the announcement when he did.

Bolton was the country’s ambassador to the United Nations under President George W. Bush, but the appointment was made during a congressional recess. The confirmation process was a bruising affair with no assurance of a positive outcome, due to his occasional personal bluntness and the fact that his forceful advocacy of conservative positions often irritated liberal Democrats and career diplomats. He served in the position from August 2005 to December 2006.

He has articulated hard-line stances on the Iran nuclear deal, the North Korean denuclearization crisis and dealings with Russia and China. He favors a strong, aggressive American posture on the world scene. He came about his views honestly, having originally arrived in Washington as a protegé of Sen. Jesse Helms, a tough conservative Republican from North Carolina.

With Trump’s nominating CIA Director Mike Pompeo as his new secretary of state and a face-to-face meeting of some kind expected to happen in May with North Korean dictator Kim Jong-un — along with talk of a gathering with Russian President Vladimir Putin in the near future — Bolton’s plate is already full before he officially starts work in the White House.

Trump campaigned during the 2016 election on a platform that called for pulling back from “nation-building” campaigns, a stance that at first glance could mean trouble ahead for the chief executive and Bolton.

But during his interview with McCallum, Bolton recalled something he was told by White House chief of staff James Baker when it became clear Reagan did not support an idea proposed by an aide: “We’re not going to do it because the guy who was elected doesn’t want to do it.”