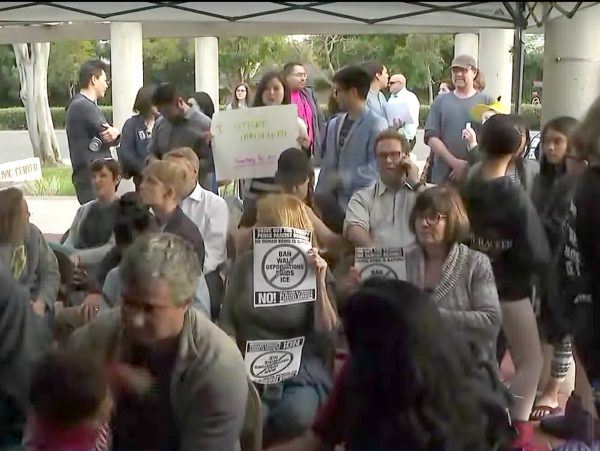 California has been opting out of U.S. immigration law for years. The state, and many jurisdictions within the state, have moved well past merely tolerating illegal aliens in their midst; they now treat illegal aliens as a preferential class.

In many cases, legislators in the perpetually cash-starved state have created earmarked benefits for illegal aliens [1] even as they slash benefits and services to everyone else. California has also enacted ever more stringent sanctuary policies that not only protect deportable criminal aliens, but defy federal laws that explicitly prohibit these policies [2] as well.

In a fit of pique over the election of President Donald Trump and his efforts to restore moderate levels of immigration enforcement, the California legislature enacted SB 54 [3], a bill designed to thwart virtually all federal immigration enforcement in the state. It was a bill so radical in its protection of criminal aliens that, in the words of the Los Angeles Times, it was “fiercely opposed” [4] by most California sheriffs.

That bill and other California sanctuary measures are now the subject of a lawsuit [5] filed by the U.S. Department of Justice. But it is also the subject of a rebellion among jurisdictions within California that view radical sanctuary policies as a threat to public safety and an affront to common sense.

Earlier this week, Los Alamitos, a city in Orange County, took similar action. By a 4-1 vote, [7] the city council approved a measure exempting itself from SB 54. Council member Warren Kusumoto noted that the action was not only warranted in order to facilitate the removal of criminal aliens from the community, but also on constitutional grounds.

In “a conflict between two governing documents — the Constitution of the United States and the state constitution itself,” the city is obligated to comply with the U.S. Constitution, which makes it clear that federal law pre-empts state law, he asserted.

Los Alamitos is the first city in California to explicitly defy SB 54, but it is not expected to be the last. At least 13 municipalities around the state are considering opt-out measures, said Los Alamitos Mayor Troy Edgar, and many have been in touch with his office.

Moreover, Orange County — the state’s third largest county — will consider a resolution [8] next week to either join the U.S. Department of Justice’s lawsuit against SB 54, or file one of its own.

How to deal with an insurrection on the part of cities and counties that might choose to follow Los Alamitos’ lead poses an interesting dilemma for California officials, particularly in light of the federal government’s lawsuit against California.

If California argues that Los Alamitos’ policy is illegal because it is pre-empted by state law, it will become much more difficult for state officials to argue that SB 54 itself should not be pre-empted by federal law — though the state will surely offer tortured legal reasoning [9] for how SB 54 doesn’t violate U.S. laws.

While California officials ponder their options, illegal alien advocacy groups are jumping right in. The ACLU of Southern California and several like-minded groups sprang into action. Unhelpfully to their cause, the ACLU, in a Facebook post [10], conceded that the purpose of SB 54 isn’t just to ensure passive noncooperation on the part of California government entities with federal immigration enforcement.

These policies threaten to undermine the basic constitutional structure of our nation, as state and local governments feel empowered to disregard federal laws just because they don’t like them.

Rather, the utility of SB 54 is that it actively “protects our immigrant communities from ICE and deportations.” Of course, we didn’t really need the ACLU to tell us that California’s sanctuary policies are not just designed to ensure that state and local governments take a seat on the sidelines when it comes to immigration enforcement.

They are aggressive and illegal policies explicitly intended to prevent the federal government from carrying out the laws of the United States, as the nation witnessed last month when Oakland Mayor Libby Schaaf defiantly tipped off criminal alien [11] targets of an upcoming federal enforcement action.

Reining in radical sanctuary policies that turn criminal aliens onto the streets is important only because they endanger public safety [12]. These policies threaten to undermine the basic constitutional structure of our nation, as state and local governments feel empowered to disregard federal laws just because they don’t like them.

In fighting back against reckless sanctuary policies, California’s anti-sanctuary jurisdictions may well be defending the integrity of our republican form of government.