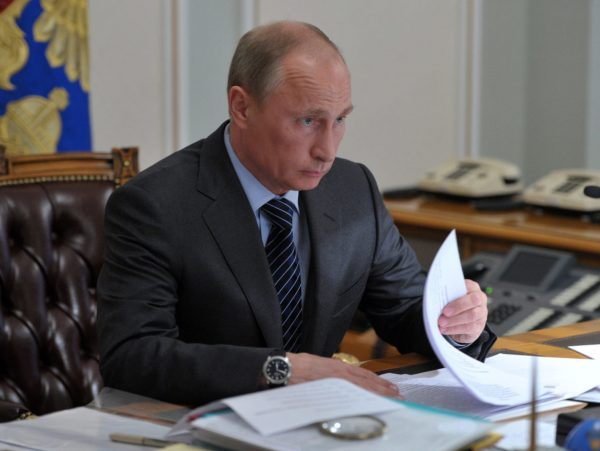 Russia has been slapped with punishing actions several times by President Donald Trump, a contrast to the weakness shown by former President Barack Obama, according to Sarah Huckabee Sanders, White House press secretary.

Sanders said during her Tuesday afternoon media briefing that the indictments Friday of 13 Russian individuals and three Russian agencies were long preceded by the president’s frequent denouncements of illegal hacking behavior during the 2016 presidential election.

Sanders’ remarks — sure to cause a continued stir in a liberal mainstream media that is convinced Trump is soft on Russia — follow the chief executive’s Tuesday morning tweet saying his administration has been tougher on Russia than Obama.

“I have been much tougher on Russia than Obama, just look at the facts,” Trump tweeted. “Total Fake News!”

Sanders noted that the president pushed for $700 billion more in defense spending and increased energy exports to Eastern Europe. Trump has also armed the Ukrainians and closed three Russian diplomatic properties in the United States during his first year in the Oval Office.

“I can assure you that Russia is not excited about that,” said Sanders. Russian President Vladimir Putin (seen in the accompanying photograph) has ridiculed suggestions his country attempted to influence the 2016 U.S. presidential election.

But NBC News’ Kristin Welker hit back at Sanders, claiming Trump has declined to press new sanctions that were approved by Congress in 2017, but Sanders noted that the claim, often repeated by Democrats on social media, is misleading.

“There is a process that has to take place,” said Sanders. “That law also says the countries have to violate something in order for the sanctions to go in place, and that has not necessarily happened.”

Sanders said the media often misreported the president’s sentiments on Russian hacking in the 2016 election.

“The president didn’t say Russia didn’t meddle,” Sanders said. “What he’s saying is it didn’t have an impact and it certainly didn’t have help from the Trump campaign.”

Pressed by ABC News’ Jonathan Karl on specifics about election-related hacking, Sanders ticked off a list of sparsely reported actions Trump has taken to counter Russian hacking and spying. Sanders said the Trump administration has focused on cybersecurity in federal agencies and election processes. She also emphasized that the Department of Homeland Security has been meeting with local and state officials to keep election computers free from invasion.

The administration’s defense caused immediate criticisms, on social media and, of course, CNN.

Sara A. Carter, a Fox News contributor, responded on Twitter to media colleagues who insisted that Obama treated Russia harshly. Carter noted Obama took his harshest actions only after the 2016 election was well concluded, and just before Trump took office.

“But only when everything came to a head as Obama was ready to leave office he ejects Russians, sanctions,” Carter tweeted.

“When you compare the Trump administration response, particularly this president’s response, and the Obama administration’s response — I mean, Sarah Sanders is entering, really, delusional territory there,” Sciutto said on CNN after the briefing.