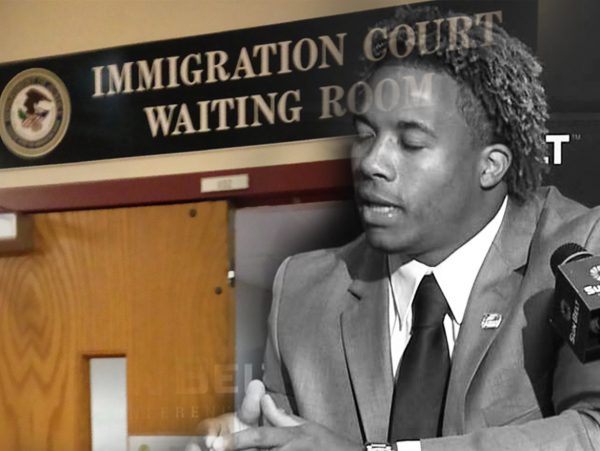 Jackson was just like any other American, only he had a higher-profile job than most of us: playing linebacker for the Indianapolis Colts. But being a big, tough, famous guy didn’t make him immune from the negligence of our government when it comes to preventing people from sneaking into the country illegally — and repeatedly.

As most of the nation was getting ready to watch the Super Bowl, Jackson and his Uber driver, Jeffrey Monroe, were getting mowed down and killed on an Indiana highway in the early morning hours, by a drunk driver who snuck into the country illegally — and repeatedly.

Manuel Orrego-Savala was behind the wheel of the vehicle that fatally struck Jackson and Monroe. He had no driver’s license but had a blood alcohol level three times the legal limit — indications of depraved indifference to human life.

He was also in the country illegally after having twice been deported (both times resulting from DUI convictions), and tried to flee the scene of the accident rather than come to the aid of his victims — both indications of his contempt for the laws of the United States.

Monroe would have joined the long list of victims of drunk drivers who should never have been in the country in the first place: people like Tessa Tranchant, a 16-year-old girl from Virginia Beach; Sarah Root, a 21-year-old woman from Omaha; Drew Rosenberg, a 25-year-old from San Francisco; and thousands of others who were killed or otherwise victimized by criminal aliens who exploited our porous borders and sanctuary policies that facilitated their presence here even after, in many cases, they had committed other offenses.

The killing of Jackson and Monroe occurred amid a renewed round of debate about immigration and a resurgence of people entering the country illegally. The entire Democratic Party and a significant number of Republicans believe that the focus of immigration reform should be on addressing the circumstances of the millions of people who are here illegally — particularly those who arrived here as minors.

People like Jackson and Monroe are written off as collateral casualties, victims of bad luck. Illegal aliens who arrived here as minors are described with the aspirational term “dreamers,” a euphemism that obscures the fact that they are victims not of U.S. immigration policies but, in most cases, of their parents’ contempt for our immigration laws.

A key point of contention in the debate is a secure wall along the U.S.-Mexico border, which might have prevented Orrego-Savala from easily slipping back into the country after having been deported.

President Trump is demanding it, while congressional Democrats (most notably Senate Minority Leader Chuck Schumer, who voted for a border fence in 2006) are adamantly opposed — assuring us, despite all evidence to the contrary, that the border is already secure.

While Trump appears to be holding firm to his demand for enhanced border security as part of a deal on immigration, he has notably backed off on his insistence that any legislation must include an end to dangerous sanctuary policies.

These state and local policies, which bar law enforcement agencies from cooperating or sharing information with federal immigration authorities except under extraordinary circumstances, virtually assure that more illegal aliens like Orrego-Savala will get to stay in the country and that more innocent people like Jackson and Monroe will die.

Orrego-Savala’s two deportations were triggered by DUI convictions in California in 2007 and 2009. However, under strict sanctuary laws that have since been enacted in California, Orrego-Savala would not even have had to go through the effort to sneak back into the United States illegally for a fourth time.

There will be many more victims whom most of us will never know about because they didn’t play in the NFL.

Under sanctuary policies now in place in California and a growing number of jurisdictions around the country, police would have been barred from letting Immigration and Customs Enforcement (ICE) know Orrego-Savala had been arrested, and would have refused to turn him over to ICE even if they asked. He would have been back out on the street and back behind the wheel.

Securing our borders, ending sanctuary policies, and taking other reasonable steps to protect the security of the American people should not be contingent on anything. They should be non-negotiable obligations of federal, state and local governments.

The fact that we are having this discussion says a lot about why so many people have so little faith in their government. It also tells us that there will be many more victims whom most of us will never know about because they didn’t play in the NFL.