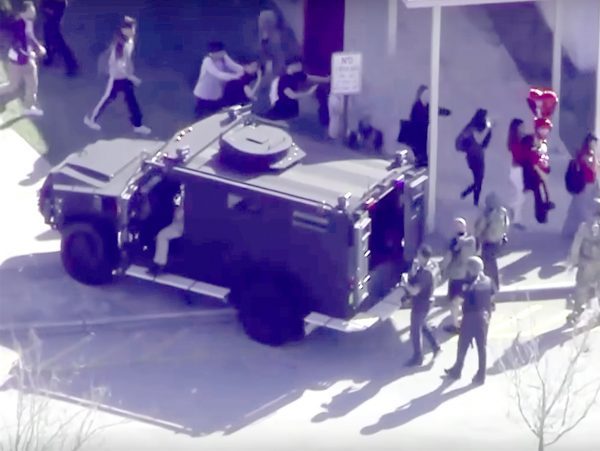 I’m disgusted that I keep hearing the “gun control now” debate after every school shooting. I’m equally as sick of hearing about the horrid crime stats in Chicago because it has the strongest gun laws (as an opposition to gun control).

This latest shooting in Broward County, Florida, where dozens of students were shot and 17 people were killed [1], is the end for me. I refuse to indulge the conversation about guns after a mass shooting any longer.

School shooters have a mental illness. Period. They use weapons (of any kind) to perpetrate premeditated murders that cost innocent lives and destroy the fabric of our society. This problem is much deeper and more widespread than we can ever imagine. In order to stop mentally deranged people from committing mass murder, we have to first admit that we have a deep-rooted cultural problem that is getting worse the more we ignore it.

We’ve become a country full of simpletons fighting to win our side of “the argument” with no propensity to fight for a solution. This is true in preventing school shootings, solving our deficit crisis, working through the health care debate, and many other goals.

Keeping the country paralyzed in fear serves as a way to raise funds and gain power for both political parties. There is little reward to solving a problem that requires a commitment that is longer than a single political term in office.

It’s also sickening that we seem to have become numb to mass shootings. Some in the media are guilty of this.

The mainstream media outlets have a predictable reaction to each tragedy. They have a litany of analysts standing by who are ready to make pro-gun or anti-gun control arguments. They converge like an army of ants, with cameras and lights, into grieving communities across America. In the days that follow, they pack up, exit the community, and leave us all more divided then we were prior to the tragedy. For them, it’s a huge ratings event, which nets more profit.

There are only two ways to solve this cultural problem and keep our children safe.

The first solution is working to address mental illness in America. We must humble ourselves and recognize we will never solve this problem, but we can make it better. Our best hope is to reduce the number of people who will commit murder and crimes by helping people heal. For the rest of us, recognizing warning signs is our duty.

The second solution to school shootings is security. Government’s main role is to keep order in society. It is falling short.

Over the years, I’ve asked my children’s school administrators about offering more police assistance on campuses. The typical response is that “we have to pay them out of our school budget, and therefore it’s unaffordable.” This is an answer that translates to “saving lives is unaffordable.”

The financial culture of our schools is adult-focused and not student-focused. As an example, I’ll share a recent fundraiser at Tuskegee Airmen Global Academy in Atlanta where adults (teachers) netted the most benefits from the funds. Instead of spending money on student-focused initiatives, they spent it on food, clothing and bowling for adults. How does a bowling party for adults, with no children present, benefit the school or its students?

This sort of waste, collectively, becomes billions of available dollars to use on security. However, a public school culture that is adult-focused and not student-focused cannot see this opportunity because it can’t see the problem or it role in it. Moreover, these people don’t want to see it.

As we watch schools waste money on teacher-focused initiatives, beautiful new football stadiums and other irrelevant expenditures, we are denying our students the security that they need.

I’m not suggesting that we turn our communities into police states. I’m suggesting a solution that brings peace and security to students.

I will propose the first step. Let’s stop wasting money — making adults feel good with bowling parties and expensive new stadiums. Instead, let’s install metal detectors and armed security in all of America’s public schools. If we need security to prevent hijackings on airplanes, we need it to save students’ lives as well.

As we watch schools waste money on teacher-focused initiatives, beautiful new football stadiums and other irrelevant expenditures, we are denying our students the security that they need.

This means we have to put adult-focused pet projects aside and shift the focus to saving lives.

We don’t need any additional money added to the budgets. We need our priorities re-ordered, which means taking the money for the stadium or party and shifting it (for now) to security.

Why not use some of our public school facilities to install precinct offices for local police? Not only would this save on the brick-and-mortar costs of these police departments, but it would add a significant deterrent even for the most mentally deranged people who may endanger our children.

We already own the land/buildings in local municipalities and we can find cost synergies that serve both the police departments’ budget constraints and the schools’ needed, enhanced security presence.

School districts can partner with large businesses in the community to help pay for equipment or training that budgets don’t allow. Large corporations have a significant interest in the quality of local schools in order to recruit top talent into their community. Additionally, corporations can realize a valuable public relations benefit by being a partner for desperately needed school security.

I’ve provided a couple of solutions. There are many more if we united to solve our problems.

This is an “all hands on deck” moment for America.

Instead, both political sides are “all hands on” guns. There is not a pro or anti-gun argument on this matter that will solve anything.

Wake up, America. Do something.

Bryan Crabtree is the live afternoon host on Atlanta’s Biz 1190 from 4 to 6 p.m. weekdays and again on AM 920 The Answer from 9 to 11 p.m. His real estate show with his wife, Mackenzie Crabtree, can be heard on Saturday at 9 a.m. on AM 920 The Answer and noon on Sunday on Biz 1190. His “Crabtree Chronicle” (focusing on local Atlanta issues) is also heard during the day on AM 920 The Answer.