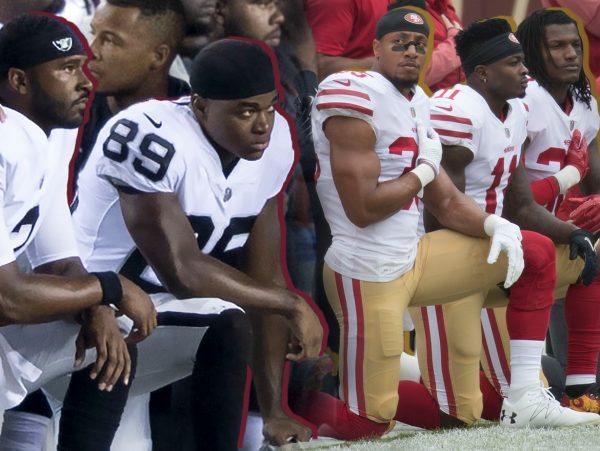 NBC will keep the cameras rolling on any NFL players who choose to kneel during “The Star-Spangled Banner” when the network airs Super Bowl LII on February 4 at U.S. Bank Stadium in Minneapolis, according to the game’s executive producer.

“If there are players who choose to kneel, they will be shown live,” he said.

The anthem will be aired live and is scheduled to be performed by Pink. Potential protesters will have an opportunity to make a statement in front of a massive audience, as 112.2 million people watched Super Bowl LI last season — the fifth most-watched program in television history.

Gaudelli said the broadcasting team of Al Michaels and Cris Collinsworth would probably identify the players, explain the backstory of the polarizing protests “and then get on with the game.”

During the final week of the regular season, 19 players kneeled, sat, or stayed in the locker room for the national anthem in protest.

Trump kindled a feud with the NFL and players who kneel during the national anthem at a rally in September, when he called for players to be fired if they disrespected the flag. Several players and coaches condemned Trump’s comments and locked arms in solidarity during the anthem. Some players have decided to stay in the locker room and skip the anthem altogether.

NBC’s “Will and Grace” star Debra Messing recently praised her 13-year-old son last week for refusing to stand for the national anthem when he attended a New York Rangers game at Madison Square Garden. Meanwhile, Trump retweeted an image last week appearing to show a grieving military family, in a message to NFL players who “still kneel.”

Some players have decided to stay in the locker room and skip the anthem altogether.

Putting a spotlight on anthem protesters during the Super Bowl will presumably irk Trump, but NBC has plenty of experience agitating the president. NBC’s “Saturday Night Live” lampoons Trump on a regular basis, and the network recently blamed a third party for an errant tweet backing Oprah Winfrey to run for president.

Kaepernick has not been signed by a team since parting ways with the 49ers. He has accused the league’s owners of colluding to keep him off the field.

This Fox News [2] piece is used by permission.