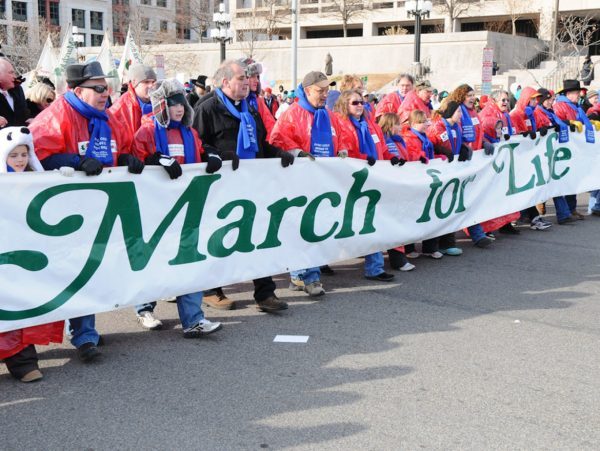 Although a slim majority of Americans call themselves “pro-choice,” about three in four favor significant restrictions on the procedure, according to a new poll commissioned by the Knights of Columbus.

The survey of 1,350 adults, conducted by Marist College from January 8 to 10, found 51 percent are pro-choice, compared with 44 percent who call themselves “pro-life.” At the same time, 76 percent favor restrictions on abortion. Only 12 percent say abortion should be legal throughout a woman’s entire pregnancy.

“I think that’s the big takeaway,” said Andrew Walther, vice president of communications and strategic planning for the Knights of Columbus, a Catholic men’s charity.

The survey adds to the political debate as anti-abortion activists prepare for the annual March for Life in Washington on Friday — a gathering that organizers announced on Thursday would feature an address by President Donald Trump.

Support for abortion restrictions cuts across party lines. Some 61 percent of Democrats favor significant restrictions, to go along with 92 percent of Republicans and 78 percent of independents. Even 60 percent of self-declared pro-choice Americans favored restrictions of one kind or another.

“The pro-choice label is not a good indication of where Americans stand on abortion.”

Among all Americans, the poll showed:

On another question, 52 percent view abortion as causing a woman more harm than good, while just 29 percent said it improves a woman’s life.

On the thorny question of when life begins, nearly half — 47 percent — said conception. Another 15 percent said during the first three months.

Marist has conducted the poll for the Knights of Columbus since 2008. Barbara Carvalho, director of the Marist College Institute for Public Opinion, told LifeZette the results since that year indicate that Americans’ views are “much more nuanced” than the binary question asking people to declare themselves pro-choice or pro-life.

“We find a much wider range [of beliefs], particularly among people who identify or consider themselves pro-choice,” she said.

Beyond their views on the law, Carvalho said most Americans have discomfort with abortion in some scenarios. She pointed to the question about the morality of aborting an unborn children with a genetic defect, for instance.

“There is a very, very strong consensus that it’s morally unacceptable to have abortion in that circumstance,” she said.

Andrew Guernsey, senior legislative assistant at the Family Research Council, said the poll shows broad opposition to abortion after the point when the fetus develops a heart, fingers and toes.

“That’s not a choice. That’s killing a child,” said Guernsey, whose Washington-based organization promotes traditional Christian values. “An increasing number of Americans are moving toward the pro-life position that life begins at conception.”

Guernsey said the survey results ought to demonstrate that the will of the people is for passage of the Pain-Capable Unborn Child Protection Act, which would prohibit most abortions after 20 weeks. But the bill, which passed the House of Representatives [1] last year, remains stuck in the Senate with no indication that Democrats will allow a vote.

Guernsey said that demonstrates a chasm between Democratic voters and their leaders. He said activists in the party tolerate no dissent on the issue and pointed to efforts to oust anti-abortion Rep. Dan Lipinski (D-Ill.).

“What really is going on here is the Democratic Party is enforcing an orthodoxy on this issue,” he said.

Walther, of the Knights of Columbus, said the annual poll has shown remarkable consistency on the question of whether abortion should be restricted.

“We’re having this debate from the two poles rather than from the middle,” he said.

Given the bipartisan consensus of some of those specific restrictions, Walther said, if lawmakers frame abortion opposition on those specific proposals, “they’re going to resonate across party lines.”