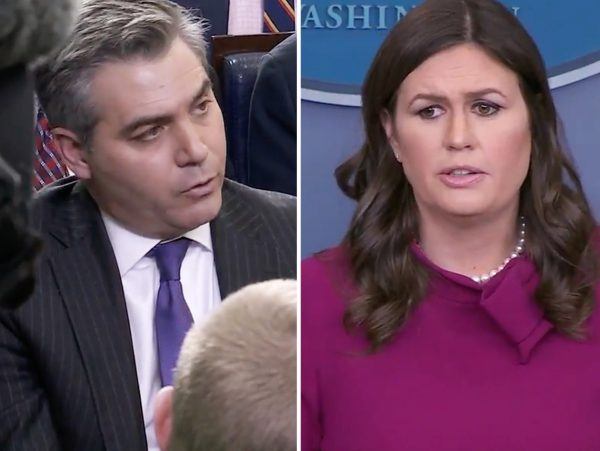 Sarah Sanders, the White House press secretary, on Monday roasted CNN’s Jim Acosta for asking if President Donald Trump improperly “pressured” officials in the Russia collusion investigation, saying Trump wants to “get this resolved” so reporters get “the Russia fever out of their system.”

After news broke on Monday that FBI Deputy Director Andrew McCabe was stepping down from his post, many Democrats and members of the media speculated over whether Trump’s repeated criticisms of McCabe had anything to do with his departure.

When Acosta asked Sanders what she would tell the president’s “critics” who believe he applied “steady pressure” to DOJ and FBI officials, Sanders did not mince words.

“Sarah, what would you say to critics who believe that this White House and this president have had almost a sort of steady pressure put on the Justice Department, put on the FBI, since the president came into office on this special counsel investigation?” Acosta asked. “It sounds like there are multiple officials at multiple levels who are being pressured by the White House, by the president.”

Sanders replied that she “would say what I have said probably 100 times before and [will] continue [to] say, I’m sure, 100 times today that the White House has been fully cooperative and will continue to be fully cooperative” with special counsel Robert Mueller’s probe into alleged Russian collusion.

“In fact, we have gone above and beyond many times and certainly done everything that we could,” Sanders added.

Unsatisfied, Acosta pressed Sanders to address “this notion that the president has been applying pressure for months” to such officials as McCabe, Mueller and others.

“The only thing that the president has applied pressure to was to make sure we get this resolved so that you guys and everyone else can focus on the things that Americans actually care about,” Sanders replied.

“And that is making sure everybody gets the Russia fever out of their system once and for all, that you are all reminded once again there was no collusion, and that we can move forward and focus on things like national security and the economy and solving the immigration crisis that we have here in our country,” Sanders added.

Undeterred, Acosta pressed yet again, asking Sanders, “So no obstruction of justice? Nothing improper? Nothing inappropriate here at all whatsoever from the president since he came into office, when it comes to this investigation?”

“No, and I think we’ve been pretty clear on that,” Sanders said, adding Trump “wasn’t part of the decision-making process” that led to McCabe’s removal.

“How can FBI Deputy Director Andrew McCabe, the man in charge, along with leakin’ James Comey, of the Phony Hillary Clinton investigation (including her 33,000 illegally deleted emails) be given $700,000 for wife’s campaign by Clinton Puppets during investigation?” Trump tweeted on Dec. 23, 2017.