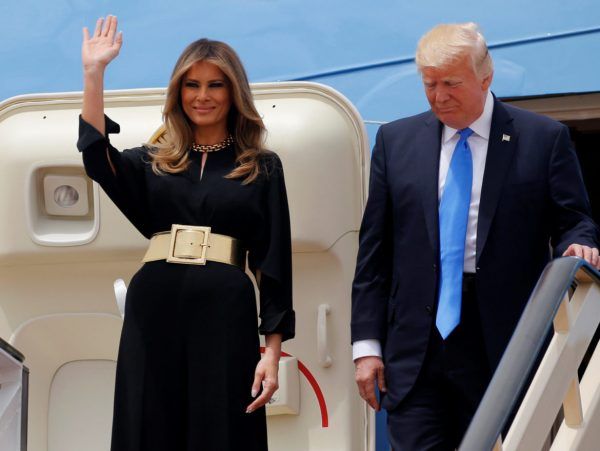 Among the recent speculation and criticism surrounding President Donald Trump’s trip to Davos [1] and even the Stormy Daniels “scandal,” first lady Melania Trump has taken the high road — and chosen not to play into the hands of her critics.

This is a wise tactic — one she has implemented since the beginning of her husband’s presidency — and it is working out quite well for her. It also speaks volumes for her anti-bullying campaign. Mrs. Trump leads by example. She rises above her detractors by not recognizing them. This diminishes the power of their words and ultimately will leave Melania Trump remembered well in the history books for her accomplishments.

Instead of going to Davos, Switzerland, with her husband, Melania Trump decided to stay behind in the U.S. She made a private visit (without the press) to the Holocaust Museum to honor International Holocaust Remembrance Day.

Her visit was announced after the fact, and she released the following statement: “My thoughts and prayers are with the people whose lives and families were broken by the horrors of the Holocaust. Yet it is also through our shared humanity that we come together now in commemoration, strength, and love. My heart is with you, and we remember.”

She also tweeted: “Thank you @HolocaustMuseum for a powerful & moving tour that honors the millions of innocent lives lost, and educates us on the tragedies and effects of the holocaust.”

The more we see of Melania Trump as first lady, the more we like her. Mrs. Trump closed out 2017 with some great new poll numbers, and she is starting this year of 2018 with style and grace. This should come as no surprise. We Americans want to like our first ladies. They almost always poll higher than their husbands. Yet why the late start for Melania Trump, and where is she headed from here?

Mrs. Trump and her young son, Barron Trump — President Trump’s youngest child — didn’t move into the White House until June 2017. The family wanted their son to finish out his school year in New York, which made perfect sense. Yet some members of the press criticized this, and some even called her a liar. These same people were far from sight and lacking in praise when she followed through on her stated plans — and came to Washington when the school year ended. Her detractors continued, saying she didn’t want to be first lady and wasn’t embracing her new “job.”

The position of first lady is not a job. “We the people” do not elect nor pay the first lady of the United States. There is no job description — no colleges classes or training. There are no requirements (other than being married to the president). In many cases, a woman does not even need to be married to the president to be the official White House hostess (Presidents Jefferson, Jackson, Van Buren, Harrison, Tyler, Taylor, Fillmore, Buchanan, Johnson, Arthur, and Wilson all come to mind — but I digress).

During Melania Trump’s first international trip with her husband in May 2017, she met Pope Francis. This revealed her affiliation with the Catholic Church, and gave America only our second Catholic first lady ever (Jacqueline Kennedy was the first). Mrs. Trump conducted herself with respectful dignity during the entire trip, which included visits with school children and with those at orphanages and at hospitals. She proved to be a huge asset to her husband on the international stage.

After Hurricane Harvey in August 2017, when she and President Trump visited Texas to view the damage and support the victims, the press focused on the shoes she wore [3] to walk from the White House to Marine One. What should have been considered, first and foremost, was that she went on the trip. Michele Obama and Laura Bush — two first ladies with consistently high approval ratings — did not accompany their husbands on every trip those presidents made to New Jersey and Louisiana for the Sandy, Katrina and Rita weather disasters.

In December, many press outlets criticized Melania Trump’s beautiful Christmas decorations. This is where the general public had had enough. Mrs. Trump gave a respectful nod to the past and a gracious look to the future, while beginning some new traditions of her own. Last year, Vogue published an extensive spread on Michelle Obama’s 2016 decorations (which were also beautiful). There was page after page of flattering comments and photographs. This year, the magazine only reprinted “memes” about how “awful” and “Halloween-ish” Mrs. Trump’s decorations were. The press had brought politics into the holidays — and people didn’t like it.

Mrs. Trump also recently received flak from the press for her actions regarding a decaying tree on the White House grounds. One of the first people to defend Melania Trump on this in a tweet was Chelsea Clinton. She thanked Mrs. Trump for her actions that saved part of the history of the house and grounds loved by so many — including herself. Mrs. Trump called in experts, analyzed the situation, and preserved the tree, while also considering the safety of visitors. The press had, once again, turned on Mrs. Trump and blown a situation way out of proportion with misinformation.

Melania Trump continues to publicly embrace a role the press continues to say she is not embracing. She is against bullying in all forms, but particularly cyberbullying, as she is (in my opinion) one of the most bullied first ladies in modern history. In her efforts to combat these cruel actions in our society, she leads by example. She takes the high road and traverses it with style and grace. She gives her critics no fuel for their smoldering fires with her lack of response to their harsh words. She steadies her course and proceeds with her plan.

Each first lady has the distinct ability and privilege of making the role uniquely her own. Melania Trump has done everything she said she would do as first lady and more — and she’s only just begun. She’s done so with dignity.

Andrew Och, based in the Washington, D.C., area, is the author of the book “Unusual for Their Time: On the Road with America’s First Ladies.” [5]