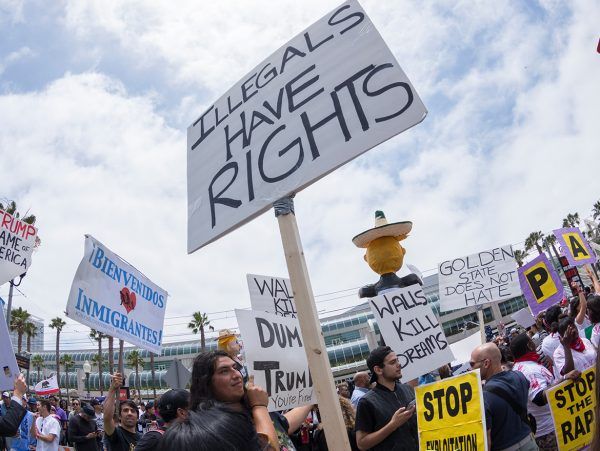 Federal authorities should consider calling the bluff of some “sanctuary city” officials who refuse to cooperate with deportation efforts and bring criminal charges, according to a former Immigration and Customs Enforcement (ICE) officer.

In growing defiance of President Donald Trump’s efforts to enforce immigration law, some politicians in sanctuary jurisdictions have indicated they are willing to become martyrs and go to jail rather than cooperate with attempts to deport illegal immigrants.

Arnold, who was the special agent in charge of ICE’s Homeland Security Investigations office in Los Angeles and now works for a crisis management firm, said actively obstructing federal immigration officers could fall under the alien harboring statute.

“I foresee where they’re going to make an example out of someone and bring criminal charges against someone,” he said. “I certainly think they could.”

Filing criminal charges against an elected official would represent a serious escalation in the immigration battle the Trump administration is waging against state and local officials across the country. But acting ICE Director Thomas Homan recently did not rule it out. [1]

Attorney General Jeff Sessions has put several cities and counties on notice that they are at risk of losing federal law enforcement grants [2] if they do not change their policies to allow communication between ICE and local police about immigration.

Arnold said cutting off funding is going easy on holdout jurisdictions. He said he understands the argument of not wanting local cops to actively participate in enforcing federal immigration law.

“But to intentionally be obstructing federal authorities from enforcing the law and to go so far as to harbor aliens, that’s a whole other thing,” he said. “And that’s what a lot of these jurisdictions are doing.”

Arnold said ICE asks local authorities to hold illegal immigrants arrested on other charges by filing so-called detainers. Whenever someone is arrested and fingerprinted, police enter the information into a national database to alert other jurisdictions that might want that person on other charges.

That same system also alerts ICE to anyone who might have a final deportation order or a record of previously entering the country illegally or getting arrested by immigration authorities. On that basis, ICE asks for the suspect to be held. But many sanctuary jurisdictions ignore those hold requests and let the inmates go once they make bail on the local charges.

“So this isn’t just, you know, ICE is just presuming that someone’s here illegally,” he said. “In an instant, they know based on fingerprints that not only may someone be here illegally but that someone has been previously removed from the U.S.”

Arnold said tolerance of illegal immigration undermines the legal immigration system. He said addressing the issue has to include more than just building a wall along the U.S.-Mexico border. He said it has to include aggressive interior enforcement. He called on Congress to make mandatory the currently voluntary E-Verify system, which instantly checks whether applicants with job offers are legally allowed to work in the United States.

Full compliance with the system would make it much harder for illegal immigrants to find work, Arnold said.

“If you build a big, beautiful wall and don’t have interior enforcement, [it will be ineffective] … You got to do it all, or it’s not gonna work.”