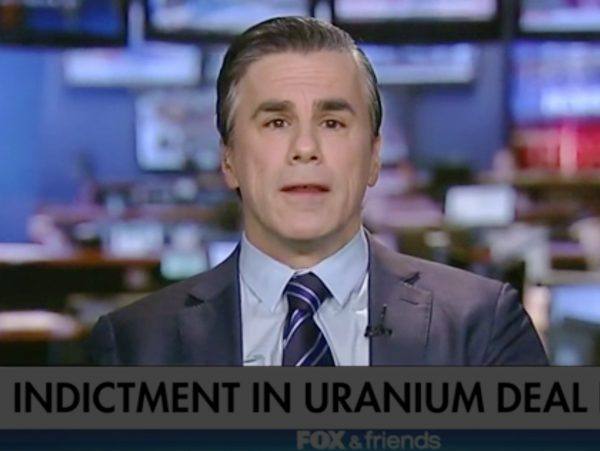 Judicial Watch President Tom Fitton urged the Department of Justice to investigate “aggressively” the Clinton Foundation’s ties to the controversial Obama-era Uranium One deal, during an interview Monday on “Fox & Friends.”

Fitton was reacting on Fox News to word that a Maryland grand jury indicted Mark Lambert, a former transportation company leader, on 11 counts related to foreign bribery, fraud, and money laundering — the first indictment issued in connection with the Uranium One deal.

The agreement, which gave Russian interests control of much of the United States’ uranium supply, reportedly took place after millions of dollars in contributions from Russians poured into the Clinton Foundation while Hillary Clinton served as secretary of state.

“There’s tens of millions of dollars that were laundered … by Russians into the Clinton operation that needs to be thoroughly investigated in order for the American people to be rest assured that our uranium industry hasn’t been compromised,” Fitton said.

He also said the Russians chose to send “tens of millions of dollars into the Clinton Foundation in order to make sure that the right decisions would be made by the State Department under Hillary Clinton that would allow them to expand their activities here in the United States.”

“And the reason they were involved in the uranium industry here in the United States and actually had expanded involvement was because of the Uranium One-related decision-making … by the Obama administration — made despite them knowing that this type of activity was going on, the sort of bribery kickback schemes that are endemic in Russia and Russia-related industries no matter where they are operating,” Fitton added.

The 2010 Uranium One deal came under further scrutiny in October 2017 after The Hill reported that the Obama administration discovered the racketeering scheme before signing off on the deal.

Justice Department officials also chose to review Clinton’s handling of classified information while serving as America’s chief diplomat during negotiations on the Uranium One deal, reports revealed earlier in January.

The Justice Department noted in its statement that Lambert “conspired with others” to “make corrupt and fraudulent bribery and kickback payments to offshore bank accounts associated with shell companies, at the direction of, and for the benefit of, a Russian official, Vadim Mikerin, in order to secure improper business advantages and obtain and retain business with TENEX [SC Techsnabexport].”

Fitton said he believes it isn’t “coincidental” the Lambert indictment came a few months after reports showed “the Justice Department under Obama was hiding this in plain sight from the American people, and certainly hiding key information from Congress.”

Ultimately, “this is about, in the end, what steps [they] are going to take about what happened with Hillary Clinton. And now we’ve got the bribery going on with the Russian transportation here in the United States,” Fitton said. “Is the Clinton gang going to be investigated by this Sessions Justice Department as aggressively as ought to happen?”