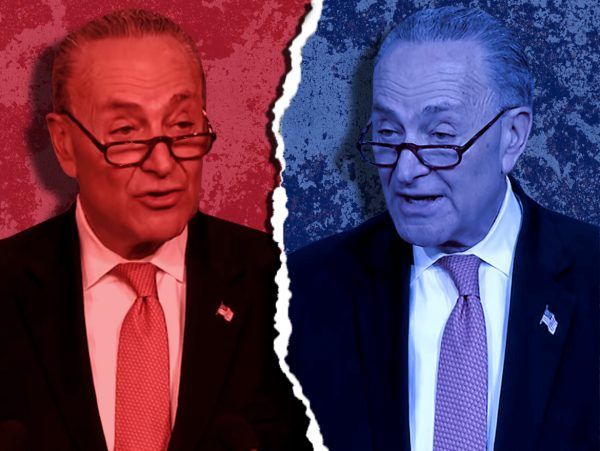 Back in 2009, though, Schumer said that being an illegal immigrant was “wrong and we have to change it.”

Liberal open-border immigration activists have worked hard for years, literally, to change the language in the debate, making terms that appear in U.S. law like “illegal alien” into unacceptable slurs.

More recently, Democrats have targeted the term “chain migration,” referring to new citizens’ sponsorship of extended relatives for immigration. Sen. Kirsten Gillibrand (D-N.Y.) said on ABC’s “The View”  that it is “literally trying to demonize families and make it a racist slur.”

Sen. Brian Schatz (D-Hawaii) tweeted that the phrase is an “epithet.” And Sen. Chris Murphy (D-Conn.) tweeted that “its purpose is to dehumanize immigrants.”

So what would these folks think of Schumer’s 2009 speech at Georgetown University in Washington, D.C.?

“When we use phrases like ‘undocumented workers,’ we convey a message to the American people that their government is not serious about combating illegal immigration, which the American people overwhelmingly oppose,” he said during the Georgetown speech, uncovered Monday by the Republican National Committee. “If you don’t think it’s illegal, you’re not going to say it.”

Democrats increasingly do not say it, blurring the line between legal and illegal immigration. Schumer himself has changed his rhetoric on the contentious issue. It didn’t take him long for him to switch to the “undocumented” moniker.

On a candidate questionnaire from the League of Women Voters in 2010, he wrote that he favored “requiring undocumented immigrants to register with the government” in order to earn legal status.

In 2009, though, he was unequivocal about illegal immigration.

“I think it is illegal and wrong, and we have to change it,” he said.

Schumer said Americans never would accept efforts to grant legal status to illegal immigrants if they did not believe the government was serious about ending future illegal immigration.

“He might be more popular if he did,” said Jessica Vaughan, director of policy studies at the Center for Immigration Studies.

But Vaughan, whose Washington-based think tank favors lower levels of immigration in this country, acknowledged it likely would not go over well with the activist Left.

Vaughan said Schumer’s language back in 2009 likely was motivated by the spectacular failure of the 2007 version of comprehensive immigration reform.

“I think it had to do with the drubbing he and his fellow Democrats took in 2007,” she said.

Vaughan said the demonization of legal terms of art such as “illegal alien” is telling.

“It shows you how far left the Democratic Party has moved, how extreme has become the band of acceptable opinion on immigration,” she said.