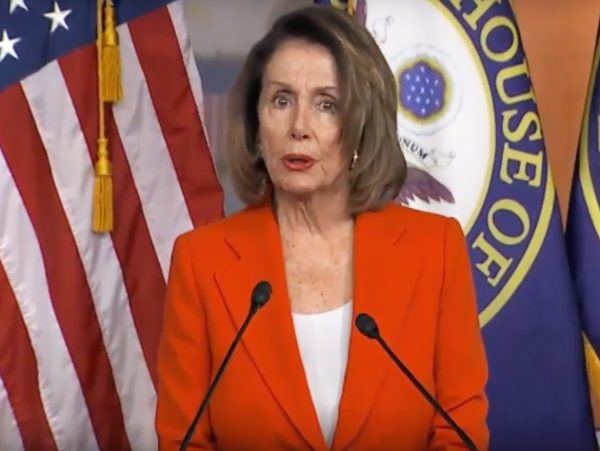 House Minority Leader Nancy Pelosi (D-Calif.) claimed Thursday that “God is with” the Democratic Party on the so-called dreamers in Congress.

Pelosi said during a Capitol Hill news conference Thursday that Democrats will fight to protect illegal immigrants brought to the U.S. as children and who participated in the Obama-era Deferred Action for Childhood Arrivals (DACA) program. But the House minority leader went a step further when she insisted that God sided with the Democrats and gave them a moral imperative on the issue.

“We are not going to turn this country into a reign of terror of domestic enforcement and have DACA, the dreamers, pay that price,” Pelosi said. “But I’m optimistic — I always have been. God is with us on this. Our country is great. We know that greatness springs from the vitality that newcomers bring to our country.”

A Pelosi spokesperson could not be reached for the scriptural basis of the minority leader’s claim that “God is with us” on DACA and dreamers — beneficiaries of the Development, Relief, and Education for Alien Minors (DREAM) Act. Pelosi’s comment came as lawmakers face a Saturday deadline for approving a new temporary continuing budget resolution.

Pelosi also said Democrats “will not leave” Capitol Hill for the December recess “without a DACA fix” through the passage of the DREAM Act. She listed emergency disaster relief funding, a children’s health care program, and opioid crisis-relief funding as priority issues for the House minority.

“Democrats are not willing to shut government down,” Pelosi insisted.

PoliZette writer Kathryn Blackhurst can be reached at [email protected] [2].