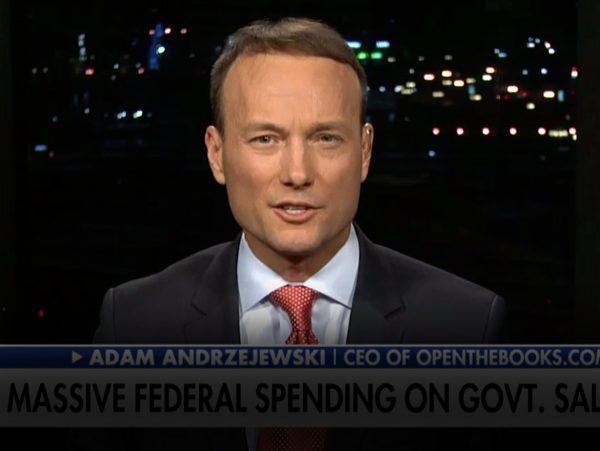 Right behind Cochrane is Stephen Katsanos, who pulls down $229,333 as a public affairs official for the Federal Deposit Insurance Corporation (FDIC). And the third highest-paid federal public relations employee is Titus Simmons, also of the FDIC, at $215,248, according to “Mapping The Swamp,” [1] a new report compiled by Open The Books, an independent nonprofit that tracks federal spending using the government’s own numbers.

In fairness to Cochrane, the USPS is a semigovernment corporation and had to contribute $5.8 billion to pre-fund postal retiree health care costs. Without the pre-funding, the USPS would have shown a $200 million profit, according to official postal data. The pre-funding is the focus of an intense and long-running debate between USPS officials and Congress.

Even so, the 3,618 government spinmeisters are a tiny segment of the 1.97 million career federal civil servants the report tracks. The review doesn’t include more than 700,000 civil servants employed by the Department of Defense, any of the uniformed members of the U.S. military, or those working in the U.S. intelligence community.

“Mapping The Swamp” may be the most comprehensive and creative report ever compiled on the true size and cost of the federal government. These 10 findings highlight the hundreds of previously undisclosed facts contained in the report:

4.) On average, federal workers get 10 paid holidays, 13 paid sick days and 20 paid vacation days each year. If all of them took full advantage of their paid leave, it would cost taxpayers more than $22 billion.

5.) Hundreds of federal workers get cash bonuses every year. The highest such bonus last year went to a human resources manager who received $141,525!

6.) More than 35,000 lawyers are employed by the federal government but only a third of them work for the Department of Justice. Collectively, the government lawyers were paid $4.8 billion in 2016.

7.) There are 3,498 police officers working for the Department of Veterans Affairs at a cost of $172 million. But officials there can’t provide data for the number or kinds of crimes committed on VA property.

9.) Between them, the USPS and the VA employ more than half of the total federal workforce covered by the report.

10.) There are an additional two million federal workers at the Department of Defense and the U.S. military.

“We found small and large agencies across the federal government gaming the system for personal gain — and it’s expensive for the taxpayer,” Open The Books CEO and founder Adam Andrzejewski (pictured at the top of this article) said in a media release.

“Congress should hold hearings to bring transparency to all the information we’re still missing, including performance bonuses and pension payouts,” he also said. “It’s time to squeeze out waste from compensation and stop abusive payroll practices.”