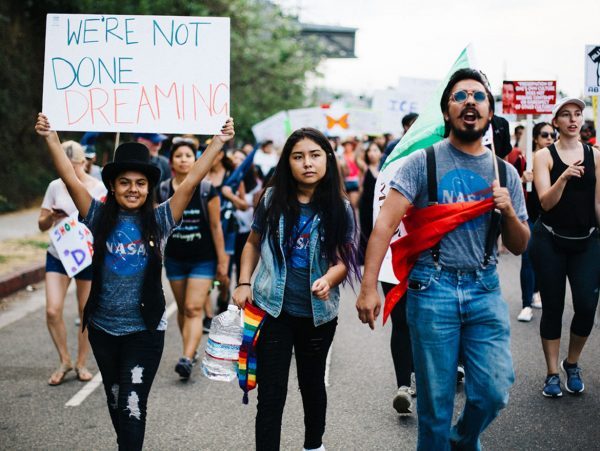 The Security, Enforcement, and Compassion United in Reform Efforts (SECURE) Act would incorporate many of the immigration reform principles [2] President Donald Trump established as a condition for any deal on the DACA program.

It also pulls in other immigration bills that have been proposed in recent years.

“This plan is fair to all parties,” Grassley said in a speech on the Senate floor. “It’s pro-American. And it’s a solution to DACA.”

The proposal drew criticism from both sides of the immigration debate.

Andrew Moriarty, deputy organizing director of the left-wing group FWD.us, tweeted that Congress should just pass the Development, Relief, and Education for Alien Minors (DREAM) Act — and drop the provisions favored by Trump.

“I know [the] length of a bill is far from best way to evaluate legislation, but bipartisan DREAM Act is 35 pages long, you can read it and understand what it does pretty easily — the SECURE Act is 526 PAGES LONG — necessary to include sprawling anti-immigrant wish list,” he tweeted.

Sen. Richard Durbin (D-Ill.), a DREAM Act sponsor, said in a statement the SECURE Act is not a good-faith effort to protect the dreamers whose parents brought them to the U.S. as children.

“The laundry list of unrelated immigration bills which they have offered is designed to delay and stop any bipartisan effort to solve this crisis created by the Trump administration on September 5th,” he stated. “I will continue my efforts to reach a bipartisan agreement to pass the DREAM Act.”

But William Gheen, president of the Americans for Legal Immigration political action committee, said any provisions improving border security are unnecessary and included only as “worthless lubricant” to get amnesty.

“This is so terribly disappointing,” he said. “Until they can prove they can protect American citizens from getting raped and murdered by illegal aliens, there’s no reason to talk about broader goals.”

Other advocates of tough immigration enforcement reacted more cautiously. Ira Mehlman, a spokesman for the Federation for American Immigration Reform, said his think tank it studying the bill and is withholding judgment until analyzing the details.

“It looks like this could be the real deal,” said Jessica Vaughn.

“On the surface, it’s something that looks like it would be good, but we want to make sure there are no landmines,” he said.

Jessica Vaughan, director of policy studies at the Center for Immigration Studies, said she, too, has not examined the fine print. But she said it is interesting that the co-sponsors include immigration hawks Sens. Tom Cotton (R-Ark.) and David Perdue (R-Ga.), along with Sens. Thom Tillis (R-N.C.) and James Lankford (R-Okla.), who have been more open to legal status for illegal immigrants. Sen. John Cornyn (R-Texas), the number-two Republican in the Senate, also has signed on as a co-sponsor.

“I was very intrigued, because it seems to represent a very wide range of views … It looks like this could be the real deal,” Vaughan said of the bill.

The SECURE Act cobbles together several legislative proposals. One is the Bar Removal of Individuals Who Dream and Grow our Economy (BRIDGE) Act, originally sponsored by Rep. Mike Coffman (R-Colo.). It would for three years codify the terms of DACA, created by executive action during the presidency of Barack Obama.

“Congress has a responsibility to secure our borders and address the legal uncertainty facing the DACA-eligible population,” Cornyn said in a statement. “The SECURE Act takes concrete steps to accomplish both objectives by helping prevent future illegal immigration while providing Congress with more time to work on a long-term solution for undocumented children.”

The bill also includes the Reforming American Immigration for Strong Employment (RAISE) Act [3], a proposal by Cotton and Perdue to switch to a merit-based immigration system and sharply reduce family-sponsored “chain migration” to the U.S.

Related: Democrats Threaten to Shut Down the Government if No DACA Amnesty [4]

“This legislation would go a long way to building an immigration system that supports the American worker, and there’s simply no good reason for either party to oppose it,” Cotton said in a statement.

Other provisions in Grassley’s legislation include: