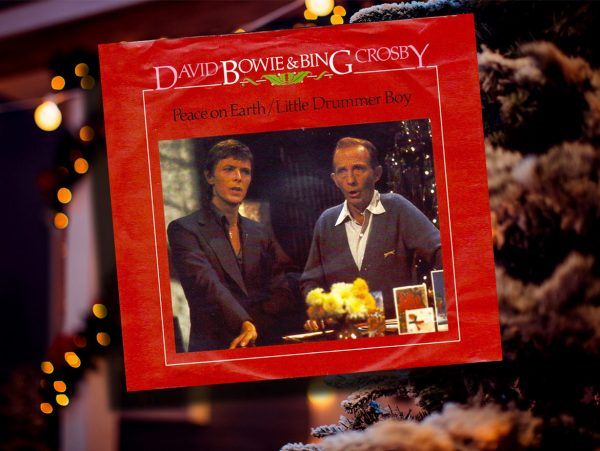 It was one of the most successful duets in music history. It may also have been one of the oddest. One performer was a 73-year-old crooner from the 1940s who wore cardigan sweaters. The other was an androgynous 30-year-old British glam rocker.

Bing Crosby and David Bowie could not have been more of a contrast. They came from different countries and different eras, and had different ideas about music, life, and the world — but the surreal story of how these two unlikely collaborators came to make one of the world’s most memorable songs is itself a Christmas classic.

It turns out that Crosby was on tour in Great Britain at the time, so coming up with the theme of his upcoming “Merrie Olde Christmas” special for CBS was easy: Christmas in England. Bowie would be one of several hip guest stars, along with the model Twiggy and “Oliver!” star Ron Moody. As an added incentive to lure the popular Bowie into the mix, producers agreed to promote the video of his latest single, “Heroes.”

Bowie agreed, though it wasn’t the promotion that closed the deal. Bowie’s mom actually loved Bing Crosby — so he agreed to appear on the show for her.

Crosby, it turns out, had teenaged children, and they were big Bowie fans — such big fans they insisted on being on the set to see the avant-garde rocker for themselves. On Sept. 11, 1973, they got their wish.

“The doors opened and David walked in with his wife,” Mary Crosby recalled several years ago. “They were both wearing full-length mink coats, they had matching full makeup, and their hair was bright red. We were thinking, ‘Oh, my God!'”

Bing’s son Nathaniel remembered there was tension on the set early on, and that some producers weren’t very pleased with Bowie. “It almost didn’t happen,” Nathaniel Crosby recalled. “The producers told him to take the lipstick off and the earring out. It was just incredible to see the contrast.”

Bowie acquiesced, and the work began. The writers of the show wisely worked the intergenerational awkwardness of the musical collaborators right into the script.

The premise of the skit was simple: Bing Crosby walks through an old London mansion to answer the door. It turns out the young man who’d just rung the bell was David Bowie.

“Are you the new butler?” Bowie asks Crosby as he enters the home.

“It’s been a long time since I’ve been the new anything,” Crosby replies.

Bowie’s friend, we learn, lives in the house, and he sometimes wanders over to play his piano. Crosby is visiting relatives who own the house. The two continue their light banter.

“You’re not the poor relations from America, are you?” Bowie asks Bing, knowing his friend had invited relatives from America to stay.

“News sure travels fast, doesn’t it?” Crosby replies. He then holds out his hand and says, “I’m Bing.”

“You’re the one that sings, right?” Bowie asks.

“Right or wrong, I sing either way,” Bing replies.

“Mostly contemporary stuff,” Bowie replies. “Do you like modern music?”

“Well, I think it’s marvelous. Some of it is really fine,” Bing says. He then asks Bowie, “Tell me, do you ever listen to some of the older fellas?”

“Oh yeah, sure. I like John Lennon. And the other one. Harry Nilsson,” he replies.

“Hmmmm, you go back that far,” Bing says.

“Yeah, I’m not as young as I look,” Bowie replies.

“None of us is these days,” says Bing.

It was a great idea: two multinational music stars from different generations pretending not to know one another. In a deep sense, they were making fun of themselves, as well as the fleeting nature of pop fame.

The two then talked about Christmas and their favorite holiday tunes as they stood next to a baby grand piano and exchanged sheet music.

The script then called for Bowie and Bing to begin singing, “Little Drummer Boy.” This is when things headed south. It turns out Bowie hated the song — and refused to sing it.

“‘Is there something else we could sing?'” composer Ian Fraser remembered Bowie asking as they reviewed the script. “We didn’t know quite what to do.”

Related: The Gospel According to ‘Peanuts’ Creator Charles Schulz [1]

So they did what they had to do: They improvised. Fraser, along with co-writers Buz Kohan and Larry Grossman, left the set and found a piano in the studio’s basement. In about an hour, they came up with an alternative. They created an original song, “Peace on Earth,” and worked out an arrangement that tied together this new tune with the old Christmas classic. Bowie loved the melody and agreed to perform it.

On Sept. 11, 1977, with less than an hour’s worth of rehearsal time, Bowie and Bing nailed the performance. A few days after the taping, Crosby said of Bowie, “He sings well, has a great voice and reads lines well.” That’s high praise from a man who knew more than a thing or two about voices and reading lines.

“Peace on Earth/Little Drummer Boy” would turn out to be one of the last songs Crosby ever recorded, as well as the last Christmas special he would ever make. Just a month later, Crosby died of a massive heart attack after completing a round of golf. One month later, posthumously, “Bing Crosby’s Merrie Olde Christmas” aired on CBS. The special was introduced by Bing’s widow, Kathyrn Crosby.

In the intervening years, the song became a Christmas staple. It was released as a single in 1982, and it continues to chart in the Christmas season around North America and Europe. It also became one of the best-selling singles of David Bowie’s career.

That’s the story of how “Peace on Earth/Little Drummer Boy” came to be. We have a few very talented songwriters who performed some miraculous musical surgery to thank for it.

And the God-given talents of two of the most unlikely — and most beloved — performers of their respective generations.