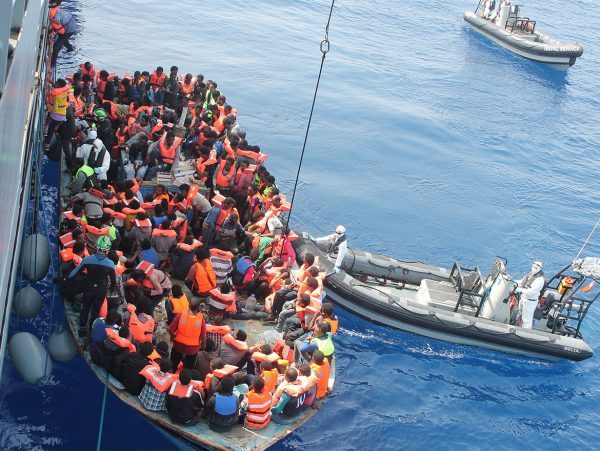 President Donald Trump has faced tough sledding in persuading uncooperative countries to take their citizens back after they’ve been ordered to be deported from the U.S.

The Trump administration announced in September it would impose sanctions [1] on four small countries that have thwarted U.S. efforts to deport citizens from their nations.

Representatives from the State Department and the Department of Homeland Security did not respond last week to inquiries from LifeZette about whether those countries — Guinea, Sierra Leone, Eritrea, and Cambodia — have made meaningful changes to their policies. But immigration experts said a combination of court rulings and resistance from foreign countries has frustrated the administration’s efforts.

Jessica Vaughan, director of policy studies at the Center for Immigration Studies, said the move in September signaled a new, aggressive policy toward “recalcitrant countries,” what the federal government calls nations that fail to cooperate — or outright refuse — to repatriate their citizens.

“But they’ve hit other roadblocks,” she said. “So they haven’t actually been able to do it.”

Vaughan pointed to a June ruling by a federal judge in Michigan blocking the deportation of about 100 Iraqi citizens who argued they faced persecution if returned to their home country. Some of them came to the United States as children and committed crimes long ago but had been able to remain in the United States because Iraq would not take them back.

Immigration and Customs Enforcement (ICE) officers arrested them after Iraq agreed to take them as part of a deal to remove the country from Trump’s original list of countries covered by a temporary ban on travelers from terrorism-compromised countries.

The setback in Iraq notwithstanding, the Trump administration has made some progress. Federal authorities announced earlier this year that the pressure tactics begun at the end of former President Barack Obama’s administration and ratcheted up under Trump’s had cut the number of problem countries from 23 to a dozen.

The visa sanctions imposed by the Trump administration ranged from denying Eritrean residents B visas for business or pleasure travel to the United States to denying such visas to employees of the Cambodian Ministry of Foreign Affairs with the rank of director general and above, and their families. For Sierra Leone, the B visa sanctions apply to employees of the Ministry of Foreign Affairs and immigration officials.

Meanwhile, sanctions imposed on Guinea targeted government officials and their immediate family members, and include B visas along with F, J and M visas for student and exchange programs.

“This is certainly a step in the right direction on the part of our country,” said Ira Mehlman, a spokesman for the Federation for American Immigration Reform. “There has to be some indication that we’re taking this seriously.”

The Trump administration has taken steps on its own that some Republican members of Congress proposed enshrining in law [3]. Vaughan said if the countries do not respond to the initial round of penalties, the U.S. government needs to raise the stakes.

“We need to turn up the heat a little bit and widen the visa sanctions,” she said.

If the countries do not respond to the initial round of penalties, said Vaughan, the U.S. government needs to raise the stakes. “We need to turn up the heat a little bit and widen the visa sanctions.”

Even if the Trump administration succeeds in forcing changes in Guinea, Sierra Leone, Eritrea and Cambodia, it would barely scratch the surface of undeportable foreigners living in the United States.

“There are a couple of big ones that are still a problem for ICE,” Vaughan said.

More than 5,700 citizens of the four targeted countries had final deportation orders, according to the most recent figures from ICE. For context, 97,589 people from a dozen recalcitrant countries were under orders to deport, although that is down sharply from October 2016, when a report released by then-Sen. Jeff Sessions (R-Ala.) showed that 242,772 people with deportation orders came from uncooperative or recalcitrant countries.

Mehlman acknowledged that large countries in which the United States has many and varied interests pose a greater challenge than a country like Eritrea.

“Some countries we have more leverage over than others,” he said.

But Mehlman said the Trump administration should not shy away from pressing countries like China for concessions on the repatriation of deported citizens.

“Trump seems to pride himself on having a good relationship with the Chinese leadership,” he said.

Vaughan agreed. “We should start looking to other aspects of our relationship with these countries,” she said.

For example, Vaughan said, the United States could make changes to an agreement the United States struck with Cuba during Bill Clinton’s administration to accept 20,000 Cubans a year into the United States. About 5,000 of that total comes from immigrants eligible for family-sponsored visas. But Vaughan said the rest come from a visa lottery run by the State Department specifically for Cubans in the 1990s. The United States is still processing applicants from among the 541,000 Cubans who sought to immigrate to the country in fiscal year 1998.

Rather than accepting new immigrants, Vaughan said, the United States could count undeportable Cubans already in the country against the total.

Related: How Trump Is Pressuring Countries to Take Back Their Illegal Immigrants [1]

“Different things are going to work with different countries,” she said.

Canada also has a problem with countries that do not cooperate with repatriating citizens targeted for deportation. Unlike the United States, however, the Canadian government has a strict policy against naming those recalcitrant countries.

“If a country won’t take back their foreign nationals, CBSA [Canada Border Services Agency] does not give up; it continues to work with other government partners to put pressure on the country to accept their citizens back,” spokesman Barre Campbell told CBC News last week.