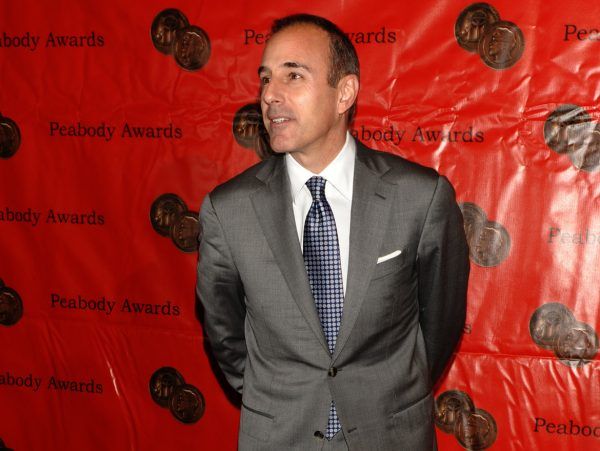 NBC News Chairman Andy Lack emailed the network’s employees Wednesday morning to inform them that longtime “Today” show host Matt Lauer had been fired after NBC received “a detailed complaint from a colleague about inappropriate sexual behavior in the workplace” on Monday night.

Lauer thus followed in the footsteps of former CBS News legend Charlie Rose, who was fired from CBS after eight women accused him of sexual misconduct and harassment.

“This is truly a case of a wolf in sheep’s clothing,” Media Research Center (MRC) President Brent Bozell said in a statement Wednesday about Lauer. “These allegations are shocking, but perhaps we shouldn’t be surprised by his behavior. Remember, this is a man who once attempted to dismiss Bill Clinton’s sex scandals as ‘personal peccadilloes.'”

To commemorate Lauer’s ouster, MRC’s NewsBusters reposted an article [1] it wrote in January called “Matt Lauer: 20 Years of Bias in the Morning.” The article highlighted 20 of Lauer’s “worst quotes” showing his liberal bias.

In May of 2000, the NBC host talked about “the loss of opportunity which frustrates Bill Clinton and also must frustrate the American people” with Clinton embroiled in personal scandals.

“So will the lesson that will be learned out of all this … be that maybe we go back to a time where we give less scrutiny to a president’s personal life, back to the Kennedy and Eisenhower and Roosevelt years?” Lauer asked historian Doris Kearns Goodwin. “I hope that the American people would find it more exciting to talk about health care and Social Security and not about these personal peccadilloes.”

During an interview with Microsoft co-founder Bill Gates in February 1998, Lauer bemoaned how the Monica Lewinsky scandal had consumed the nation.

“Do you think it’s gotten to the point where possibly there is a chance that there is too much information on this particular subject?” Lauer asked Gates. “As our partner I’m sure you watch our programming, you’re probably a news junkie like the rest of us. Do you think though that we as journalists have gone overboard on this story?”

Lauer also was often filled with praise for former President Barack Obama during interviews even before Obama was elected. Back in October 2008, Lauer practically gushed over Obama.

“People have called you ‘The Savior,’ ‘The Messiah,’ ‘The Messenger of Change.’ The expectations have been raised to such a level …” Lauer said to Obama. “If you are, as you just say, lucky enough to be elected the next president, are you going to have to consciously manage expectations during the first several months of your administration?”

Although Lauer appeared to have no issue with Americans criticizing Bush, during an interview with former Defense Secretary Bob Gates in January of 2014, Lauer bristled at the “dishonorable” criticism of Obama in Gates’ new book.

“As this criticism is leveled by you in the book of the commander-in-chief, the acting commander-in-chief, at a time when some 40,000 U.S. troops are in harm’s way, do you think that by calling him into question at this stage it is either dangerous or dishonorable?” Lauer asked Gates.

During an interview with former President George W. Bush back in April 2013, Lauer made sure to emphasize “the Supreme Court decision that resulted in your moving into the White House” and leading a country that “was divided.” Noting that “there was so much controversy when you came to office,” Lauer asked Bush about “perhaps the most controversial decision of your presidency, invading Iraq” after phrasing the entire lead-up to the question in the most negative light possible.

Lauer also worried that the Bush administration was bringing about the apocalypse by pushing back against global warming arguments back in January 2007.

“A controversy in Washington over what literally could be the end of the world as we know it. Did the Bush administration freeze out scientists trying to sound the alarm on global warming?” Lauer asked.

The fired “Today” show host also offered a jab at capitalism and looked fondly back on communism back in February 2004 when discussing the political shifts in Russia’s history.

“Russia’s rush to capitalism left the vast majority scrambling to survive. For many, life is worse than it was in Soviet times,” Lauer said.