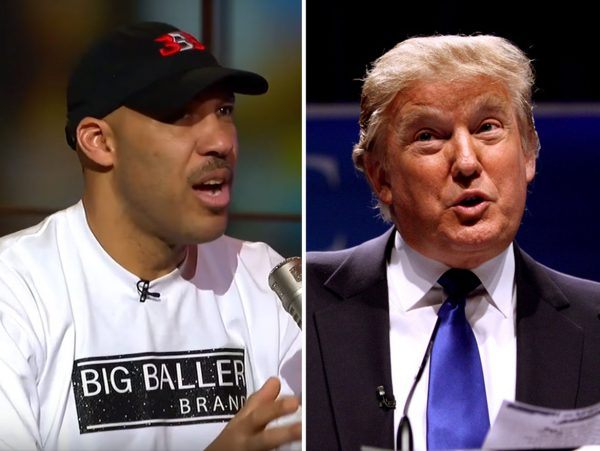 Since he rose to notoriety this year, LaVar Ball, the father of Los Angeles Lakers point guard Lonzo Ball, has used the media to turn himself into a quasi-celebrity. In doing so, he’s also made quite a few powerful enemies.

About two weeks ago, Ball’s middle child, LiAngelo, was one of three UCLA basketball players who was arrested in China for shoplifting — a crime that carries a sentence of anywhere from three years to 10 years in that country, according to Yahoo Sports. The sentences were avoided, however, when President Donald Trump personally asked Chinese leader Xi Jinping to resolve the international conflict.

Jinping did — and the players were let go. The players even thanked Trump in their scripted statements later in the week. LaVar Ball, however, was not so appreciative of the commander-in-chief’s efforts.

“Who?” he said to ESPN last Friday when asked about the president’s involvement in freeing his son. “What was he over there for? Don’t tell me nothing. Everybody wants to make it seem like he helped me out.”

Trump responded to this claim Sunday night on Twitter, saying, “Now that the three basketball players are out of China and saved from years in jail, LaVar Ball, the father of LiAngelo, is unaccepting of what I did for his son and that shoplifting is no big deal. I should have left them in jail!”

Anyone who has followed LaVar Ball’s antics this year may be less shocked by his anti-Trump words. After all, Ball has displayed a brash overconfidence in himself and his family this past year.

Earlier in 2017, before his son Lonzo even played a game in the NBA, LaVar told ESPN that Lonzo was better than Golden State Warriors point guard Steph Curry [1] — who was the NBA’s Most Valuable Player in both 2015 and 2016.

To add some context here, through 17 games this season, Lonzo Ball’s .313 field goal percentage ranked lower than that of all 126 other qualified players, according to the official NBA website.

One month after his claim that his son was better than one of the NBA’s best players, LaVar Ball told USA Today that he himself would “kill Michael Jordan one-on-one” in a pickup game of basketball. LaVar played one season of college basketball at Washington State — and averaged just 2.2 points per game, according to Basketball Reference.

Jordan responded to this claim back in August, telling Slam Online that even if he only had one leg, he could still beat Ball one-on-one.

Ball — who uses the attention he gets to try to sell his Big Baller Brand sneakers for as much as $1,200 per pair online — has also been accused of both racism and sexism for some other outrageous claims he’s made. (Ball is founder and CEO of Big Baller Brand.)

Related: 10 Pro Athletes Who Served Their Country in the Military [2]

In May, Ball appeared on “The Herd with Colin Cowherd” on Fox Sports and ignored female host Kristine Leahy for most of the interview. When she finally asked how many Big Baller Brand sneakers Ball had sold, he snapped.

“Stay in your lane,” he said to her. “I don’t even worry about her over there. She scares me. I don’t look over there because I’m scared of her. I’m thinking assault right now. Leave me alone.”

Just two months later, Ball — who coached the Big Baller Brand AAU basketball team — got a technical foul for his antics and promptly threatened to pull his team from the court if the referee, a woman, was not replaced. The female referee was replaced mid-game to keep things moving along, according to USA Today.

“Realistically you can’t win no championship with three white guys because the foot speed is too slow,” claimed LaVar Ball.

“She got a vendetta because she’s a woman who’s trying to act — I get that she’s trying to break into the refereeing thing,” he told ESPN of the incident. “But just giving techs and calling fouls, that’s no way to do it.”

Ball has also expressed an anti-white sentiment, telling the Inland Valley Bulletin that UCLA did not win the National Championship last season because the team had three white starters: Bryce Alford, T.J. Leaf, and Thomas Welsh.

“Realistically you can’t win no championship with three white guys because the foot speed is too slow,” he said. “I told Lonzo, ‘One of these games you might need to go for 30 or 40 points.’ It turned out that was the one game. Then once they get to the Elite Eight, they’re right there.”

Since LaVar Ball always manages to push his way into the news, this individual’s conflict with President Trump is likely far from over. The biggest question now, however, is: What will he say next? And to whom will he say it?