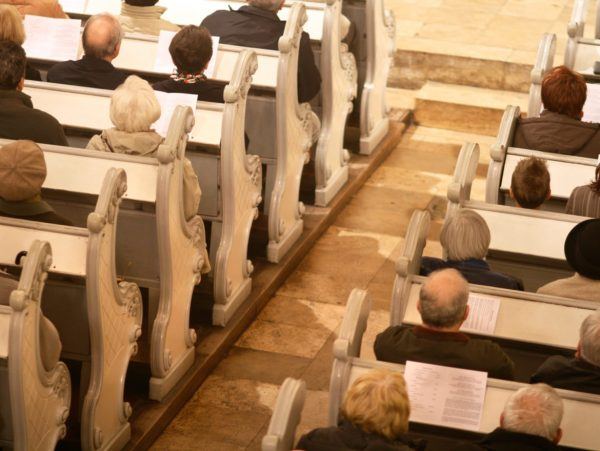 Each Sunday at divine worship, most Christians — at least members of liturgical, orthodox churches — recite some version of the Nicene Creed. This statement of faith, first produced at the Council of Nicea in present-day Turkey, in 325 A.D., affirms, as a matter of faith and revelation, that Christ will come to “judge the living and the dead.”

Those words, which slip so easily from our lips as thoughts turn to brunch or post-worship shopping, should give us all pause for contemplation. It is not fashionable to hear about judgment; in fact, nonjudging is almost the defining issue for the politically correct, as in, “Who am I to judge?”

When did you last hear a strong sermon on the reality of judgment during a service? Many pastors seem to shy away from this because it might make people “uncomfortable” — precisely what ought to happen when considering the prospect of facing the Lord of heaven and Earth.

All of us who dare to use the name “Christian,” and declare our allegiance to the Master, will be judged by Him. However, the awe-inspiring words of the creed also proclaim that He will not only judge Christians, but all will be judged — living and dead, when Christ comes as judge, whether we believe in Him or not. We know, from the very words of Jesus, what criteria He will use for the judgment — the Gospel passage we hear every year around this time as the church considers the “end times” — clothing the naked, visiting the sick, visiting those in prison, welcoming strangers, etc.

All these, as St. Mother Teresa of Calcutta so famously described them, are Christ in His “distressing disguise.” This passage, rather than inspiring fear in nonbelievers, should actually inspire hope: The virtuous in the Gospel passage do not recognize that they are serving Jesus in their acts of charity. So the nonbeliever — if he or she is doing these good works — has a firm hope for a merciful judgment. Yet the Christian who recites the creed each Sunday is called to something more. That Christ should be served in His distressing disguise is a given, but St. Paul tells Christians in the Letter to the Galatians that we should do “good to all men — but first to the members of the household of the faith.”

Related: What We Never Knew About the Last Judgment [1]

Proclaiming each Sunday that we believe we are going to be judged becomes problematic when we consider the weak and lethargic response of many — perhaps most — Western Christians to the massive persecution of Christians in other parts of the world, especially in the Middle East. They, like all others, are “members of the household of the faith.” If any of our blood brothers or sisters were in dire need, having lost their homes and possessions and facing the possibility of death, would our lives carry on as normal?

To be named a follower of Jesus — and to publicly reaffirm that allegiance each Sunday with the recitation of the Creed — will bring a judgment. For the Christian, the ties to the other members of the “household of the faith” are deeper than the ties of blood family. That is not pious talk — it is Gospel truth. Our brothers and sisters in Christ are facing genocide in the Middle East, vicious and violent persecution in Pakistan, Nigeria … It’s actually hard to find a country in which Christians do not face some form of persecution.

Pope Francis has stated that Christians are facing a level of persecution not seen since the first centuries of the church; in fact, statistically, the persecution is much worse.

What has been the reaction to this ongoing reality from the believers of the West — the “creed-speakers” who profess their faith in judgment? Has there been a “Million Christian March” on D.C. to protest and demand action? Have the bishops and parish priests demanded that their congregations use their vote to aid and advocate for the persecuted (and not just once a year)? What of the politicians who proclaim their Christianity loudly every time an election comes around, or the Catholics who proudly wear their smudged ashes on their foreheads every Ash Wednesday?

Apart from notable individuals — and some extraordinary initiatives by some groups, like the Knights of Columbus or the work of Rev. Franklin Graham and Samaritans Purse and many others, all praiseworthy and important — the reaction of the vast majority of those who worship each Sunday, both clergy and laity, has been stunningly underwhelming. But judgment is coming.

Donald J. Trump has the opportunity to go down in history as the president who saved the Christians of the Middle East by protecting them where they are.

In 1939, a bill was introduced in Congress to allow 20,000 German Jewish children to immigrate to the United States. The bill failed — President Franklin Roosevelt, the darling of the progressives — refused to speak out. Later that year, the U.S. turned away a ship, the St. Louis, that was carrying 935 German Jews — the people were sent back to Europe. There, more than 254 of them died in the Holocaust; FDR again did nothing. President Donald J. Trump has the opportunity to go down in history as the president who saved the Christians of the Middle East [3] by protecting them where they are — and by prioritizing them for immigration to the United States, however politically incorrect that may be.

Where genocide is concerned, political correctness is the last thing that should influence policy.

If Christians are not prepared to do everything in their power to help the “members of the household of the faith,” it might be better to stop saying the creed each Sunday and focus on what seems really important, like holiday shopping bargains or football — but a judgment is coming.