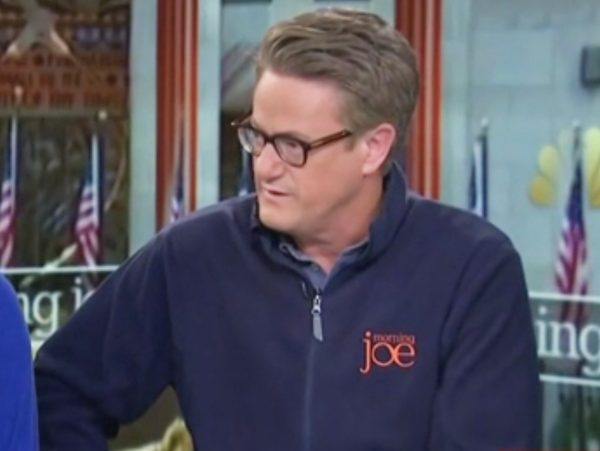 MSNBC “Morning Joe” co-host Joe Scarborough compared President Donald Trump to dictators Mao Zedong and Josef Stalin on Thursday, after the president lashed out at the “fake news” media for its biased coverage.

Scarborough, his co-hosts, and the show’s contributors lashed out at Trump for a tweet Wednesday evening in which he said: “Network news has become so partisan, distorted and fake that licenses must be challenged and, if appropriate, revoked. Not fair to public!”

On Wednesday morning, the president renewed his complaints against the mainstream media, tweeting, “The Fake News Is going all out in order to demean and denigrate! Such hatred!”

Scarborough and the “Morning Joe” panel said they were horrified by the president’s attacks on media outlets that deliver overwhelmingly negative coverage of him, as they accused Trump of undermining and seeking to destroy the First Amendment and freedom of speech.

“Of all the things, the shocking things the president has said — and he’s said so many — channeling Chairman Mao and Josef Stalin by calling the media ‘enemy of the people’ — saying that First Amendment rights, saying the ability of newspapers to write what they want to write is, quote, disgusting and someone should look into it, may be the most frightening of all and the most disgusting,” Scarborough said.

“And now you have a president who is actually dismissing the most sacred right Americans have had since 1787, the right of free speech,” Scarborough continued. “And the fact that he’s talking like that in a way that no other president has ever spoken in American history, shown complete ignorance of the Constitution and the law, 240 years of precedence shows again that he is just, he’s disconnected.”

“Morning Joe” co-host Mika Brzezinski chimed in, warning that the president is “not fit” to serve in the role the American people elected him to fulfill in November 2016.

“And I think we’re at the point where the conversation has changed,” Brzezinski said, adding that the president’s comments represent “an unraveling, at the very least, of this man’s personality.”

Scarborough said that GOP senators trying to work with Trump on passing his “America First” agenda “need to stop, they need to listen, and they need to understand that the president of the United States said that he was going to look into undermining and actually destroying the most sacred right, constitutional right, that Americans have had.”

“The president should be aware, perhaps he is, that we’ve reached a new phase amongst people around him that the whispers you used to hear only on the Left about the notion that he should be removed, or that it’s the presidency in crisis, is now said by people who are friends of the president, who are advisers to the president,” MSNBC political analyst Mark Halperin said. “Their concern about his state of mind and his ability to do the job is higher than it has been since he got sworn in. And comments like he made yesterday only feed that.”

BBC journalist Katty Kay attempted to push back against the media’s nonstop coverage of Trump’s criticism, saying that the president’s tweet may serve as a “deliberate attempt to get us all talking about the press” instead of about important issues the country is facing.

“And you put out that shiny object which he feels … for him has worked, you know, chuck out fake news. It’s red meat to his base,” Kay said. “And you know, the more we make this a story the more we talk about it, the more we are actually enabling his ability to froth about something … whilst real things are going on.”

“NAFTA is about to fall apart, we may be about to pull out of the Iran nuclear deal, major cuts are being made in environmental protection this week, women’s health rights have been rolled back. But for our fake news, we will all talk about it,” Kay continued. “And I think we have to be careful about the way we approach this story.”