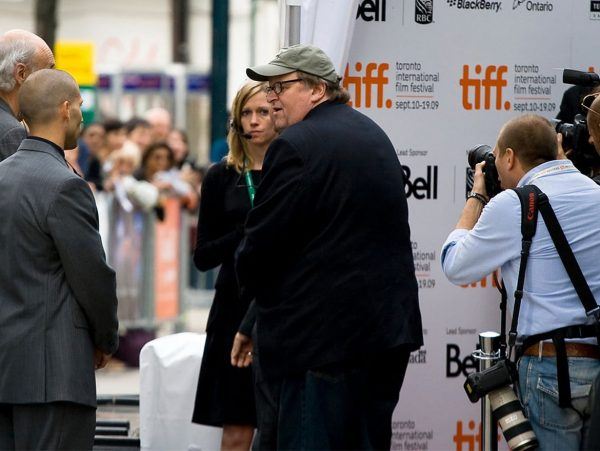 If Michael Moore admitted to voting for Donald Trump in the 2016 presidential election, it would not be much of a surprise.

Despite his constant complaining about the president, the filmmaker has used the man as a platform to launch a much-needed career comeback. The problem? Nobody seems that interested in Moore coming back.

After releasing a last-minute film titled “Michael Moore in TrumpLand” last year to capitalize on the presidential election, Moore dove head first into Broadway. His play, titled “The Terms of My Surrender,” just wrapped a 13-week run with a grand total of $4.2 million from the box office, according to Broadway World.

The play was themed around the president and got plenty of press attention, but it clearly didn’t speak to many people.

“The Glass Menagerie,” the play that occupied the same theater before Moore’s “Surrender,” managed to make $5.4 million after 85 shows. Moore’s play had 83 performances.

The figure for Moore’s play is horrible when you consider that “Menagerie” got nowhere near as much press attention.

The reviews for Moore’s play were also bad.

“I have no political beef with Moore … but I found myself cringing at the self-congratulatory applause that would break out when he would utter one of his pieties. And I lost patience with the way he seemed to want both sympathy for being a victim of the right and adulation for being the champion of all mankind,” read a Los Angeles Times review.

A New Yorker review said Moore “doesn’t have a late-night comedian’s timing. He punctuates his own jokes with nervous giggles, mumbles between lines, and, despite his baggy frame, has little sense of himself as a physical comedian.”

Despite the flop of a show, Moore told The Wall Street Journal in an email that he was considering taking his Broadway show on the road.

Moore was a liberal who was in an awkward position when Obama was president. Despite the former president’s having done plenty that should have upset the supposedly anti-war “rebel” documentary filmmaker, Moore mainly stayed quiet. He saw no benefit in going after a Democrat.

Those eight years of near-silence from the usually headline-hungry Moore lost him any small bit of credibility he had with audiences. He’s trying now to desperately win it back by cashing in on Trump hysteria. The problem for him is that people just don’t want to hear it, especially from a hypocrite like Moore.