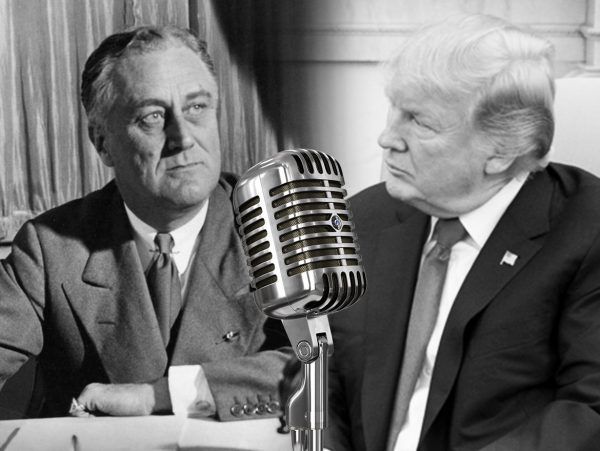 After President Donald Trump mused on Twitter on Wednesday that it might be appropriate to challenge NBC’s broadcast license as punishment for “fake news,” the cascade of outrage was predictable.

CNN treated it as a two-day story, even as legal analyst Jeffrey Toobin acknowledged on Wednesday that there is virtually no chance that NBC is actually going to lose its license.

“Clearly it can’t happen today,”Scarborough said. “But when you have the president of the United States for the first time in American history making a suggestion like this, you know, I think it has an impact.”

First time in history? As it applies specifically to television licenses, perhaps. But American history is replete with presidents’ exercising power — and not just speech — against enemies in the press.

He noted that the nation’s second president, John Adams, used the Alien and Sedition Acts to jail publishers who printed unfavorable stories. Abraham Lincoln, Woodrow Wilson and Franklin Roosevelt all used national security justifications during wartime to take actions against newspapers, he said.

“Political speech has been restricted many times in American history,” Shirley said.

FDR and the Press
Perhaps none of Trump’s modern predecessors took more aggressive action against the media than FDR, one of the most lionized figures on the Left in the past century. A Politico story earlier this year detailed a number of provocative exchanges between Roosevelt and the press that today might be described as Trumpian.

According to Politico, Roosevelt once embarrassed a reporter by giving him a dunce hat and ordering him to stand in the corner. At the end of a 1942 news conference, he handed a Nazi Iron Cross to a reporter and asked him to give it to a New York Daily News columnist who had been critical of the administration.

Betty Houchin Winfield detailed Roosevelt’s relationship with journalists in her 1980 book, “FDR and the News Media.” She describes Roosevelt’s White House press secretary, Steve Early, as something of an enforcer who was willing to bully radio stations into compliance if necessary.

Roosevelt generally enjoyed a cozier relationship with radio station owners than his often-hostile newspaper publishers. According to “FDR and the News Media,” radio stations usually agreed to donate airtime for the president’s speeches.

“When they did not, Early retaliated,” Winfield wrote, describing the press secretary’s efforts to punish a pair of Los Angeles radio stations that had refused to carry Roosevelt’s September 1936 “fireside chat” on a drought.

“We can afford to eliminate [campaign advertising from] KFI and KECA,” he wrote to Democratic Party publicity director Charles Michelson. “I hope we will and that we also will announce when the next program goes out over the chain of which these stations are members, that the Committee had requested their elimination.”

Roosevelt did more than threaten to yank campaign ads. According to Reason magazine, the Federal Communications Commission — which formed in 1934 to replace the Federal Radio Commission — cut the renewal period for radio broadcast licenses from three years to just six months. The magazine reported that the first secretary of the FCC, Herbert Pettey, had overseen radio for the 1932 campaign and worked with the Democratic National Committee to handle “radio matters.”

According to Winfield’s book, the White House closely monitored radio licenses and took steps to prevent his rivals who headed newspapers from acquiring radio stations.

“He especially did not approve of the manner in which the FCC commissioners seemed to grant licenses almost automatically,” she wrote.

Efforts to Block Critics
The book recounts that the president urged Early to “get in touch with [FCC Commissioner Frank] McNinch and ask him if there is something we can do to keep the Wichita Falls papers, who are opposed to Congressman [William] McFarlane, from getting control of the radio.”

In 1940, at a time that publishers owned a third of the airwaves, Roosevelt implored the FCC to make a statement “divorcing press and radio.”

After hearing a rumor in 1943 that a grouped headed by Chicago Tribune publisher Robert R. McCormick and New York Daily News founder Joseph Medill Patterson had offered $10 million for NBC Blue Network, Roosevelt lashed out, according to the book. “I think that this ought to be stopped without any question. It is bad enough to have them on Mutual [Broadcasting System].”

Lest anyone interpret FDR’s posture as good-government opposition to media consolidation, Winfield wrote that FCC Chairman James Fly sent a questionnaire to radio stations in 1941 and discovered that RCA President David Sarnoff and CBS CEO William S. Paley controlled what more than half of people heard.

NBC and Columbia controlled 86 percent of total night-time radio power, and Fly warned about the danger of so much media power in so few hands.

But Roosevelt was not concerned about Sarnoff and Paley, according to Winfield, and Early intervened to try to get the FCC to back off the investigation.

The Roosevelt administration rarely found heavy-handed tactics to be necessary when dealing with radio executives, according to the Reason story. Often, they enjoyed the kind of editorial influence over programming that Trump could only dream of from even his most sympathetic media outlets.

NBC announced that it was limiting broadcasts “contrary to the policies of the United States government,” while CBS Vice President Henry A. Bellows declared that “no broadcast would be permitted over the Columbia Broadcasting System that in any way was critical of any policy of the administration.”

His company, Bellows maintained, “was at the disposal of President Roosevelt and his administration, and they would permit no broadcast that did not have his approval.”