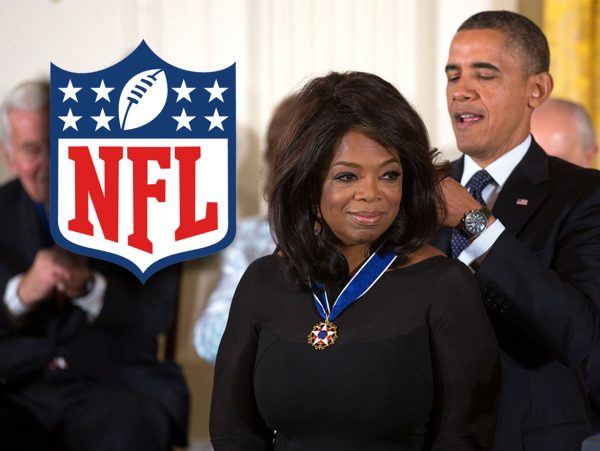 One day, Oprah Winfrey woke up, and her nationally syndicated show was plummeting in the ratings. Her audience had turned on her. It happened just days after what she thought was one of the best days in her life: the day she joined Maria Shriver and Barack Obama on the stage at Pauley Pavilion at UCLA to make her first big public appearance with the man the Queen of TV was hoping to help crown the King of the American political world.

Isn’t that how the mighty always fall? At precisely the moment they feel most invincible?

It all started innocently enough. In the fall of 2006, Winfrey appeared on CNN’s “Larry King Live” and was asked about a campaign a fan of hers had started to get her to run for president. Winfrey laughed off the idea, but she wasn’t finished. “Take all your energy, and put it in Barack Obama,” she advised the fan. She then explained Obama was her favorite senator and she hoped he would run for president.

Not long after that exchange, Winfrey interviewed Obama and his wife on her show to promote his book, “The Audacity of Hope.” The appearance propelled his “Audacity of Hope” to #1 on The New York Times and Amazon best-seller lists. On the show, she once again let Obama — and the world — know she was hoping he would run for president and that she would be behind him. She was also making it clear she hoped he would announce his run for the White House on her show.

Related: Irving Berlin: The Story of the Man Behind ‘God Bless America’ [1]

He chose to announce in Springfield, Illinois, instead — but Winfrey wasn’t finished throwing her reputation behind the fellow Chicagoan.

In May 2007, she once again appeared on “Larry King Live” and was asked if her endorsement of Obama still applied. “Of course,” Winfrey replied quickly.

Then came the next question from Larry King, a man not generally known for his sharp follow-ups. “Is there a side of you, the woman side, that would lean toward a Hillary?” he asked her.

It was the question on the minds of millions of Oprah Winfrey fans. “Well, I have great respect for Hillary Clinton,” Winfrey said. “I think I’ve said this before, and it’s true: Because I am for Barack does not mean I am against Hillary or anybody else.”

It didn’t take long for Winfrey to feel the backlash. Her message board was soon overwhelmed with angry postings. Even the major media outlets couldn’t ignore the firestorm she had ignited by choosing one part of her identity over another. One ABC News headline said it all: “Women Angry Over Oprah-Obama Campaign.”

Here is how that story began:

The queen of daytime talk is facing heat from her largely female fans who have traditionally agreed with just about anything she has done — from the books she reads to the weight loss plans she tries. But Oprah’s endorsement of Obama is different from the typical seals of approval the host offers on her show, and as early as November 2007 commenters on her site’s message boards began unleashing criticism of her endorsement for the black candidate — Obama — rather than the female one — Hillary Clinton.

How did Oprah and her team not see this coming? Did they consider even for a moment all the trust she’d built up with all those American women over the years? And did they consider how this decision to enter the political forum for the first time in her life might play out? She’d never before jumped into the political realm and endorsed a candidate, so why do it now?

Related: A Tale of Two Cities: Charlottesville and Houston [3]

The ABC News piece then printed a few of the hundreds of thousands of posts by irate former Oprah fans.

Here is one from a woman who identified herself as Austaz68 in a message thread titled, “Oprah is a Traitor!!!”

I cannot believe that women all over this country are not up in arms over Oprah’s backing of Obama. For the first time in history we actually have a shot at putting a woman in the White House and Oprah backs the black MAN. She’s choosing her race over her gender — hypocrisy at its finest!! Oprah — you should be ashamed of yourself!!!!!

Why didn’t Team Oprah anticipate the avalanche of antipathy? I suspect they missed it not because they were incompetent, but because they all thought — and Oprah herself thought — she was bulletproof. They thought her fans would stick with her no matter what and that they’d get over her decision — or just grin and bear it.

That’s when you always get in trouble in business, when you start to believe you are more important than the people who keep you in business — your customers.

There were many more open threads on Oprah’s message board, like this one started by a woman who identified herself as wendykwrit:

You know, for so long I’ve felt a connection to Oprah and all that she’s done not only for women but the world in general. She was such an idol to me and I truly loved all that she stood for. Since she threw her support behind Barack Obama I felt like she let me down … I feel like I lost a friend who I thought identified with me and now I realize she’s something she’s not, and I refuse to even watch the show anymore.

And there it was. A healthy chunk of Winfrey’s audience was turned off, and they tuned out. They tuned out because she put herself — and her platform — above her audience. She lost over 10 percent of her viewers, and she knew her #1 status on television was about to end. The television host ended up pulling the plug on her show before the plug was pulled on her.

How could someone as savvy and as smart as Oprah Winfrey make such a grave miscalculation? It’s simple, actually. She thought she was big enough, smart enough, and rich enough to do whatever she felt like. She surrounded herself with people who thought just like her, creating a cocoon that insulated her from the opinions that mattered most: those of her viewers.

Related: You May Not Know His Name, but This Actor’s Work Was Unforgettable [4]

She and her people thought, mistakenly, that those fans were either too in love with her to care, or that they’d eventually get over it.

When you get as big as Winfrey got, you start to think you’re too big to fail. And when you are loved by the media the way she was loved, it only makes it easier to believe you can do no wrong — until it becomes impossible to hear the sound of the audience tuning out.

The NFL, all of the rich owners, and the athletes and commentators tied to this multi-billion dollar franchise, this quintessential American brand, should think long and hard about Oprah Winfrey as the next days, weeks and months unfold.

Millions of NFL fans are military members. Millions more have families that have served in the military. And then there are the tens of millions of fans — most of them from every political and social spectrum — who love their flag and nation anthem — and their country. The vast majority of the fans love the NFL precisely because it is one of the few places Americans can come together and leave their worries and differences behind them, and simply cheer on their teams.

If the players continue to exercise their free speech rights and take a knee during the national anthem, they should not be at all surprised when their fans exercise their rights, too — especially their God-given right to tune out.

By the time the players and owners figure out that their wealth, privilege and platform exist because of the fans, it may just be too late. They will have learned a lesson Oprah Winfrey had to learn the hard way: The game isn’t about them.

Without the fans, there is no NFL.