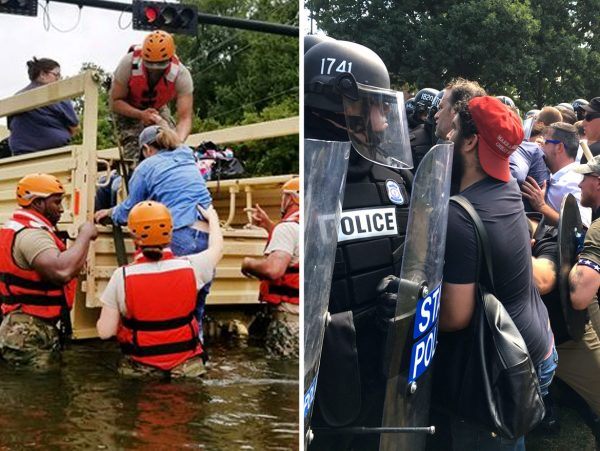 It’s a tale of two tragedies. One was man-made. The other was of the Old Testament variety — a flood straight out of the Book of Genesis.

One revealed the most extreme elements of our country — the other, its true character.

One revealed an America we don’t really know or like — the other, the America we know and love.

What we watched on our TV screens in Charlottesville, Virginia, a few weeks ago was the very worst of American life. But it had a feeling of Kabuki theater to anyone who knew what was really going on. Neo-Nazis and Klansmen got together in that beautiful town for one reason: to recruit more members to their evil tribe of racists and bigots.

The Ku Klux Klan was once a force in American life. Former U.S. Sen. Robert Byrd (D-W.V.) was once a member. So, too, was Supreme Court Justice Hugo Black, nominated by President Franklin D. Roosevelt to the nation’s highest court. At its peak in the 1920s, the Klan had a membership of 4 million.

That number is down to a mere 6,000-8,000 very bad, ignorant people. They are a dying breed. They’re not merely evil. Far worse for them, they’re irrelevant.

What that sad pack of racists and bigots were searching for was relevance. And attention. National media coverage, if possible. What they were hoping was that protesters would come out in force, and that some would be of the Antifa variety. They were hoping to be met not just with counterspeech, but with violence.

Antifa answered the call. The people of this group represent the most repressive strain of far left-wing activism. Some actually believe violence is permissible to silence speech they don’t like, which is not only un-American but something real-life fascists believe.

It’s why Antifa activists show up in what looks like riot gear. Because they’re looking to start one. When they show up, bad things often happen — whether Klansmen are present or not, as we witnessed at Berkeley last year.

Any adult with sense could see what was coming. Enter the mayor of Charlottesville, Mike Signer, who declared just days after the victory of President Donald Trump that his beautiful town, where I attended law school, would be “the capital of the resistance.” That must not have been good news to the good people of that city who voted for President Trump. To say his message was not a unifying one would be an understatement.

The activist mayor’s primary responsibility was making certain the rally the Klan was holding begin and end peacefully. As the weeks and months unfold, we’ll learn why the police stood down and watched people beat and club each other. We’ll learn why barriers weren’t erected that properly separated the two groups. What we will never learn is how a human being could bring himself to use his car as a weapon to kill an innocent bystander. That kind of evil is one we see radical Islamists perpetuating almost weekly in Europe with cars and trucks. We saw it a few months ago when a left-wing gunman shot and nearly killed Rep. Steve Scalise more than 100 miles north of Charlottesville [2].

We’ll never fully comprehend that kind of evil. But it knows no boundaries, not skin color, class, race, geography, or political orientation.

Those images we saw on TV had nothing to do with Charlottesville, or America. Those pictures had everything to do with one very small and evil group of Americans — the neo-Nazi, white supremacist crowd — in its death grip crying out for attention and a fight, and very small and ugly left-wing counter faction giving their enemies the very thing they so desperately craved.

It was the 1 percent of the 1 percent doing what they do. With the world watching and drawing all kinds of conclusions about America that are simply wrong.

And then came the pictures out of Houston. We saw story after story of Americans reaching out to help fellow Americans regardless of race, ethnicity, gender, sexual orientation or class.

Related: Trapped in Houston, They Did the Most Delicious Thing Ever [3]

One picture captured it all. It was a white man in a baseball cap and fatigues, the kind of guy that Ford would pick out of central casting for an F-150 commercial. He was knee-deep in water on Interstate 610 in the southwest part of Houston, his head down, carrying a woman he did not know to safety.

Her baby boy was swaddled in a blanket close to her chest, fast asleep.

She was of Asian descent. She appeared to be in her 30s. The look on her face was one of relief and exhaustion. Relief that she’d been rescued by this stranger — exhaustion because she, too, was carrying someone. Her baby boy was swaddled in a blanket close to her chest, fast asleep. Unaware of the world around him. Protected from the world around him.

The man’s name, we soon learned, was Daryl Hudeck, a Houston Police SWAT officer. The mother of 13-month-old Aiden Pham, the mother, Catherine, had this to say on Facebook hours later: “Our house is completely flooded, but at least we are all together. We are so thankful God was looking over us today.”

Then there was the story of an unusual band of water-based missionaries who call themselves the Cajun Navy. They’re an inchoate army of volunteers with fishing boats and other small recreational vehicles they own and use for pleasure, mostly. But they’ve also deployed their private armada for social good, providing lifesaving help during the days after Hurricane Katrina in New Orleans.

When the people of Houston heard the Cajun Navy was on the way, they were grateful — citizens and first responders alike. They are that good at what they do, these avid outdoorsmen.

Related: Why the Strength of Houston Is So Humbling [4]

“Spending hours in monsoon rains doesn’t bother them, because they know ducks don’t just show up on a plate, and they’ve learned what most of us haven’t, that dry comfort is not the only thing worth seeking,” Sally Jenkins wrote in a Washington Post column. “They have suspended their pursuit of bass and black crappies, blue gills and redfish, crawfish and panfish, to motor through subdivisions, shirtless in the rain. You can’t help but be struck by just how much they know how to do — and how much your citified self doesn’t.”

Many of them voted for President Donald Trump. Some did not. Many are members of the NRA. And many are Christians. Former President Obama described white rural outdoor types like them as “clinging to their guns and their religion.” They feared people who weren’t like them, Obama opined, in a grotesque caricature of upwards of 100 million citizens in this country, back in 2008.

Hillary Clinton described the very same people as a “basket of deplorables” in 2016 [5].

Most Americans know better. The ones who don’t know better got to see these outdoorsmen in action last week. Saving people who did not look like them without hesitation, and doing it on their own dime, their own time.

There would be no reimbursement requests to the government from the Cajun Navy. They simply did what they do — and do better on the water than most first responders.

Related: These Stars Have Inspired Us by Their Harvey Relief Efforts [6]

“They can handle their boats better than the average fireman, who handles a boat once a year during annual training,” Lt. General (ret.) Russel Honore told Jenkins. He estimated these men saved 10,000 from floodwaters in New Orleans while he was in command after Hurricane Katrina. Most of the people those white outdoorsmen in the Cajun Navy saved in New Orleans were black.

According to Honore, this volunteer group has become essential when tragedies like these strike. “The first responders aren’t big enough to do this,” he said. “You might have a police force of 3,000, and maybe 200 know how to handle a boat.”

Academy Award-winning director Allan Durand knows a lot about the Cajun Navy. He directed a documentary about their work. “These guys don’t care how hot you are or how bad you smell,” Durand told Jenkins. “These are people who spend 300 or 400 hours in the swamp every year, so being in a subdivision in Houston is not real scary to them. It’s just more water.”

Honore pointed out that most of the people saved in Harvey and Katrina were saved by neighbors and volunteers.  “You see them in sports boats and even kayaks saving lives — and it’s a beautiful thing to see,” Honore told Jenkins.

“That’s the spirit of this city, everybody is just helping everybody,” Houstonian Sarah Osborne told Yahoo News. “People just help each other. That doesn’t matter, the color of your skin, or where you’re from, or what your religion is, or whatever.”

Lisa Plack, a 54-year-old Texas native, was scrubbing metal dishes in a tub near wet chairs and sofas that were drying out on her lawn when a reporter approached her. “You hear nothing but bad press, you hear nothing but — you know — ‘This group hates this group,’ and then you find out: Nobody hates anybody. Everybody comes together.”

That’s the America we all know. A nation of people of every imaginable race, color and creed who live, for the most part, in peace and harmony. And in times of crisis, with compassion, selflessness and love.

Here’s hoping more people come to see that Houston and Charlottesville are not merely tales of two cities, but two narratives competing for the heart and soul of America. One insists America is a country filled with racists, bigots, homophobes, and white people angered that their majority status is slipping away. Then there’s what we all saw with our own eyes in Houston.

Here’s hoping the Houston narrative prevails, that the more beautiful America — the America we know and love — prevails.