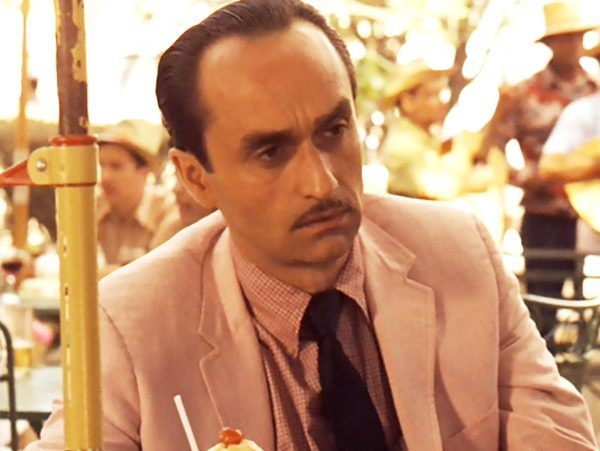 His short career as an actor was one of the most remarkable in film history. Ask actors about him — you’ll get an earful. Ask many people who watch lots of movies, and they probably won’t know his name — but they’ll know his face and the characters he brought to life so adeptly on the big screen.

To call him an actor’s actor would be a mistake, because he made directors and writers look great, too. John Cazale was born on August 12, 1935, and would have been 85 today if bone cancer hadn’t taken him from this world far too early in 1978, at the age of 42.

Few actors ever get to work on the set of one movie that earns a Best Picture Academy Award nomination, yet Cazale worked on five. More remarkably, he only acted in five movies in his career as an actor. You read that right. And all five were nominated for Best Picture.

Three of the five took home the Best Picture Oscar: “The Godfather,” “The Godfather: Part II,” and “The Deer Hunter.” The other two, “The Conversation” and “Dog Day Afternoon,” also got Academy Award nominations for Best Picture, but didn’t win.

Most notably, 14 of the performances by actors Cazale supported were nominated for Oscars. This is not a coincidence. He enriched every film in which he appeared and inspired every actor with whom he worked. “I think I learned more about acting from John than anybody,” Al Pacino once told an audience at the Actors Studio in New York.

The world got to know Cazale in his debut movie performance as Fredo Corleone in Francis Ford Coppola’s masterpiece, “The Godfather.” It may be as good a piece of acting as any ever seen in movies, as he inhabited the mercurial loser’s life to perfection.

From the moment he comes into view, Cazale commands the screen. In the midst of the noisy activity of the opening wedding celebration, Fredo approaches the table where his brother Michael (Pacino) and Kay (Diane Keaton) are sitting. When he appears, he is drunk. But Cazale was too fine an actor to play it straight. Instead, he played a drunk guy trying to act sober. He steps carefully and slowly, and puts his hand on Kay’s chair to steady himself; he kneels down in his tuxedo to get eye level with Michael and Kay.

The whole scene takes 21 seconds, but it gives us vital information: Fredo is a lover in a family of killers. With his inhibitions lowered by alcohol, he is sweet, affectionate, and soft-spoken. He is not looking for power and does not fit into this alpha machismo Italian male culture. Alfredo is looking for love and acceptance. But he’s in over his head. He’s lost. He manages to capture all of that in one short scene.

In another scene where Don Corleone (played by Marlon Brando) is shot in front of Fredo, Brando was reportedly so impressed with Cazale’s commitment to his role that he lay down in the street off-camera while John shot his close-ups — to afford him the greatest sense of reality in the moment.

It was Cazale’s work in “Godfather II” that truly showcased his talent, though. In the pivotal scene in the Lake Tahoe boat house, Fredo is lying back in a chair trying to explain to his brother why he betrayed his family. He was just trying to make some money and strike out on his own, he explained. Then came the rest of this remarkable scene.

FREDO: It ain’t the way I wanted it. I can handle things. I’m smart. Not like everybody says. Like dumb. I’m smart. And I want respect.

Fredo is simultaneously demanding respect and begging for his life, as his body quivers — and then spasms uncontrollably. The audience is moved to tears as the scene fades to silence. Because Fredo knows his life is over. So do we.

“He was such an imp and irresponsible,” the actor Phillip Seymour Hoffman said of Cazale’s portrayal of Fredo in a documentary about the actor in 2009. “He’s so desperate and anxious to get his piece of the pie and to be respected.”

Film historian Mark Harris explained that Cazale’s brilliance had a lot to do with his courage as an actor. “Weakness is something a lot of actors are afraid to play. They’ll play weak men but they’ll do it in a really sort of showy way to let you know that they’re not weak — that it’s a performance,” Harris explained. “And Cazale was so disinclined to do that.”

It was the climactic scene of what is perhaps the finest sequel ever made. And the above-the-title star didn’t steal the scene; the supporting actor did. That was Cazale’s true power as an actor: He didn’t need to gobble up a lot of screen real estate to make an impact.

Actor Sam Rockwell was similarly impressed by Cazale’s bravery. “You know it’s not easy to play weak. If you get the script for ‘The Godfather,’ every young actor’s gonna want to play Sonny or Michael. They’re not going to want to play Fredo,” Rockwell explained. “Cazale really let himself out there. He’s really vulnerable.”

No one, especially his family, could have predicted Cazale’s rise to acting legend status. He was born in Revere, Massachusetts, to an Irish-American mother and an Italian-American father. He caught the acting bug early and joined the drama club at Buxton High School in Williamstown, Massachusetts. He studied drama at Oberlin College and then transferred to Boston University, where he studied with Peter Kass and actress Olympia Dukakis.

In 1959, after some local theater work, Cazale made his way to New York City. He supported himself while looking for acting gigs.

His lucky break came not on the stage, but while working as a messenger at Standard Oil. It was there he would meet Al Pacino, himself an underemployed actor looking to make his mark in New York theater.

“When I first saw John, I instantly thought he was so interesting,” said Pacino, as quoted by Entertainment Weekly. “Everybody was always around him because he had a very congenial way of expressing himself.”

“Everybody was always around him because he had a very congenial way of expressing himself.”

Then came the break that changed both of their lives. Pacino and Cazale were cast in a play by Israel Horovits, “The Indian Wants the Bronx.” The play was first performed in Connecticut, and in 1968 they resurrected it in New York at the off-Broadway Astor Place Theatre. The rest was history. Both men won Obie Awards: Pacino for Best Actor, Cazale for Best Supporting Actor.

Cazale made his feature film debut in “The Godfather” alongside his pal Pacino in 1972. The film broke box-office records and made Pacino and Cazale overnight stars.

Director Francis Ford Coppola was so impressed with Cazale’s abilities that he wrote the part of Stan for him in his next movie, “The Conversation,” starring Gene Hackman.

Then, in 1975, Cazale and Pacino paired up again in the Sidney Lumet classic, “Dog Day Afternoon.”

“One of the things I loved about the casting of John Cazale was that he had a tremendous sadness about him,” Lumet explained. “I don’t know where it came from. I don’t believe in invading the privacy of the actors I work with, or getting into their heads. But, my God — it’s there — every shot of him.”

His performance impressed fans and actors alike. “From the moment you see him on screen in ‘Dog Day Afternoon,’ he’s just so strange looking,” actor Steve Buscemi once explained. “The really intense face and the receding hairline — the huge forehead and the long hair. I had never seen a character like that on film before.”

Film historian Mark Harris noted it was Cazale who was scary in this movie with Pacino. “He completely erases the dynamic he had with Pacino in the ‘Godfather’ movies,” Harris explained. “You don’t ever really believe that Pacino is going to kill someone. Cazale, you think might.”

“You believe he’s ready to kill somebody just out of fear,” actor Sam Harris said. “That intensity level is in his eyes throughout the entire film.”

Cazale made some compelling choices playing the part of Sal, and he took things in a direction opposite of most actors. Typically, the psychotic gunman starts out softly and builds to a climatic frenzy. Instead, Sal is commanding at the start, barking orders at people, dominating them. Then, as the situation grows more complicated, he retreats inside himself. The quieter Sal gets, the more dangerous he becomes — and the more we worry about the people in that bank, and Sal himself.

Although Cazale was now a famous film star, he continued to work in the theater. In the summer of 1976, he starred with Sam Waterston in the New York Shakespeare Festival’s performance of “Measure for Measure.” A 27-year-old blonde Yale Drama School graduate playing Isabella caught his eye. The actress was unknown at the time: Her name was Meryl Streep.

It was clear to everyone in the cast that Cazale and Streep had feelings for each other, and she soon moved into the 40-year-old actor’s apartment. Cazale proposed to Streep, and the two would have married but for his cancer diagnosis. When Cazale was ill, Streep put her career on hold to live with him in his hospital room in an effort to cheer him up.

Related: Incredible Story of a Hit Song: ‘Georgia on My Mind’ [4]

“I’ve hardly ever seen a person so devoted to someone who is falling away like John was,” said Al Pacino about Streep. “To see her in that act of love for this man was overwhelming.”

But they weren’t merely romantic partners. Cazale and Streep co-starred in the Vietnam War drama, “The Deer Hunter,” along with Robert DeNiro and Christopher Walken.

Because of his illness, the studio initially wanted to fire Cazale. But Streep and director Michael Cimino threatened to walk away from the picture if they did. He was also uninsurable, but De Niro paid for Cazale’s insurance because he wanted him in the film, according to Streep.

Cancer had so weakened Cazale that Cimino filmed all of his scenes before shooting any other part of the movie.

In March of 1978, Cazale died – with Streep by his side – shortly after completing his role in “The Deer Hunter.” He was just 42.

“There was something in his face that takes you into an area that’s very dark, personally dark — and heartbroken,” explained Sidney Lumet.

“His on-the-surface, low-octane effect made his performance searingly, soaringly passionate and human,” said Richard Walters, chairman of UCLA’s screenwriting department. “As Keith Richards once said, ‘The real music is in the silences.’ Cazale understood this better than almost anyone.”

In his eulogy in the Village Voice on March 27, 1978, playwright Israel Horovitz wrote beautifully about his friend and collaborator. This is what he said:

John Cazale happens once in a lifetime. He was an invention, a small perfection. It is no wonder his friends feel such anger upon waking from their sleep to discover that Cazale sleeps on with kings and counselors, with Booth and Kean, with Jimmy Dean, with Bernhardt, Guitry, and Duse, with Stanislavsky, with Groucho, Benny, and Allen. He will make fast friends in his new place. He is easy to love.