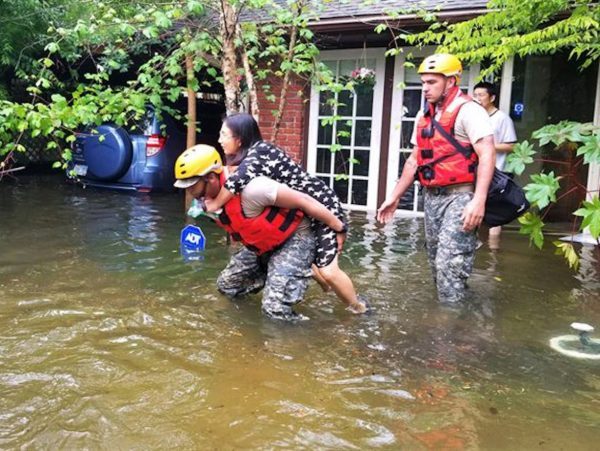 The 2016 presidential race was one of the most hotly contested political races in history. Both candidates were polarizing, and both Hillary Clinton and Donald Trump enjoyed ardent supporters and faced many doubters.

Voting is a near-sacred right, and democracy is one of America’s principal ideals. Yet over the weekend, a University of Tampa professor tweeted that Texans “deserved” to be struck by Hurricane Harvey because they voted for President Donald Trump.

Someone actually wished death and harm upon millions of people over voting preferences.

Wishing death and injury upon a whole state because its voters don’t agree with you politically is abhorrent. At least 14 people have died as a result of the hurricane, and as the waters recede, the death toll is likely to rise. Thousands are now homeless, and the total damage is likely to rise into the billions of dollars, with taxpayers on the hook for much of it. I can’t imagine any situation in which I’d wish such tragedies upon any group of people.

Yet the university professor apparently felt that the hurricane was an appropriate “punishment” for people who didn’t vote the way he wanted them to. People would learn that the GOP doesn’t care for them.

Make no mistake, I generally support left-leaning politicians. I am among the millions of Americans who didn’t vote for President Trump. But I would never, ever wish a hurricane upon a city full of voters who didn’t vote for my candidate. I wouldn’t wish such tragedy on any individual or family, and especially not over their voting preferences.

Related: Seven Quotes About Texas That Give Us Hope Post-Harvey [1]

I’m not going to release the professor’s name but will note that he was only a visiting professor. He was not part of the full-time, tenured staff. The University of Tampa also moved to immediately relieve the professor of his position. His classes will be covered by other staff.

While I am a strong proponent of free speech, I can’t say I am going to lose much sleep over his firing. Wishing harm upon millions of people is flat-out disgusting.

When it comes to natural disasters, we need to set aside our differences and come together. We need to focus on the innocent victims, many of whom are going to be children who didn’t vote and don’t really have a role in politics. After the waters have receded and the rubble has been cleared, we can debate the politics. We can argue who is responsible for what and who should have done what. But when people are directly in harm’s way, we need to focus on them first.

Political battles are going to heat up in the days ahead. Relief bills will likely be hotly debated. Policies, such as the National Flood Insurance Program, will be pulled right into the spotlight. Once the immediate emergencies have been addressed, I’m all for debating these policies. Until then, political aims should be minimized.

I can’t imagine any circumstance in which a good person would wish death and destruction upon the people of Texas. I hope the professor realizes this and is finding some remorse. So how about we come together, remember that we are all Americans and most importantly humans, and solve the challenges ahead of us.

Update: The professor deleted his tweet and apologized. The university issued a statement about its firing of the professor.

Brian Brinker is an OpsLens contributor and political consultant. He has an M.A in global affairs from American University. This OpsLens piece is used by permission.

Read more at OpsLens:
De-Policing Is Not Something Cops Do to Society, It’s Something Society Does to Cops
More People Buying Guns May Be Reason for Decline in Violence in U.S. [4]