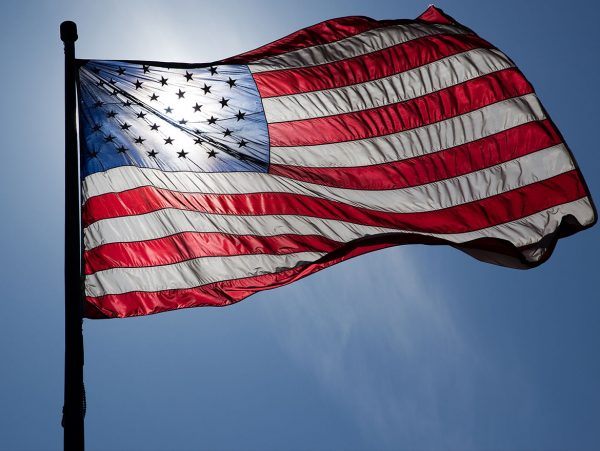 In a society based on free enterprise, open markets, and enough pizzeria competition to make Sicily’s mayor cringe, it may seem counterintuitive that a Connecticut-based marketing agency is declining clients who deny patriotism, public safety, and our armed forces.

As American as hot dogs, apple pie, Ford and Chevrolet, a patriot-proud merchant in Manchester, Connecticut, steps forward while candidly, politely and diplomatically invoking three principles as the spine of its mission statement: family, faith, forward-thinking:

Some may call it going out on a limb with potentially huge losses in commerce. Others may applaud the bravado and consume everything they market. In either case, CEO Kyle Reyes of The Silent Partner Marketing proclaims he does not want your business if you happen to withhold support for law enforcement officers, if you turn your cheek to our military members, or if you relish desecrating the American flag.

I don’t have information on his company’s numbers in terms of revenue and customer base, but I do know there are plenty of badge-holders, nation-preserving soldiers, and American patriots who’ll grab the flag-desecraters by the scruff.

As Reyes wrote in a NewBostonPost.com blog: “Yes, we are controversial. No, I don’t care that you have a problem with it. But perhaps you should ask yourself ‘why’ … instead of ‘what is this guy thinking?’ Whether it’s The Snowflake Test that prospective employees have to take, our sick-time policy that allows employees to trade sick days for guns, ammo, and shooting on the range, or our campaign to donate $500,000 in services to first responders and veterans — we have no problem putting it out there.”

Have you digested that? Curious? I am.

Reyes continues to qualify his mindset: “So naturally, I get the question all of the time: ‘What the hell is wrong with you and why would you risk putting your company out of business by getting controversial?'” I suspect his company’s financials are healthy, affording him the option to be conservative with clientele partnerships. Some are welcome; others are not.

Some notables (loosely termed) whose two cents are not welcome are Colin Kaepernick, Hillary Rodham Clinton, Barack Obama, Eric Holder, Marilyn Mosby, Black Lives Matter members, Shia Lebouf, Rep. Barbara Lee, and any of those pesky cop-blockers. I’m sure you can think of many more.

So what kind of customer base is welcome? Actor and philanthropist Gary Sinise [1], actor Denzel Washington, Pittsburgh Steelers quarterback Ben Roethlisberger, country music sensations Toby Keith and Tim McGraw, and an array of others to fill a book. Again, I’m sure you can think of many, too.

Related: A Cop Reveals His Pride and Prayers [2]

Anyone who adores what our nation’s flag stands for and heralds its history will receive open-armed marketers readily adaptive to patriotic commonality. Thus the groundwork is set.

Can they do that? Given the free enterprise principles we mentioned at the beginning of this piece, merchants generally have the right to decide with whom they wish to conduct business. Does that seem discriminatory? Perhaps to some folks it does.

As a policeman, I never felt good about brokering trespass warnings to homeless individuals hugging close to the front door of the 7-11 while its manager uttered the warning “Stay off the property!” But it was my duty. And I knew the merchant had the right to ensure clientele had unimpeded flow without a panhandler in the pathway. Does that sound harsh? Sure does. I detested such calls for service, but my duty-bound oath served as a reminder.

In parallel fashion, The Silent Partner Marketing is doing what it feels it has to do to adhere to its company values, including handpicking clients. Perhaps it feels duty-bound to our nation, doing its part to see our country’s warriors are safeguarded as much as possible.

What exactly does The Silent Partner Marketing agency do? It “handles the design and execution of your marketing strategy, your social media, videography and photography, graphic design, advertising, and more. Featured on “FOX & Friends,” The Silent Partner Marketing put together a heartfelt film depicting public safety factions in Manchester, Connecticut, and cast real-life police officers, firefighters, and EMS responders to portray the selflessness in these honorable professions. Essentially, it put its money where its mouth is, despite any potential backlash.

Related: Why Cops in Buffalo, New York, Must Hand Out Language Cards [4]

Civil Rights Act of 1964. According to attorney Jane Haskins elucidating a business’s right to refuse service, the federal Civil Rights Act prohibits “discrimination by privately owned places of public accommodation on the basis of race, color, religion, or national origin. Places of ‘public accommodation’ include hotels, restaurants, theaters, banks, health clubs, and stores. Nonprofit organizations such as churches are generally exempt from the law.”

Ms. Haskins clarifies: “No matter where you live, you cannot deny service to someone because of his or her race, color, religion, national origin, or disability.” That last part stems from the Americans with Disabilities Act (ADA), which prohibits discrimination based on a person’s physical/mental disability and holds to account any establishment refusing to serve anyone requiring special accommodations.

“In some states and cities, you cannot discriminate against people because of their sexual orientation. If there is no state, federal or local law prohibiting discrimination in public accommodations against a particular group of people, then you can legally refuse to serve that group of people,” Ms. Haskins stated. Therefore, it sounds like BLM associates, anti-military-action protesters, and deniers of the American flag are chucked from the patriotic team without legal recourse.

The word “private” looms large and is defined as “provided or owned by an individual or an independent, commercial company rather than by the government” and “belonging to or concerning an individual person, company, or interest” as well as “carried on by the individual independently of the usual institutions.”

According to the American Civil Liberties Union (ACLU), “Businesses do not have a license to discriminate.” The ACLU claims: “Once a business decides to advertise its services to the public at large, it gives up the prerogative to pick and choose which customers to serve — even when that commercial service involves some form of speech or expression.” That is an intriguing assertion from civil rights enthusiasts and, at the very least, worthy of consideration.

Related: ‘The Only Reason I’m Alive Today Is Because of World War II Vets’ [5]

I wonder, though, if the courts will support The Silent Partner’s business premise … or step in and mandate with whom they must conduct commerce. Some publicity-setting cases in this particular area have been mitigated by the courts lately, but those mostly stemmed from sexual orientation disagreements.

Reyes expounds, “Our team at The Silent Partner Marketing stands firmly behind the men and women of our country who protect and serve. We believe that the thin blue line they represent is what keeps law and order and protects our families, our businesses and our nation.”

“As our humble contribution to police departments, we are pledging to donate up to $500,000 worth of video production over the next year to help share their stories. As marketers, it’s the job of our team at The Silent Partner Marketing to tell the stories behind brands and people. We are blessed to be an extraordinarily successful agency … but with success comes responsibility. It’s our responsibility to stand behind those who keep us all safe and allow our businesses and our families to thrive.”

The Silent Partner speaks out on behalf of those who are unjustly beleaguered and for a homeland whose factions go against the grain and whose foreign invasion dismisses its constitution. An irony, for certain. A new business model? Depends on allegiances, I suppose? Where do you stand regarding this business plan? More specifically, with whom do you stand?

CEO Reyes acknowledges, “I understand that we’re leaving tremendous amounts of money on the table by turning off people who don’t support police and first responders. I get that we’ve lost tons of prospective business by people who would rather coddle snowflakes than make them actually work.” A man of mince-free words, Reyes speaks to the hearts of many Americans nauseated by eight years of cesspool stirring and resource-leeching “citizens.”

At a time of chronic episodes of fast-food chains’ employees and independent businesses blatantly refusing to serve cops, it is beyond reassuring for a business to boldly deny anti-police, anti-military, and unpatriotic snowflake zombies to be held at the perimeter. It’s a touché approach.

“For my honor, I will never betray my badge,” say Manchester public safety professionals in the PSA film financed, produced, and marketed by The Silent Partner. Sometimes silence is complemented by tangible actions accompanied by a purifier.

Stephen Owsinski is a retired law enforcement officer whose career included assignments in the Uniformed Patrol Division and Field Training Officer (FTO) unit. He is currently a senior OpsLens contributor, a researcher and a writer. This OpsLens article is used with permission.

Read more at OpsLens:
Respect the Rank [7]
Dereliction of Duty [8]