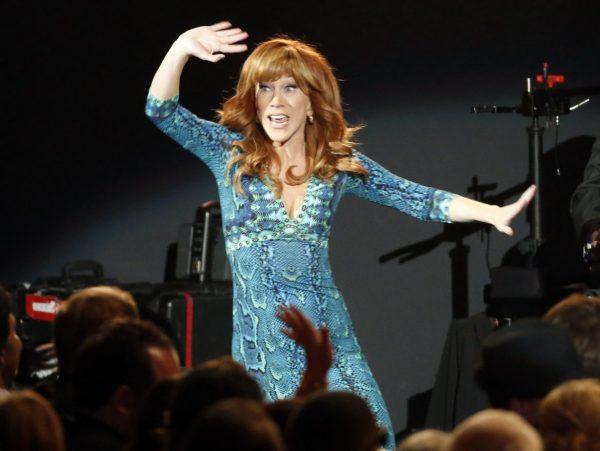 Celebrity comedian Kathy Griffin is trying to have it both ways. When a photo was leaked online in May that showed Griffin holding what was meant to be the severed head of the president, she received major backlash.

CNN dropped her as a New Year’s celebration host, and she was criticized by some who had worked with her in the past — people such as Anderson Cooper.

She held a teary-eyed press conference in which she apologized and said she went too far. This, despite the fact that Griffin could be spotted in a behind-the-scenes video from the now-infamous photo shoot, laughing and joking about how over the line she was going, even saying she and the photographer were “gonna have to move to Mexico” due to controversy.

She then played the victim card in her press conference — and gave an apology. She didn’t stand by the photo, and had it taken down.

Now Griffin is attempting a comeback — and she’s no longer sticking by her apology. “Why are people still expecting me to apologize and grovel to a man that tweets like this?” she said recently to The Cut magazine. “I’m a comedian; he’s our f***ing president.”

Griffin is reportedly planning a concert with the American Civil Liberties Union and looking to set up tour dates outside the United States, as she fears for her safety doing shows within the country.

Related: Kathy Griffin May Have Incited Violence Against the President [1]

Griffin is now defiant when people question whether her Trump photo went too far — something she already admitted in her press conference.

In a Monday interview with the Australian morning show “Sunrise,” Griffin told host Sam Armytage. “You’re full of crap” when someone commented that her picture was out of line.

“Stop this. You know this. Stop acting like my little picture is more important than talking about the actual atrocities that the president of the United States is committing,” Griffin said.

She continued, “No, I don’t apologize for that photo anymore, and I think the outrage is complete BS, because we have real things to deal with.”

“No, I don’t apologize for that photo anymore.”

When Armytage said the questions Griffin was being asked were fair, the comedian replied dismissively, “No, I got it. I got your number. You’re like a white Trump voter in America. I got your thing.”

Griffin is delusional if this is going to be her attitude going forward. She’s now putting on a show to capitalize on anti-Trump audiences — but they’d be suckers to buy into it, since everything she’s saying now is the opposite of what she said when she removed her photo and then apologized and asked for forgiveness over it.

She also seems to think that by comparing herself to the president, she can dismiss her own actions. No one has said the two people are on the same level. Of course a president’s deeds should be given more weight than a comedian’s — but the president has nothing to do with Griffin.

Griffin wants it both ways. She’s proven herself at this point in time to be an artist who simply can’t be trusted. She’ll apologize when the time seems right, whether she means it or not — and then she’ll lash out again when it seems to benefit her fading career.