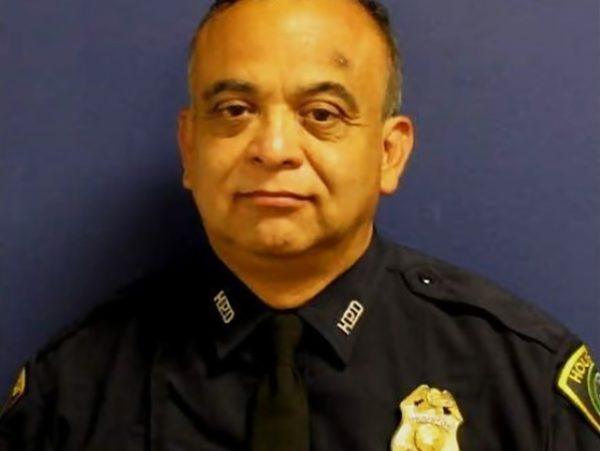 A Houston police officer has been confirmed dead after he drowned in floodwaters from Tropical Storm Harvey that left him trapped in his vehicle.

Sgt. Steve Perez, 60, died on Sunday morning during Harvey, Houston Mayor Sylvester Turner confirmed during a news conference Tuesday. Perez was heading to work when he was caught in floodwaters.

“He was trying different routes, and took a wrong turn,” one unidentified high-ranking official told the Houston Chronicle on Tuesday. Turner tweeted that Perez drove two-and-a-half hours ahead of work, looking for a safer route to report for duty.

Perez’s wife said the police sergeant told her, “I’ve got work to do,” when she asked him to reconsider going to work, Turner tweeted.

The officer’s death brought the number of people killed to 15 since the storm made landfall on Friday.

A family of six reportedly drowned Sunday afternoon while trying to escape floodwaters. The driver of the van, identified as Samuel Saldivar, escaped before the van was swept away.

Officials acknowledged the number of deaths from Harvey could soar once floodwaters start to recede in the sprawling city. Calls for rescue have also so overwhelmed emergency teams that they have had little time to search for bodies.

Related: Seven Quotes About Texas That Give Us Hope Post-Harvey [2]

More than 17,000 people have been seeking refuge at shelters as of Tuesday. The George R. Brown Convention Center exceeded its 5,000-person capacity Monday night, with hundreds more people pouring in.

Harvey produced a record 49 inches of rain since it came ashore, the National Weather Service announced on Tuesday. The storm threatened to bring more rain heading toward Louisiana through Thursday.

This Fox News [3] piece is used by permission; the Associated Press contributed.