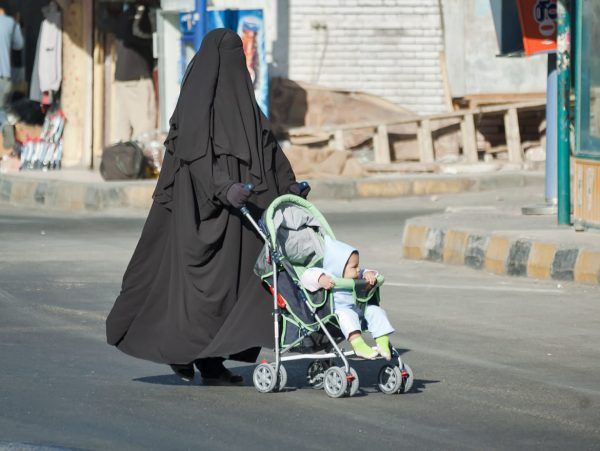 Placement into foster care is undoubtedly traumatic for any child. The separation of a child from his or her family — regardless of the circumstances or necessity — is stressful and wrought with emotion.

However, the placement of a five-year-old Caucasian and christened girl in Great Britain is stirring additional controversy, as she has been placed in a traditional, Arabic-speaking Muslim home.

The girl was placed with not one foster family but with two, both Muslim, by the Tower Hamlets borough council in London. She has been in foster care for the past six months. Reports say that both families adhere to Islam law, such as not eating bacon; and the females in the family cover their faces with Islamic veils. Sources say the girl in custody has been forced to remove her Christian cross pendant and was told that “Christmas and Easter are stupid” and that “European women are stupid and alcoholic.”

Tower Hamlets borough was caught up in election fraud and corruption, with former Mayor Lutfur Rahman accused of using “undue spiritual influence” to win votes. The children’s services were deemed inadequate by the Office for Standards in Education, Children’s Services and Skills. The population is only 31 percent white — but it is unusual for a white child to be placed in a minority home. There have been additional reports of bias against Christian families within the British Social Services foster system.

One has to wonder if there would be a worldwide outcry if the situation were reversed. What if an Arabic-speaking child who had been raised in a Muslim home were placed with a white, English-speaking family who adhered to traditional Christian practices? What if the child was served a ham dinner on Easter Sunday — and encouraged to sing “Jesus Loves Me”?

Christians, of course, are known to share their faith in an effort to convert others. Many Christian churches encourage families to foster and adopt as a way to share the love of Jesus. Jesus says in Mark 9:37, “Whoever receives one such child in My name receives Me, and whoever receives Me, receives not Me but him who sent Me.” This movement has provided a way for children without parents to find a forever family that can offer guidance and security.

That said, it can certainly be argued that the child’s foster home should not directly conflict with the child’s birth family and their belief systems. The transition from one home to another — sometimes multiple homes — can cause anxiety and feelings of instability. There would be no value in adding to those negative feelings by placing the child in a foreign environment. Were there no other foster families of a similar background available?

A friend of the young girl’s family in Tower Hamlets told The Times, “This is a five-year-old white girl. She was born in this country, speaks English as her first language, loves football, holds a British passport, and was christened in a church.”

It begs the question: Is this little girl being made an example of for political purposes — and are her needs and best interests being put aside for this reason?

Katie Nations, married for 15 years, is a working mother of three young children. She lives in Oklahoma City, Oklahoma.