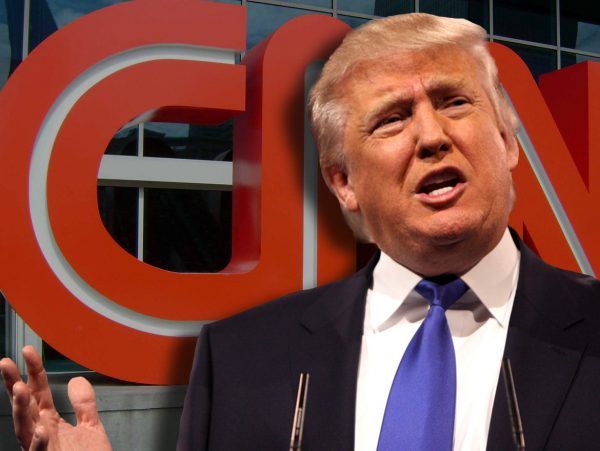 Politicians and pundits engaged in mass hysteria Sunday after President Donald Trump tweeted out a video depicting a mock WWE fight in which he body-slammed CNN.

In his tweet, Trump included the video along with two hashtags: “FraudNewsNetwork and #FNN. Many prominent figures on the left did not hesitate to interpret the 28-second mock video as a literal “incitement to violence” against media outlets that have been hostile to Trump’s presidency. Anti-Trumpers humorlessly claimed the video inspired Trump’s supporters to carry out acts of physical violence against members of the media.

“Donald Trump has had a series of highly disturbing tweets, but his last one, on Sunday morning, was beyond disturbing,” frequent anti-Trump critic Rep. Ted Lieu (D-Calif.) said Sunday on MSNBC. “We now have the president encouraging violence against the news media. He is increasing the risk that a journalist is going to get injured or get killed.”

The Reporters Committee for Freedom of the Press issued a statement on Trump’s tweet that claimed it “glorified physical violence against members of the press.”

“We condemn the president’s threat of physical violence against journalists. This tweet is beneath the office of the presidency. Sadly, it is not beneath this president,” Bruce Brown, the group’s executive director, said in the statement. “No one should be threatened with physical harm for doing their jobs. Journalists are your neighbors, they’re your friends. Journalists perform a critical function in our society, one the Founding Fathers felt was so necessary that they enshrined it first in the Bill of Rights.”

“They wrote that ‘Congress shall make no law respecting an establishment of religion, or prohibiting the free exercise thereof; or abridging the freedom of speech, or of the press; or the right of the people peaceably to assemble, and to petition the government for a redress of grievances,'” the statement continued. “Freedom of the press is a cornerstone of our democracy. The press are the people’s window into the halls of power, and most importantly, they are the people’s check on that power. When the president attacks the press, he attacks the people.”

House Minority Leader Nancy Pelosi tweeted, “Violence & violent imagery to bully the press must be rejected. This #July4th, celebrate freedom of the press, guardians to our democracy.”

CNN contributor and frequent Trump critic Ana Navarro claimed Sunday on the network that the president’s CNN tweet would lead to deaths.

“He is going to get somebody killed in the media. Maybe that will stop him,” Navarro said. “This is just going way too far. The president of the United States is inciting violence against the free press. In America, we cannot stand for it.”

CNN host Brian Stelter wondered Sunday on his show “Reliable Sources” if “this president [is] trying to impersonate Hugo Chavez? Recep Tayyip Erdoğan? Vladimir Putin? Because this is exactly the kind of language that leaders use when they are trying to undermine the press,” Stelter said, comparing Trump to the former leader of Venezuela and the current leaders of Turkey and Russia.

“Of course the American press is much more free than reporters in places like Russia and Turkey and Venezuela. And on this Independence Day weekend that is something we should all be celebrating,” Stelter continued.

Former “CBS Evening News” anchor Dan Rather said that he increasingly feels “the creep of dread and sadness” when Trump’s tweets target CNN and “fake news” outlets. (go to page 2 to continue reading)[lz_pagination]

(continued from previous page)
During a segment on CNN’s “Reliable Sources,” The Washington Post’s Carl Bernstein called Sunday’s tweet “an index of his state of mind,” adding, “It’s not just anti-CNN. It’s anti-freedom of the press.”

The Huffington Post even published an article called “Trump Marks Independence Day Weekend With Fantasy About Beating Up Journalists.”

Trump’s Sunday tweet capped a tumultuous week filled with spats against CNN and MSNBC hosts Joe Scarborough and Mika Brzezinski in particular.  But decrying the pushing of “fake news” biased stories, gloating over CNN’s forced retraction of a false story tying Trump adviser Anthony Scaramucci to a Russian investment fund, and now posting a mock video of a WWE scuffle have earned the president no love from the liberal media elite.

Much to CNN’s chagrin, Twitter ruled that Trump’s tweet did not violate the company’s rules against issuing violent threats. CNN noted that the company said it reviewed Trump’s tweet based on three factors: “the political context of the conversation surrounding the tweet, the various ways it could be interpreted, and the lack of details in the tweet itself.” And according to Twitter, Trump’s tweet failed to violate those standards.[lz_pagination]