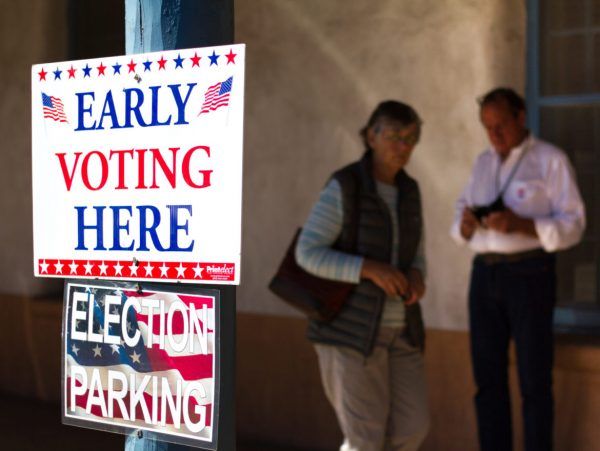 As Democrats and the mainstream media continue to insist that the president’s voter-fraud commission is a scheme to suppress votes, the head of elections in Broward County, Florida, is appearing in federal court in Miami as a defendant in a lawsuit where she will have to explain why Broward has more registered voters than citizens of voting age — a voter registration rate of 103 percent.

And she may also have to try to explain why Broward County, which has the highest number of Democratic voters in the state, has thousands of people over the age of 100 on its roll, and some as old as 130.

Logan Churchwell, the head researcher for the Public Interest Legal Foundation (PILF), which filed a suit against Broward County on behalf of the American Civil Rights Union (ACRU), told LifeZette on Tuesday that he counted “thousands” of centenarians on Broward’s voter roll in data the county submitted to the federal Election Assistance Commission following the 2014 election.

“It doesn’t necessarily mean they’re dead,” he said, “but if you’re 130 years old, either find a gravestone, or call Guinness!”

The case illustrates the very real problem with so many voter rolls in the country, where elected supervisors have often neglected, or even refused, to take steps to ensure that the roll is an accurate list of eligible registered voters.

On Tuesday, Churchwell was waiting to testify in the U.S. District Court for the Southern District of Florida in Miami about the failure of the Broward County supervisor of elections, Brenda Snipes, to maintain the county’s voter roll.

The roll, according to the ACRU, potentially includes tens of thousands of names of people who are ineligible to vote.

The suit is being brought on behalf of the ACRU and Broward County resident Andrea Bellitto, whose vote, along with the votes of all other citizens in Broward County, could be canceled out by those voting illegally.

The foundation used official U.S. Census numbers to determine the number of citizens of voting age in the county. The Census numbers have never been disputed by any court, says Churchwell, and in a similar case filed by PILF against Wake County, North Carolina, the defendant settled the case, agreeing to do more to check for and remove ineligible voters.

Last year, ACRU sent letters to the office of the Broward County Supervisor of Elections requesting specific information about how the voter roll was being maintained, and how many ineligible voters were being removed and how often. Under the National Voter Registration Act of 1993 (“Motor Voter”), those in charge of voter rolls are required to maintain the roll to ensure that it is an accurate list of eligible voters.

Brenda Snipes, the Broward County Supervisor of Elections, responded to the letters by saying it was “implausible” that there are ineligible voters on the roll, insisting that she was following the requirements of the law, without providing specific evidence.

“As soon as these jurisdictions get their back up and refuse to start answering questions, that’s when a lawsuit can start,” says Churchwell.

Snipes is a Democrat and former teacher who was appointed by then Gov. Jeb Bush in 2003 to serve as Broward’s elections chief. She has run every subsequent election, and has served as the supervisor of elections in Broward County continuously for the past 14 years. Snipes is the named defendant in the suit, but she is not alone.

After filing the suit, the local SEIU chapter representing health care workers in the county joined as an intervener, to defend against the charges and to prevent names from being removed from the Broward County voter roll. The group Demos, which has received hundreds of thousands of dollars in funding from George Soros’ Open Society Institute, is contributing to Snipes’ legal defense and working to prevent any and all names from being removed from Broward’s voter roll.

Snipes and SEUI filed a motion to dismiss earlier this summer to try to have the case thrown out, but the judge, Beth Bloom, denied their request. (go to page 2 to continue reading)[lz_pagination]

(continued from previous page)
In her decision, Bloom wrote that the voter registration rates in Broward County “at the very least create a reasonable inference that Snipes, despite all of the stated list maintenance efforts she has undertaken, has failed to meet the reasonableness requirement under subsection (a)(4) of Section 8,” referring to the section of the National Voter Registration Act (“Motor Voter” law) that requires a supervisor of elections to take steps to ensure the accuracy of the voter roll, including removing ineligible voters.

Ineligible voters would include:

In the motion to dismiss, attorneys for Snipes said that she follows state guidelines regarding the management of voter rolls, and regularly removes those voters that the state has confirmed are deceased.

But if it’s true that there are “thousands” of people on the list over the age of 100, it appears that either this is not being done, or that the state’s list of those who have died is not comprehensive.

And Snipes did not address what she is doing to ensure that all those on the voter roll are, in fact, citizens.

The state had initially identified 180,000 noncitizens with Florida driver’s licenses who were on the voter rolls in the state. It whittled that down and sent 259 names to Broward County, asking Snipes to send letters to these people, asking them to confirm whether they are citizens. After liberal groups complained, Snipes and others stopped the effort, and refused to remove from the county’s voter roll the more than 240 people who did not respond to the letter. (Seven had responded that they were citizens, and six were removed after responding that they were not.)

The trial continues Wednesday and Thursday in Miami, where Snipes is expected to take the stand.[lz_pagination]