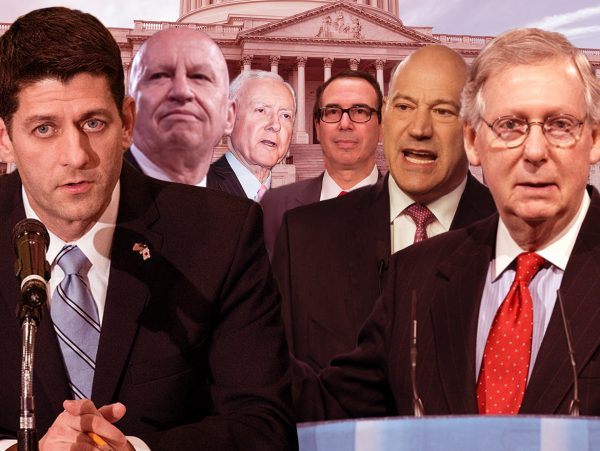 President Donald Trump and the Republican-controlled Congress have laudably made passing tax reform — real tax reform, not just shuffling money from one group to another — a top priority. Now, however, some supply-side economics skeptics are open to the possibility of taxing free speech — a constitutional right — to fill Washington’s coffers.

As you read this, the “Big Six” are meeting to discuss which deductions to keep or eliminate, and Ways and Means Committee Chair Kevin Brady must quell these whispers of taxing advertising. Imposing such a levy would trample on our country’s liberty and values, setting a dangerous precedent for further constitutional breaches in the foreseeable future.

As substantial “pay-fors” such as the border adjustment tax begin to fall out of the public’s favor, some in Congress have begun to look at provisions from Dave Camp’s 2014 tax reform proposal as a blueprint for replacement. Camp’s proposal would have changed the tax treatment of advertising from a normal, 100 percent deductible business expense to one that is only 50 percent deductible, with the rest being amortized over the course of a decade.

Self-proclaimed liberty-loving conservatives who are prepared to advocate for such a provision need to reflect on American history — after all, what did we fight the American Revolution over?

Perhaps the biggest boiling point for the then-British colonists was the Stamp Act of 1765, which imposed an advertising levy of two shillings for every ad, among other printed material, no matter its circulation or cost. The provision was wildly unpopular — so much so that the colonists engaged in mob violence to intimidate stamp-tax distributors into resigning, forcing the British Parliament to repeal it just a year later.

The principles and rallying cries that were brought on from the Stamp Act’s introduction led to the colonists’ rising in armed rebellion against their mother country a decade later.

The Continental Army won that war, and when they formed their new country they made sure to prevent the government from getting in the way of the freedom to advertise, as per the First Amendment: “Congress shall make no law respecting an establishment of religion, or prohibiting the free exercise thereof; or abridging the freedom of speech, or of the press.”

This is a law and precedent that has been abided by for centuries. Aside from some exceptions related to false and misleading content, the federal government has always respected the constitutional mandate to leave advertising alone. That’s why the Supreme Court case Valentine v. Chrestensen (1942) was overturned — the bench’s declaration that “the Constitution imposes no restraint on the government as to the regulation of ‘purely commercial advertising'” was 100 percent unconstitutional.

Now Congress wants to limit free speech by regulating the First Amendment — one of our country’s core founding principles — as an excuse to extort more wealth from American businesses’ pocketbooks? Camp’s 50-50 proposal would treat advertising like an asset, such as a machine, instead of like an expense, such as research and salaries — an unprecedented, unconstitutional move. (go to page 2 to continue reading)[lz_pagination]

(continued from previous page)
The First Amendment is supposed to apply to all Americans, not just those who can afford to pay a federal tax on it. Leading constitutional lawyer Bruce Fein made this clear in a recent Huffington Post article:

“Commercial speech is protected by the First Amendment. In overturning a prohibition on legal advertising in Bates v. State Bar of Arizona (1977), the Supreme Court reaffirmed that free speech includes paid advertisements or solicitations to pay or to contribute money. The court elaborated on the consumer benefits of commercial advertising:

“‘The listener’s interest is substantial: the consumer’s concern for the free flow of commercial speech often may be far keener than his concern for urgent political dialogue. Moreover, significant societal interests are served by such speech. Advertising, though entirely commercial, may often carry information of import to significant issues of the day. And commercial speech serves to inform the public of the availability, nature, and prices of products and services, and thus performs an indispensable role in the allocation of resources in a free-enterprise system. In short, such speech serves individual and societal interests in assuring informed and reliable decision-making.'”

The Civil War — a time of great revenue need — was the only time in American history that an advertising tax was put into place.

Today, we are not in the middle of a critical war, nor are we in a time of great revenue need. If Rep. Kevin Brady (R-Texas) and the rest of the Ways and Means Committee want to make sure that an unconstitutional can of worms — in effect, a constitutional loophole — is not opened, then they need to ensure that this anti-American provision does not make it anywhere near their final tax-reform proposal. Our forefathers risked their lives in the Revolution over 230 years ago to protect our God-given rights and liberty — let’s not throw them away so carelessly.

Edward Woodson is a lawyer and now host of the nationally syndicated “Edward Woodson Show,” which airs daily from 3 p.m. to 6 p.m. EST on gcnlive.com. [lz_pagination]