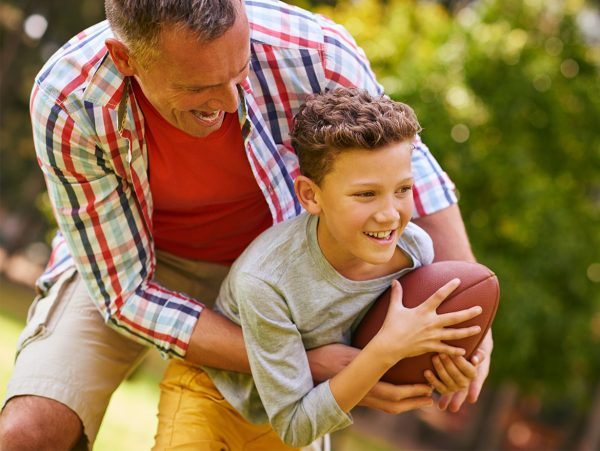 A new dad often feels he’s in competition with the kids for mom’s attention. As brood are added to the nest, that feeling often intensifies. For dads who share in child care responsibilities, a new study shows that a dad’s feelings about his relationship with his wife tends to be quite different.

Moms carry the heaviest share of the load when it comes to child care. The situation has improved compared to what it was 50 years ago. A recent survey by Pew Research Center reveals that today’s dads participate in child care more than dads did in the 1960s. In 2015, fathers helped moms with child care seven hours a week, compared to the 15-hour average load carried by moms.

Many dads recognize the disparity between the amount of child care they do, and what mom does. In the Pew survey, almost half the dads admitted they’re not doing enough. Counting the potential benefits to their kids, there are plenty of reasons to do more. Studies show kids stand to benefit from greater health, intelligence, and social adjustment, compared to their peers whose dads are not involved.

Adding to the reasons to get involved is research from Georgia State University in Atlanta showing that a dad who shares in his children’s care is also likely to benefit from a stronger bond to the mother of his children. These dads report a higher-quality relationship and more satisfying sex life with mom. The study was done by Daniel L. Carlson, assistant professor of sociology, and graduate students Andrea Fitzroy and Sarah Hanson.

The researchers reviewed data from 487 heterosexual couples with children and grouped them into three categories, relationships in which:

Looking at each couple’s relationship quality, the researchers concluded that when women were responsible for most or all of the child care, men and women reported lower-quality relationships and less satisfying sex lives, compared to couples that split child care responsibilities.

Perhaps the most surprising finding was that when dad took on most or all of the child care responsibilities, couples were just as satisfied with their relationship and reported having as much sex as couples who had split their child care arrangements.  However, these men were the least satisfied with the quality of their sex lives (perhaps they were too tired to keep up with their wives). (go to page 2 to continue reading) [lz_pagination]

(continued from previous page)
Based on the study, the ideal arrangement, producing the best combination of relationship and sexual satisfaction, is for parents to share child care responsibilities.

I recommend that husbands not wait for their wives to raise the subject of sharing child care responsibilities. The chances are she will not raise the issue until she is exasperated. At that point, husbands are more likely to become defensive or feel like a heel for not stepping in sooner.

Discuss your child care arrangements with your spouse. Many frustrations in relationships occur because wishes and needs aren’t expressed or heard. Look for a time that the two of you can talk and listen without distractions. For example, sit on the patio, take a walk together without the kids, or go on a date to a quiet restaurant.

Create an inventory of all of the household child care responsibilities and note which of you currently handles each one. This would be a good time for dads to give moms credit for all the work they do! The moms may think their husbands don’t have a clue — and if this is the case, humbly fess up to it.

Moms, if you want Dad to be more involved in child care, this is a good time to give dads credit for the work they do, as small as it may seem. A study at Ohio State University found that dads got more involved in the day-to-day care of a child when they received encouragement from moms.

Be sure to understand the difference between your own wishes and needs. Be able to express the difference. Share with each other your thoughts of what the ideal child care sharing arrangement might look like. Dad, let mom share first to avoid embarrassing yourself. Allow her ideas to influence your ideas of how an ideal sharing of child care responsibilities might look.

Agree on changes to the child care arrangement, and set a time a few months down the road to discuss how things are working. Dads, don’t expect moms to settle for an even split of the duties. Moms’ views on how much a dad should participate in child care vary.  Working toward an arrangement that satisfies both of you will benefit from efforts to understand each other’s wishes and needs. In the end, most dads should expect to walk away with greater responsibility.

A few months down the road, as you revisit your child care arrangements, make adjustments as needed to assure each other continued satisfaction. Adjustments will be needed as each child grows, and as your other responsibilities change.

Jon Beaty [4], counselor and father of two, lives near Portland, Oregon. He’s the author of the book “If You’re Not Growing, You’re Dying: 7 Habits for Thriving in Your Faith, Relationships and Work.” [lz_pagination]