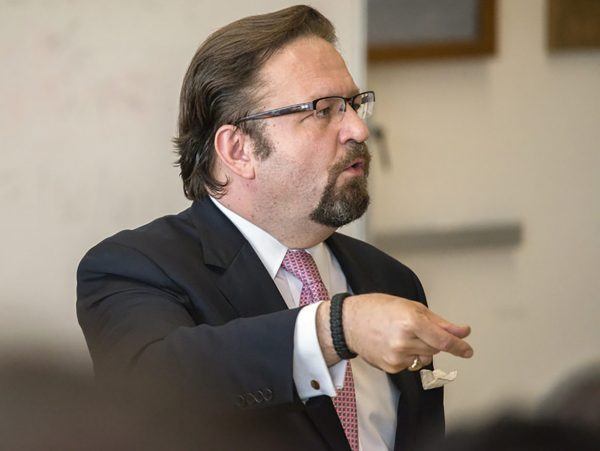 Deputy Assistant to the President Sebastian Gorka slammed CNN for its constant anti-Trump coverage during an interview on the network Tuesday morning, telling co-anchor Alisyn Camerota that “you aren’t in the news business anymore” though “you used to be.”

Gorka criticized CNN for continually pushing the unsubstantiated narrative that President Donald Trump or his associates may have colluded with the Russians to meddle in the 2016 U.S. presidential election. The Trump-Russia hysteria was rebooted over the weekend by a report in The New York Times that the president’s son, Donald Trump Jr., met in June 2016 with a Kremlin-connected lawyer who claimed to have damaging information against Clinton.

“It is very strange that CNN is obsessing on those who did nothing inappropriate and has nothing to say about people who are doing pay-for-play, who are involved in selling 20 percent of our uranium to Russia when their husband is getting a half-million-dollar speaking fee,” Gorka said, pointing to Clinton’s own involvement with foreign officials during the presidential campaign.

Camerota skirted the issue, countering instead with, “Is it possible that your team is obsessed with the Clintons?”

The deputy assistant replied, “No. We’d like you to actually do your job. You aren’t in the news business anymore. You used to be. You are in the attacking-President-Trump business. And it’s sad. It’s really sad.”

Gorka’s criticism came on the heels of several weeks of controversy for the network.

CNN retracted a fraudulent story linking Trump adviser Anthony Scaramucci to a Russian investment fund in June that culminated in the dismissal of three employees connected to the report. And after Trump tweeted a GIF of himself at a WWE match pummeling “CNN” to the ground on July 2, the network went through all the trouble of tracking down the anonymous Reddit user who reportedly created the GIF — to threaten to “dox” him, a term for leaking personal information with intent to harm.

CNN included the line in its follow-up story that it “reserves the right to publish his identity should any of that change,” referring to the possibility that the user might repeat such behavior, the hashtag #CNNBlackmail began trending and the network received bipartisan backlash.

In addition, a full week of CNN coverage claiming that Trump wouldn’t broach the topic of Russian meddling in the U.S. 2016 elections during his first sit-down meeting as president with Russian President Vladimir Putin on Friday was proven wrong when Trump did, in fact, press Putin on the topic.

After Gorka took a swipe at CNN for not being “in the news business anymore,” Camerota said, “It’s interesting. Look, I know you have to go, and I didn’t even want to go down this rabbit hole with you. When you take shots at us and at journalism, at CNN, I do feel —”

“Okay,” Camerota responded to the jab. “When you take shots at CNN, I do feel that I must respond and just point out that you called us yesterday to come on here. So why do you want to come on?”

“That’s what we do,” Gorka replied, adding that he wished personally to redress “the absolute absurd Alice in Wonderland of yesterday” when CNN anchor Chris Cuomo grilled White House counselor Kellyanne Conway Monday about the Trump Jr. report. Conway asked Cuomo if he was embarrassed that his network talked “more about Russia than America.”

“It was our decision that we should try and redress the balance, and you were very gracious to accept it. But if you don’t like the answers, that’s not my problem,” Gorka said.

Camerota insisted, “No, I’m looking for answers,” adding, “We appreciate you wanting to come on CNN. We appreciate having you on and talking about all of the things in the news.”

During the course of the tense interview, Gorka added in another zinger when he mocked CNN’s ratings.

“The amount of time you spend in desperation on a topic that has plummeted you to 13th place in viewership ranking across America, more people watch Nick at Night cartoons than CNN today,” Gorka taunted.

“If you want to go there, our ratings are doing just fine,” she repeated.

But Gorka continued to mock the network, saying that “Nick at Night is [in 11th place]” because “more people are interested in cartoons” than they are in watching the network Trump has dubbed to be filled with “fake news.”