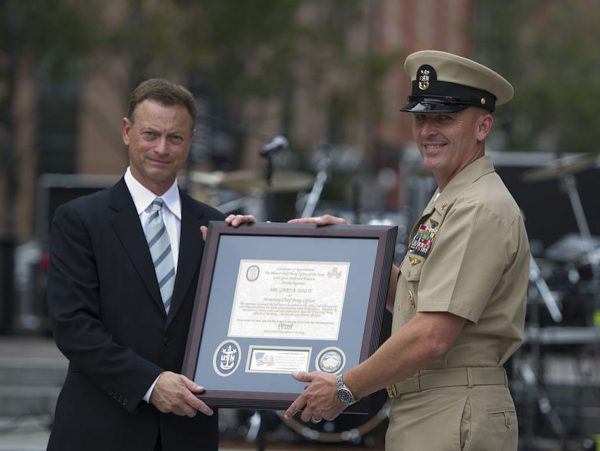 On the Friday after the Sept. 11 terrorist attacks, actor Gary Sinise felt a calling. Packed into a Los Angeles church with others looking for a sense of balance amid the chaos and loss on what then-President George W. Bush called a National Day of Prayer, Sinise was moved to action by words from the priest.

“Our priest was moving in his homily that day, talking about service and how service above self was very healing and that we all needed to try to do something to help our country heal … I heard that very specifically that Friday after September 11. That, I think, galvanized something in me, and I just felt called by God to do something to help heal the men and women who were deploying in response to that event,” Sinise recalled in a recent interview with Raymond Arroyo, host and managing editor of EWTN’s “The World Over.”

The actor best known for his roles in “Forrest Gump” and “CSI: NY” had already been involved in helping Vietnam veterans. He had learned through family members who had served during the conflict about the toll that came in returning home to a divided nation, one that had an aggressive and at times hostile attitude toward veterans. Sinise did not want to see history repeated.

“Once we started deploying to Iraq and Afghanistan and we started losing people, [and] they started getting hurt, I thought, ‘That’s where I can place my energy. That’s where I can serve.’ I’d been involved with Vietnam veterans. I don’t want our active-duty folks deploying to Iraq and Afghanistan and to come home to a nation that treated them the way our Vietnam veterans were treated,” the 62-year-old actor said.

It all led, in 2011, to the creation of the Gary Sinise Foundation, one of the most respected veteran charities around. Through the foundation, Sinise and others do everything from entertaining the troops (with the actor’s Lt. Dan Band, named after his iconic character from “Gump”), to building advanced homes for wounded veterans. (go to page 2 to continue reading) [lz_pagination]

(continued from previous page)
The specially adapted houses, part of the foundation’s R.I.S.E. Program (“restoring independence, supporting empowerment”), have become a large part of Sinise’s work and the foundation’s focus. The group’s website says 59 homes will be completed or be underway by the end of this year.

United States Army retired Staff Sergeant Christopher Walker will be enjoying one of those homes. Walker served as an explosive ordnance disposal (EOD) team leader in both Afghanistan and Iraq. While serving his second tour of duty in Khost Province, Afghanistan, in 2012, Walker was struck by an improvised explosive device (IED) and lost both his arms and his left leg. His next two years were spent in rehab at the Walter Reed National Military Medical Center in the Washington, D.C., area.

The Gary Sinise Foundation will be holding a dedication of Walker’s new specially adapted home on Friday, July 7, in Alexandria, Virginia.

“Once I started my foundation in 2011, we created a program to help build these homes, and that’s our R.I.S.E. program — restoring independence, supporting empowerment,” said Sinise about his group’s efforts to build homes that accommodate veterans’ injuries.

“They’ve [the wounded vets] had a lot of their independence taken away because they can’t do things for themselves, and when they’re living in a house that isn’t specifically designed to their needs, there are a lot of problems … We put all kinds of stuff in these houses to allow them to take care of themselves, so that their caregiver, if it’s their wife or their mom or their dad or whoever it is, can have a little more independence themselves.”

The world has watched as some people have used their fame [2] and success to push divisiveness [3] and self-indulgent political preaching [4]. But Gary Sinise, unlike so many others, remains a shining example of how an artist can use success for the greater good — to bring people together and to fight for positive change.

Said Sinise, a native of Illinois, about his journey to help veterans, which he partly credits to his Catholic faith: “I’m glad I’ve had the great success in the movie business that I had because it’s given me resources to do something positive that’s all part of the service aspect of what our faith teaches us.” [lz_pagination]