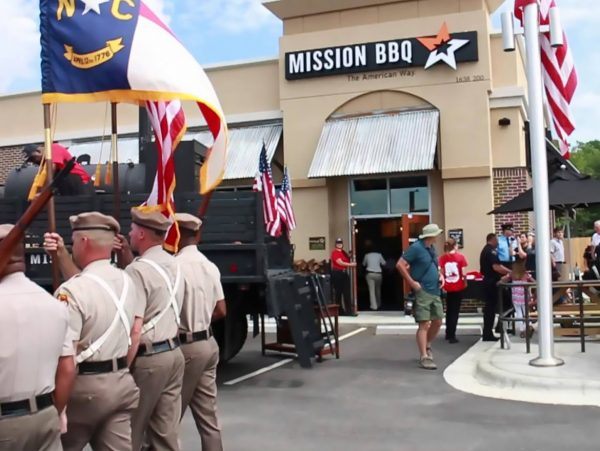 There’s plenty of great barbecue to be had across America — but some of the best is served up by folks who also served America.

Here are five of the best veteran-affiliated barbecue joints in the United States.

“In 2001, when 9/11 kicked off, a lot of soldiers were stranded on the side of the road at Fort Campbell [Kentucky]. It was a mess,” said Fox, who served overseas in Iraq, Afghanistan and Panama, among other stations. “Soldiers didn’t have anything to eat [1] and would run out of gas trying to get on and off post. So we opened up a grill and fed the soldiers.”

Fox’s food was such a hit that eventually Fort Campbell solicited the former soldier to open up shop on post. “We were at Campbell for four years, and the response was overwhelming,” Fox said. “We needed more space, so we finally moved to Clarksville. We’ve been growing ever since.”

“My passion for barbecue goes back to my grandma,” Fox explained. “When my grandma was home, I’d have to walk to the coal yard, and then I’d start the fire for my grandma. That’s how I learned different woods, like hickory and apple wood. From that, I learned to watch her and tried different things. She gave me her secret recipe when she passed away.”

Fox serves up full and half racks of ribs smoked over hickory wood (wet or dry), as well as brisket, pork, and smoked sausage with his special barbecue sauce. A favorite at the restaurant is the loaded fries, topped with chicken or pork and drizzled in cheese, and splashed with Fox’s special sauce.

2.) Swig and Swine. Anthony DiBernardo left the Navy in 1994 in Charleston, South Carolina, when the culinary scene was just starting to take off. “I was a cook on the U.S.S. Batfish SSN681 for four years,” Philadelphia-born DiBernardo told Fox News. “I love cooking, so I decided to stay in Charleston.”

After working at fine dining establishments around Charleston, DiBernardo opened his first restaurant, Swig and Swine, in Charleston, which today has two locations in the city.

“We’re one of the only places in South Carolina that cooks the whole pig, nose to tail, over wood,” he said. “It’s a dying art.”

At Swig and Swine, pitmasters roast the pigs over wood 24/7. “We man the smokers the whole time,” DiBernardo added. “It’s like being back on the submarine. There’s no downtime. And we make everything in-house, from pickles to pastries.”

This year, DiBernardo is planning on opening his third Swig and Swine location in Charleston.

3.) Q Barbeque. A Marine Corps veteran who served from 1982 to 1986 and a professionally trained chef, Tuffy Stone was looking for a challenge after the military. But he’s always had a real love for barbecue.

“Barbecue is the most gregarious, friendly food. It doesn’t discriminate. It’s relaxed and casual,” Stone explained to Fox News. “Historically, it’s for feeding large groups of people, such as family picnics at the park.”

In 2008, Stone and his wife, Leslie, opened Q Barbeque in Richmond, Virginia, and today own three additional Q Barbeques in the Richmond area.

What makes Stone’s barbecue special, Stone said, is a combination of putting the right amount of smoke on the meats with a rub that has a savory pop. “We’re very good at holding our meats hot, once they’re finished cooking, which is a challenge for barbecue restaurants,” he said. A sample of these meats include Stone’s brisket burnt ends, the spicy sausage, and the Memphis baby back ribs.

“My experience as a Marine helped me immensely,” Stone explained. “Attention to detail, hard work, the chain of command and leadership all come into play with running a restaurant. Early mornings and long days are the norm when cooking barbecue and serving as a Marine.”

Related: The Barbecue Joint That Honors Our Veterans [3]

In 2012, Stone went to Kuwait to cook for U.S. troops stationed overseas. “We fed more than 5,000 troops during the course of our visit, and many of the soldiers said that eating barbecue was the closest they had felt to home since they had been deployed.”

4.) Nordic Smoke BBQ. Kacy Tellesson served as an infantry machine gunner in the Marine Corps from 2005 to 2009. Four years later, Tellesson and his brother, Dusty, originally from Spangle, Washington, launched Nordic Smoke BBQ, a barbecue food truck and catering business out of Spokane. “We discovered we had a passion for it,” Tellesson told Fox News. “Our dad, Gary, always smoked meat, and that’s where I gained my base knowledge for how to manage a smoker.”

Tellesson says he was drawn to the mystery of figuring out how to cook different cuts of meat. (go to page 2 to continue reading) [lz_pagination]

(continued from previous page)
Out of all of the meats, brisket challenged Tellesson the most. “Brisket is a notoriously finicky cut of meat. Every weekend one summer, I would tweak the recipe, changing the injection, or changing the way I trimmed the brisket. I kept a notebook detailing my many failures, but with each botched brisket I got a little closer.” Today, Tellesson even specializes in a brisket that he says he’s “certainly not ashamed of.”

“It’s really the attention to detail that separates mediocre barbecue from celestial barbecue,” says the business owner. “The rub, the injection, the temperature, the type of wood, and the cooking time all create this symbiotic process that transforms a shoe-leather cut of meat, like a brisket, into something that can give a 4-star rib eye a run for its money.”

Nordic’s beef brisket, the most popular item, is injected with butter and beer before being rubbed down and smoked for fourteen hours. The ribs are cut in the St. Louis style, a trimmed-down version of the larger spare rib, and basted with butter and honey halfway through the five-hour smoking process.

5.) Mission BBQ. Best friends Bill Kraus and Steve Newton launched Mission BBQ on the 10-year anniversary of 9/11 with the goal of restoring the country to what it was before the attack — and building a business that reminded people of how fortunate they are to live in America.

With a love of barbecue and country, the men started their lofty endeavor in Glen Burnie, Maryland, and have since expanded to 50 locations in 11 states.

Related: Why This Proud American Wants Your Calls and Texts [1]

While Kraus and Newton are not veterans themselves, Kraus’ father, Al, and grandfather, Frank Shinners, served. Kraus’ son Alex is graduating from the U.S. Naval Academy, and his other son, Andrew, is in the Army.

Every day at noon, Mission BBQ employees stop cooking or taking orders in order to play the National Anthem.

Mission BBQ also donates $2 from each American Heroes Cup purchased to the organization featured on the cup, such as Wreathes Across America (to which they’ve given $228,664), Special Operations Warrior Foundation ($105,994), and the Semper Fi Fund ($61,618).

This Fox News [4] piece is used by permission. [lz_pagination]