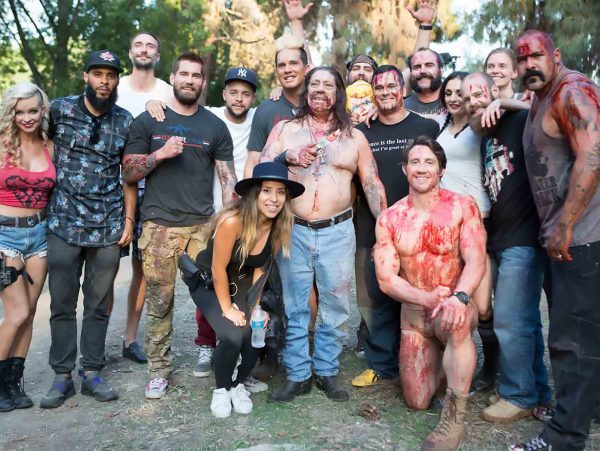 “Range 15” was a low-budget action movie released last year that has since gained a strong cult following. It’s a wild, ridiculous, and fun zombie adventure featuring a group of veterans who wake up, after a night of partying, to find the world is falling apart. It includes the participation of everyone from former Navy SEAL and “Lone Survivor” author Marcus Luttrell — to “Machete” and “Spy Kids” star Danny Trejo.

The film, however, is more than just an over-the-top zombie movie with a dark sense of humor. It’s a veteran-made project that faced and overcame major obstacles during its tight shoot. Eighty veterans got together to navigate the insane waters of Hollywood and the movie production world to create an action-based project that was fun and enjoyable — rather than the typical dour presentation of veterans and soldiers as broken or crazy.

“Not a War Story” is a documentary about the making of “Range 15.” It’s a feature-length movie that chronicles the ups and downs of the project and shows how veterans and veteran-supporting artists got together to make it in the first place. In essence, a B-movie about zombies wound up being so much more than just another Hollywood flick.

LifeZette spoke to producer Nick Palisciano for his fascinating take on the project, which premieres June 30 in California. In addition to his creative work on the documentary, he’s a former U.S. Army infantry officer and founder of RangerUp.com.

Question (LifeZette): Tell us how this project started in the first place — and how you got involved.
Answer (Nick Palisciano): Jarred Taylor and Vincent Vargas from Article 15, a competing clothing company that we [Ranger Up] have always had a great relationship with, had drafted a script with a writer. They came to me, gave me the initial script [for “Range 15”], and asked what I thought. At the time, I had no idea they wanted me to be involved. I really liked the script, and gave them a bunch of notes for things I would change and the things I thought were really strong.

Jarred and I had a long conversation about it, and then he asked me if I wanted to do it with them. I said yes. I’ve wanted to do a Hollywood film for a long time. I’ve written scripts. I’ve done documentaries. But I hadn’t jumped all the way in yet.

I felt like this was the right concept and the right guys to do it with, and I pushed all in and tried to take it to the next level. Jarred, Vince, and Mat Best put a lot of faith in me in bringing me on as a partner, and I did everything I could to be worthy of that trust.

Q: Why is “Not a War Story” more than just a “making of” or a “behind the scenes” movie?
A: It’s not about a movie. It’s about the military community coming together in a way that most of us haven’t done since we wore the uniform. We needed this project as a community. It was the impossible task. To go from no Hollywood experience and no money to raising $1.5 million and shooting a movie with William Shatner, Keith David, Sean Astin, Randy Couture, and Danny Trejo and then hitting the top of the charts on iTunes and Amazon — you either needed the military community or John Wick. John was unavailable.

“We needed this project as a community.”

In all seriousness, the execution of this movie required military precision and wherewithal. We didn’t know how to do it at the beginning, but none of us doubted we would do it. And so everything became an exercise in figuring out the next step and grinding on. And with every forward step we took, we had more and more people volunteering to help us succeed.

It started with six guys, and at the end we had Marcus Luttrell, Clint Romesha, and Leroy Petry. [Luttrell won the Navy Cross and Purple Heart for his actions in Afghanistan against the Taliban; the latter two won the Medal of Honor for their military work, also in Afghanistan.] Eighty other vets were on set, with thousands more supporting us from afar. Every time we slipped, someone rushed in to hold us up. It was amazing.

Related: Five Places That Should Give ‘Last Man Standing’ a Home [1]

We want people to see that. We want civilians to see that the community and the camaraderie make us a special group. We aren’t caricatures. We aren’t broken. We’re a cross-section of society that volunteered for a time to serve our nation, and we learned, more than anything else, how to support each other.

I think watching this documentary will be eye-opening for most people. (go to page 2 to continue reading)[lz_pagination]

(continued from previous page)
Q: There’s a very big gap, it seems today, between civilian and soldier. Do you think this movie will help in bridging that gap by showing these guys and gals joking around, enjoying the things everybody else enjoys, and so much more?
A: I hope so. I really do. The movie absolutely humanizes us. It’s impossible to not to watch it and not see normal people. You realize we could be your sons and daughters, neighbors, boyfriends, girlfriends. We aren’t robots. We aren’t angry. We’re normal people.

The most common thing we’ve heard from everyone we worked with — the crew, the press, etc. — is that they all expected us to be super-serious and when we weren’t, they almost didn’t know what to do with us for a while. Movies and the press condition people to think we are all victims of war. It’s patently false — and that stereotype probably does more disservice to us than any other.

Q: What would you like people to take away from this movie after they view it?
A: One: Their military is them. We are exactly like them. We just took a different path. Two: Anything is possible. This film should have failed. But through sheer force of will, teamwork, and an insane amount of work, it succeeded. All things worth doing are like that, and we want that for everyone. And three: Breaking the mold of convention is one of the most American things you can do.

We broke all the rules of film — how it was written, how it was funded, and how it was distributed, and it still worked. We forged a new path. You can, too.

Q: When can audiences expect to enjoy “Not a War Story” and should they watch “Range 15” before or after?
A: If you haven’t seen “Range 15,” I would actually wait until after at this point. You’ll appreciate it infinitely more after watching “Not a War Story.”

As for when “NAWS” will have wide distribution, I hope to be able to tell you that after the premiere.

“Not a War Story” premieres at the Samuel Goldwyn Theater in Beverly Hills, California, on June 30. “Range 15” is available now through digital video providers.[lz_pagination]