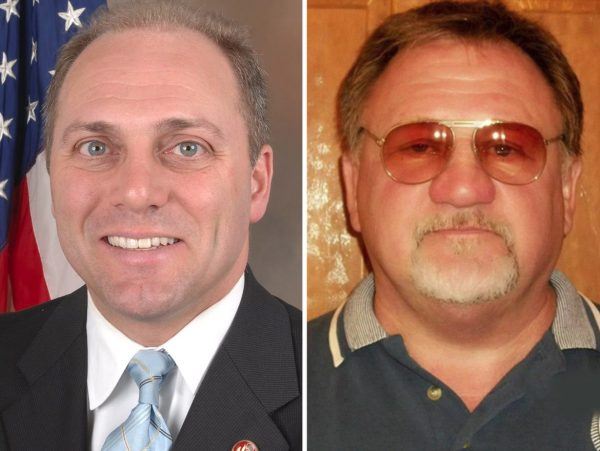 James T. Hodgkinson, the gunman suspected of ambushing Republican congressmen in Alexandria, Virginia, on Wednesday morning has been identified as a left-wing activist who volunteered on the presidential campaign of Sen. Bernie Sanders (I-Vt.).

According to one of his Facebook accounts — he appears to have at least two — the 66-year-old Hodgkinson is from Belleville, Illinois. The profile contains a “cover photo” depicting Bernie Sanders, for whom Hodgkinson campaigned, and his profile picture is an image that reads, “Democratic Socialism Explained in Three Words: We the People.”

“Trump is a Traitor. Trump Has Destroyed Our Democracy. It’s Time to Destroy Trump & Co,” Hodgkinson posted March 22 on Facebook.

The other account has a profile photo with an image of Bernie Sanders as Uncle Sam. The posts are recent and hysterical.

“Republicans Hate Women, Minorities, Working Class People, & Most All (99%) of the People of the Country,” he wrote on May 26. “Trump, the Climate Change Denier wants to Destroy the Planet,” he claimed on May 31. “Trump is the Worst President this country Has Ever Had, & He’s Getting Worse!” he tweeted on June 2.

“Founding Fathers Would Hate What Our Democracy Has Morphed Into. We Now Have an Aristocracy, a Corporatocracy, & an Oligarchy, & a Plutocracy. This Turns Our Country Into a Fascist State!” he wrote nonsensically on June 8.

On June 11, only three days ago, Hodgkinson shared a post from the AlterNet Facebook page which said “stop fighting over who created the world and fight against the people who are destroying it.” In light of Wednesday’s event the message is chilling.

Charles Orear, 50, a restaurant manager from St. Louis, said in an interview Wednesday with The Washington Post that he became friendly with James T. Hodgkinson, whom law enforcement officials identified as the shooter, as volunteers in Iowa for Sanders’ presidential campaign. Orear said Hodgkinson was a passionate progressive and showed no signs of violence or malice toward others.

“I met him on the Bernie trail in Iowa, worked with him in the Quad Cities area,” Orear told the Post.

Orear described Hodgkinson as a “quiet guy” who was “very mellow, very reserved.” The two men met while canvassing for Sanders. “He was this union tradesman, pretty stocky, and we stayed up talking politics,” Orear said. “He was more on the really progressive side of things.”

While it is unknown what exactly drove Hodgkinson to open fire on a group of Republican congressmen Wednesday morning, the hyperbolic anti-Republican rhetoric which Democrats and their liberal allies have employed freely in the wake of Donald Trump’s victory appears throughout his social media.

His “likes” on Facebook include “Last Week Tonight with John Oliver,” “Democracy Now!” “The Rachel Maddow Show,” and “Real Time With Bill Maher.” According to Rep. Jeff Duncan (R-S.C.), Hodgkinson approached him prior to the shooting and asked if the congressmen playing were Democrats or Republicans.

“I have just been informed that the alleged shooter at the Republican baseball practice is someone who apparently volunteered on my presidential campaign. I am sickened by this despicable act,” said Sanders in a prepared statement. “Let me be as clear as I can be. Violence of any kind is unacceptable in our society, and I condemn this action in the strongest possible terms.”