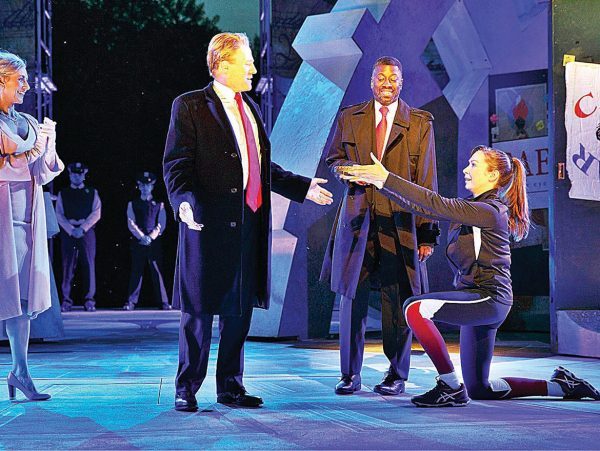 In New York City, more protesters attempted to shut down the staging of “Julius Caesar” by The Public Theater, in which Caesar is depicted as a modern-day President Trump look-alike [1], and his assassination is shown in gory, extended fashion.

After two activists rushed the stage Friday night — leading to the arrest of one of them — the trend continued as two more people did the same thing again afterward. As the Associated Press reported, video of the event shows 26-year-old Javanni Valle and 28-year-old Salvatore Cipolla storming the stage of the play and yelling, “Liberal hate kills!” and “Goebbels would be proud!”

There is no question a play depicting the death of the president in graphic fashion is not something that is culturally helpful in the wake of an assassination attempt on multiple Republican senators and congressmen.

Plays such as this controversial staging of “Julius Caesar” have fed into a widening cultural gap between conservatives and liberals that is concerning many.

Conservatives have thus far been split about protests against the play and what form fervently held beliefs should take. While nearly all of them have stood against the violence depicted onstage, some believed rushing a stage and attempting to shut down someone else’s free speech was not helpful.

Others, including conservative filmmaker Dinesh D’Souza, supported the protesters and their tactics.

Rushing the stage of a play and interrupting a performance is essentially the same as yelling “fire” in a theater. It’s not helpful at all.

That said, the staging of this “Caesar” play has been inappropriate. While the makers claimed the play advocates against violence, the gory death scene of a Trump-look-alike amid assassination attempts — as well as celebrities calling [2] for violence — has been toxic to the culture.

The website for “Julius Caesar” currently lists the last performance as this past Sunday, June 18. However, even with the play now closed, it is unlikely the debate between the Left and the Right about the tactics used to criticize the current administration will end anytime soon.