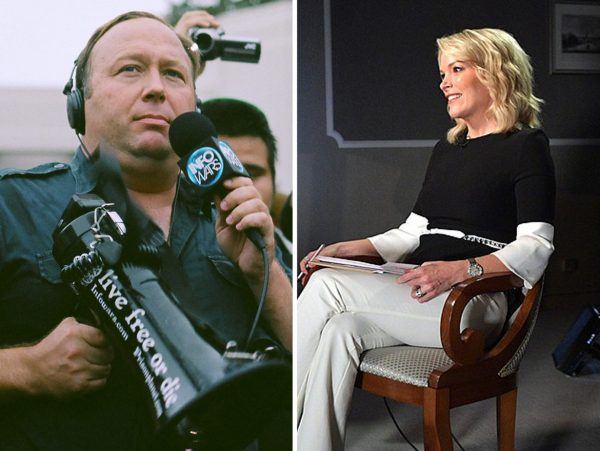 Controversial journalist Megyn Kelly has not had a stellar start at NBC News. The ratings for her new show have left much to be desired [1], and her interview with Russian President Vladimir Putin was far too softball [2] journalistically.

Not only that, previously unaired video from that Putin interview emerged this weekend showing the host completing the interview by flattering the Russian leader. Among other statements, she told him he had “brought dignity back to Russia” during his tenure as leader. The unedited video footage was obtained by HuffPost.

The next episode of “Sunday Night with Megyn Kelly” is built around an interview she did with Infowars founder and host Alex Jones, someone President Trump reportedly personally called and thanked after he won the 2016 presidential election.

A sponsor has already dropped Kelly’s show and the former Fox News host was disinvited from a charity event because of her interview with Jones, a man many in the media have said believes the Sandy Hook shootings in 2012 never happened — a position he denies having.

The promo for Sunday’s interview was what could be expected: Jones looked like a crazy conspiracy theorist in regard to the Sandy Hook tragedy. Kelly even fed into the hysterics about Jones being a Sandy Hook denier. She said in an official statement that his position was “revolting.”

Jones has now begun releasing audio of conversations between himself and Kelly to prove that she knew his true position on Sandy Hook — and that she sold her interview with him as something entirely different than what it ended up being. Thus far, one phone call has been released between the two, but Jones said he has the unedited interview taped — it was at least partly filmed at his studios in Austin, Texas — and that he will release it after Kelly’s interview drops on Sunday to prove how she spun and edited together Jones’ words.

It’s bad news for Kelly; her show has received almost no good press in its first few weeks on the air. Worse still, a report from The New York Post claims that sources say the episode is being reedited amid the controversy to make Kelly appear “tougher” on Jones. She also may be adding Sandy Hook victims’ families to the broadcast.

“I said Sandy Hook happened,” Jones revealed. “She wouldn’t even put it in the promo pieces.”

He continued before playing the audio for listeners: “In the past, MSM, corporate media could tell the truth, they could lie, they could spin. It was up to them. They were the gods of information.”

The phone call itself does not make Kelly look good. While it’s not uncommon for journalists to speak highly to potential interviewees to ease them into agreement, Kelly apparently sold the interview as something different than what reports and her own promo suggest it actually is.

“I’m not looking to portray you as some kind of bogeyman. The craziest thing of all would be if some people who have this insane version of you in their heads came away saying, ‘You know what? I see the dad in him. I see the guy who loves those kids and is more complex than we have been led to believe,’” Kelly said at one point.

She added about addressing controversies, “I’ll give you the chance to respond. I really just want to talk about you. You. Take the measure of the man. This is your chance to tell people who you are.” (click on page 2 for the rest of the story) [lz_pagination]

(continued from previous page)
The former Fox News host even told Jones she would “personally promise to look at any clips we want to use of you, and have a producer run by you, whether we are taking it in context, what you are saying.”

This is troubling not just because it’s coming from a journalist — but also because Jones has already claimed the promo clip edited him to make it seem as if he wasn’t fully answering questions.

The phone call also proves that Kelly’s public position of finding Jones’ Sandy Hook opinion “revolting” is just noise for the media and leftists upset at the interview. She hears Jones several times express an opinion on the phone different from the one she was so “revolted” by. “I believe people died there,” said Jones.

In response to those who say he thinks the shooting was a “hoax,” Jones said in the video released today, “She didn’t show in her promo video that I said I believe Sandy Hook happened.” He added he had “war-gamed” conspiracy theories that were already established — that were then attributed to him as full opinions.

“It’s not going to be some gotcha hit piece, I promise you that,” Kelly said at another point in the call. Worse still for her: Jones brought up another time he said he was deceptively edited by Kelly — a time she said was “completely unfamiliar to me.” Jones played footage of that as well.

While Kelly was still on the job at Fox News, she played audio of Jones saying, “When I think about all the children Hillary Clinton has personally murdered and chopped up and raped, I have zero fear standing up to her.” She stopped there. But in the video released today, Jones played the real audio, which continued with Jones saying he was referring to Clinton’s Middle East policies in Syria and Libya and the death of thousands of Christians there.

In the phone call, Kelly said multiple times she didn’t remember the edit.

“Despite Alex Jones’ efforts to distract from and ultimately prevent the airing of our report, we remain committed to giving viewers context and insight into a controversial and polarizing figure, how he relates to the president of the United States and influences others, and to getting this serious story right. Tune in Sunday,” wrote an NBC News spokesperson to The Hill in an email responding to Jones.

Jones has called for the interview to be pulled due to the edits; he also does not think the focus on Sandy Hook is appropriate for a Father’s Day airing.

NBC News has defended Kelly before. When Oliver Stone publicly jabbed at Kelly’s interview with Putin, saying she wasn’t prepared and didn’t know enough, NBC News President Noah Oppenheim, in mature fashion, then said in a public statement, “No one here is interested in Oliver Stone’s unsolicited thoughts on Megyn Kelly’s appearance or his ill-informed opinion of her journalism.”

He added, “But so long as we’re offering each other professional feedback, please let him know I don’t think he’s made a decent movie since the early ’90s.”

Stone’s interviews with Putin, which have just aired on Showtime, put Kelly’s interview with the same leader to shame [4].

With a flop of an interview with a world leader, bad press, weak ratings, and now Jones apparently in possession of a full, unedited interview — Kelly should seriously worry about the future of her show and its credibility with viewers.

This article has been updated. [lz_pagination]