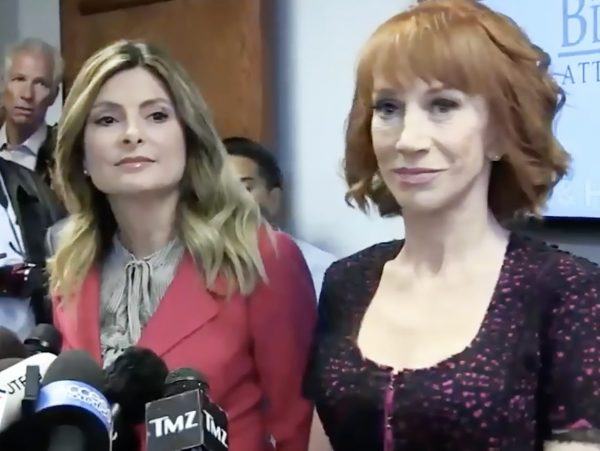 Comedian Kathy Griffin is confused and desperate. She is not funny. She is a hypocrite. She is delusional. It’s time for the world to move on while she tries to save what little remains of her very small career.

If a political science class wanted an example of fake news to dissect and examine — Griffin’s press conference on Friday morning would be prime material.

Griffin’s lawyer, Lisa Bloom, set a narrative that was simply a fairytale. It was one in which the Trump family bullied Griffin over a simple piece of art — a piece of “art” that even Griffin admitted in an earlier video went “too far.” She apologized then. So what happened?

Bloom claimed Griffin was speaking out for “vets,” “LGBT rights,” and “women’s rights.” What does any of that have to do with holding the likeness of the severed head of the president and causing outrage across the country?

“This is a woman thing,” a teary Griffin said, implying that a man who had done the same thing would not face the same professional consequences. She added she is an “easy target” for the president.

“This is a woman thing,” a teary Griffin said.

Griffin said she put about “five minutes” of  thought into the photo done by Tyler Shields, whose work the comedian referred to as “powerful.” She said the bloody head was a reference to the former feud between television host Megyn Kelly [2] and then-candidate Donald Trump. Griffin said the photo was “to give them something to talk about.” Only now that people are talking — well, Griffin wants to walk back on her motivations.

The press conference was completely politicized; it was a sad affair in which Bloom waved off the celebrity bullying of 11-year old Barron Trump, the youngest child of the president. She claimed Donald Trump Jr. bullied CNN into firing Griffin and was trying now to bully “Jeopardy” champion Ken Jennings out of a deal with his publishers. That’s not the truth [3]. Here’s the tweet Donald Trump Jr. spoke out about yesterday. He was mad that Jennings had cyberbullied his younger brother, as anybody understandably would be.

When Griffin spoke Friday, she painted herself as a victim of the administration. Bloom even brought up the imprisonment of the band P**** Riot in Russia by Vladimir Putin. Which artists has Trump imprisoned?

Stephen Colbert, Bill Maher, and many others continue to satirize the president without legal repercussions. The difference is that they don’t hold up what is supposed to be the severed head of the president. So thus far, Griffin has faced professional consequences that have nothing to do with Trump but with other people’s opinions of her actions. That’s called the free market. The Secret Service investigation the two referenced in the press conference over and over again is standard for anyone making threats against the president.

Griffin wasn’t making a joke. She admitted the video was supposed to make “noise.” She knew exactly what she was doing. And now she’s lost her job at CNN, a news organization with anchors who even called [4] the comedian out for her bad taste.

Put another way: If someone held up the likeness of your father’s or husband’s bloody severed head in a photo shoot, would that person then have the right to say you “bullied” them when you spoke up about it?

Kathy Griffin cannot have it both ways. In a behind-the-scenes video of her photoshoot with Tyler Shields, she said she and the photographer could handle whatever came of the “noise” they made — and she even joked they would need to run away to Mexico to avoid prison time.

She knew what she was doing. She knew she was intentionally crossing a line to get attention. Then, when she got the attention, she apologized because of the backlash — and now she’s basically reversing her position again.

Consider this tweet from the comedian in 2011. She tried to say that former governor Sarah Palin’s use of gun target imagery on her website incited violence against Gabrielle Giffords (D-Ariz.), who was shot in a horrendous act of violence in Arizona.

Based on her own thinking and definition, wouldn’t that mean Griffin thought she was going to incite violence against President Trump with her image? This is a woman who did what she did because the target was President Trump.

Many leftists felt she crossed the line, too. Griffin was stuck with no friends — and so she is now cowardly jumping from position to position in an attempt to find allies as the ship of her career slowly sinks like the Titanic.