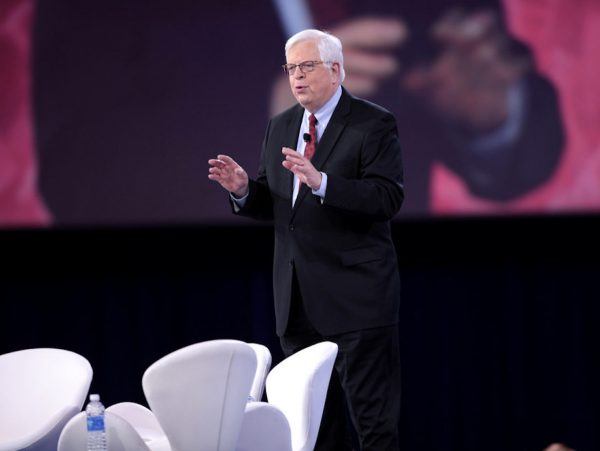 While grown adults sitting around scribbling in coloring books and blowing bubbles because they were offended by a sombrero or a certain someone getting elected to the Oval Office would seem to be prime-meat material for comedians, already coddled college students have been coddled some more by those comedians and the media that turn a blind eye to what’s happening.

That won’t be the case when “No Safe Spaces” is unleashed on the world. Starring podcast king Adam Carolla and popular radio host and author Dennis Prager, “No Safe Spaces” takes viewers into the belly of the beast. Carolla and Prager investigate firsthand what these safe spaces are all about and what the modern college student activist who marches against free speech and concepts such as cultural appropriation has to say for himself.

The movie has already drummed up controversy [1] from the duo’s college visits. It’s now part of an Indiegogo crowdfunding campaign through which people can order everything from the movie itself to their very own “No Safe Spaces” coloring book.

LifeZette talked to Dennis Prager about the movie, the state of the modern college campus — and whether things are going to get better or much worse.

Question: What kind of resistance have you faced with this movie, especially going to campuses that promote concepts like safe spaces?
Answer: Adam and I have spent years of our lives speaking to college students on campuses across the country. We have now done a few live events at places like Cal State Northridge — the audio of which went to #1 on the iTunes Comedy charts earlier this year — in the course of starting to make this film, but the big thrust of on-campus filming and interactions will take place this fall.

Right now we are crowdfunding $500,000 to help make the rest of the film. But we have met the expected pushback from left-leaning websites and organizations. The typical charges of “chauvinism” and “old white guys” have been levied, but we are undeterred, and the overall response has been incredibly positive and encouraging.

Q: Why do you think the media and comedians are so protective of college students today? It’s hard to ignore marches and protests against free speech, but much of the media manage to do it. Why?
A: The simple answer is that the Left lives in a bubble. To be an entertainer, on the whole, is to reside in a tone-deaf echo chamber. They read the same writers. They hold the same opinions. They don’t know any conservatives or libertarians. But beyond that obvious point, I would add that there are many liberal voices in the comedy world who have spoken out against the unchecked political correctness on university campuses. Bill Maher. Jerry Seinfeld. Chris Rock. These comedians will no longer perform comedy in front of college students. That is stunning and deserves to be highlighted — and will be in our film!

Q: There’s no doubt many colleges are not preparing young people for the real world. Yelling about things like cultural appropriation will not get people anywhere in life. Do you see this as a passing phenomenon? Will kids leave these campuses and suddenly wake up, or is this a path we are headed down and should be very worried about?
A: Societies and cultures do not remain static — they are either getting better or worse. I’m an optimistic person, by nature, but the current lackluster trajectory of higher education in America is depressing. Students dictate their childish whims to their professors and school administrators. Students and their parents are going into great debt to obtain a largely worthless degree in things like gender studies. This is why I started Prager University. This is why I am making this film with my friend, Adam Carolla. I want to put a spotlight on the problems we face and offer solutions going forward.

Related: Even Liberals Can’t Discuss Their Films on Campus [4]

Q: What makes Dennis Prager and Adam Carolla such a perfect team for a project like this?
A: I am genuinely flattered that someone as funny and talented as Adam Carolla undeniably would want to partner with me on projects like this one. Adam and I are from entirely different backgrounds and generations [Prager, from Brooklyn, New York, is 68; Carolla, from Los Angeles, is 53]. But we both love people and both love ideas. Adam brings something to the table that is missing far too often from the exploration of serious subjects: levity.