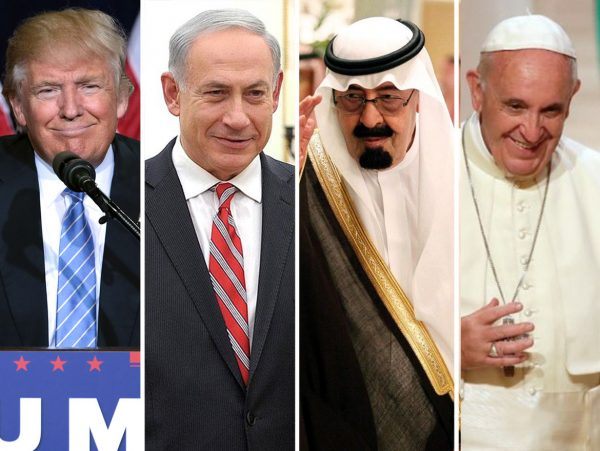 President Donald Trump will make the first foreign trip of his presidency to Saudi Arabia, Israel, and the Vatican [1] ahead of a North Atlantic Treaty Organization summit on May 25, in what aides characterized as a restoration of “strategic confidence.”

Trump said during a ceremony commemorating the National Day of Prayer on Thursday that he has high hopes for the trip.

“We will begin to construct a new foundation of cooperation and support with our Muslim allies to combat extremism, terrorism and violence.”

“It will be with leaders from all across the Muslim world. Saudi Arabia is the custodian of the two holiest sites of Islam,” he said. “And it is there that we will begin to construct a new foundation of cooperation and support with our Muslim allies to combat extremism, terrorism and violence and to embrace a more just and hopeful future for young Muslims in their countries.”

It is a statement that likely is jarring to critics who accuse him of anti-Muslim animus. But the president said his goal is to build consensus on shared goals in the Middle East, not to bark orders at foreign governments.

“Our task is not to dictate to others how to live but to build a coalition of friends and partners who share the gaol of fighting terror and bring safety, opportunity and stability to the war-ravaged Middle East,” he said.

“Obviously, this has to be seen in contrast to President Obama’s outreach to Iran,” he said.

Shideler said Israel and Saudi Arabia have plenty of differences. But he added that they are the countries with the most at risk from an aggressive, expansionist Iran. He said Trump would be wise to keep the focus on Iran and downplay the Israeli-Palestinian dispute, which the president has shown an interest in trying to solve.

“You risk emphasizing differences over similarities [between Israel and Saudi Arabia],” Shideler said.

Senior administration aides, speaking on condition of anonymity, told reporters Thursday there is a great opportunity for common ground.

“What this trip will also do is it will reverse what had been a trend, I think, of America’s disengagement from the world and some of its biggest problems,” one said, adding that attitude has “aided and abetted those who were really fomenting violence and perpetuating human suffering.”

The aide said the trip also will show that Trump’s “America First” foreign policy does not mean the country will abandon thorny problems around the world.

“What the president has demonstrated already and will be able to demonstrate even further on this trip is that ‘America First’ is fully compatible with American leadership in the world,” he said.

The aide said Trump already has won concessions from NATO allies to increase defense spending to better share the responsibilities of the alliance.

“Contrary to I think what has really been the conventional wisdom associated with the president’s approach to alliances, the president actually done a tremendous amount of work to strengthen alliances,” he said.

Another adviser said the trip is designed come up with a framework for a long-term fix for radicalization in the region, to stop funding for terrorist organizations, increase burden-sharing in the fight against terror, and develop new strategies to counter the Islamic State terrorism group and Iran.

“This whole conversation started with the Saudis shortly after the election,” he said. “They approached us wanting to start a new relationship with America. I think there’s a lot of opportunities because of people excited to deal with the president.”

“It was very interesting to see the eagerness to work very closely with the United States and coalition partners, on really something they uniquely have an interest in, which is the radical ideology that is spreading, ” she said. “And it felt, to me, a little bit like after 9/11.”