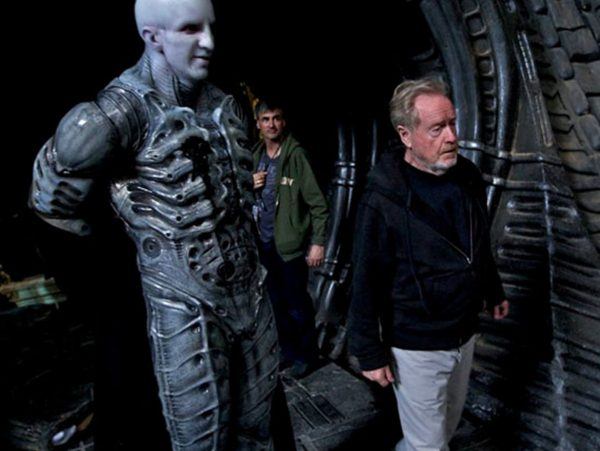 There’s little doubt Ridley Scott (shown in the images at the top of this article) is one of the greatest directors to ever live. His directorial eye has given the world “Alien,” “Thelma & Louise,” “Blade Runner,” “Black Hawk Down,” and “Gladiator.”

Now he’s returning to the world of science fiction horror with “Alien: Covenant.” The sequel, dropping in theaters on May 19, is technically his second attempt at a prequel to his 1979 masterpiece “Alien.” The first was 2012’s “Prometheus,” which deeply split audiences and critics.

Scott now admits his film didn’t live up to the hype around it and that “Alien: Covenant” was a bit of a course correction in giving the people what they wanted.

“We discovered from it that [the fans] were really frustrated. They wanted to see more of the original [monster] and I thought he was definitely cooked, with an orange in his mouth. So I thought: ‘Wow, OK, I’m wrong. The fans, in a funny kind of way — they’re not the final word — but they are the reflection of your doubts about something, and then you realize, I was wrong or I was right.’ I think that’s where it comes in. I think you’re not sensible if you don’t actually take [the fans’ reaction] into account,” Scott told Yahoo in a recent interview.

While his words are a mild admission to not having lived up to audience expectations, this tale brings up a larger issue: that of filmmakers apologizing for subpar work after the fact. It would all be fine and dandy if they didn’t put on a dog-and-pony show for the press and promote something they know deep down is just no good. People end up spending $10, the directors or producers laugh it off on a late-night TV show — and the consumer is still out $10.

It happens more often than we think. At least Scott sticks by his idea. These three other filmmakers’ comments suggest they knew their movies were wrong all along.

Josh Trank, “Fantastic Four” (2015). The latest reboot of the “Fantastic Four” franchise was such a pure example of a disaster that it was almost sad to watch it crash and burn the second a few eyeballs caught it in theaters.

Though there were high expectations going into the film, thanks to director Trank’s highly praised debut movie, “Chronicle,” audiences and critics quickly agreed that what was onscreen was a mess and barely qualified as a movie.

Related: Was Conservative ‘Last Man Standing’ Canceled Because of Politics? [2]

Press quickly turned to investigative reporting as people tried to dissect what went wrong. Rumors were ripe for the picking — everything from a director who refused to communicate with his cast to costly reshoots.

While Trank was out riding high on positive press way before the film’s release, talking the whole endeavor up to fellow filmmakers such as Kevin Smith, the second things turned sour he seemed to admit it was all an act — and that he knew the final product was not worth people’s time or money.

On the eve of the movie’s release, Trank took to Twitter and wrote: “A year ago I had a fantastic version of this. And it would’ve received great reviews. You’ll probably never see it. That’s reality, though.” The tweet confirmed everything people had suspected: that Trank had simply been putting on a confident front about his terrible movie.

Steven Spielberg, “Indiana Jones and the Kingdom of the Crystal Skull” (2008). When you’ve made everything from “Jaws” to “Jurassic Park,” it doesn’t really matter at this point what you put out.

Spielberg’s latest installment in the “Indiana Jones” franchise may have been financially successful, but it’s often mocked and maligned by fans for a terrible plot line and a bizarre ending involving aliens.

The director later admitted disappointment with the movie that started with the very script he was shooting, which had a story concocted by friend and fellow filmmaker George Lucas. Spielberg told Empire that the McGuffin (or placeholder storyline that works as a platform to see Indiana Jones again) didn’t work and never had a chance of working.

“I sympathize with people who didn’t like the McGuffin because I never liked the McGuffin. George and I had big arguments about the McGuffin. I didn’t want these things to be either aliens or inter-dimensional beings. But I am loyal to my best friend,” the director said.

One of the most mocked segments of the movie occurs when Indiana Jones survives a nuclear blast by hiding in a refrigerator. Spielberg at least took responsibility for that “jumping the shark” moment: “That was my silly idea.”

Josh Brolin, “Jonah Hex” (2010). It’s not always directors who apologize for their films; sometimes it’s lead actors who have the face and the smile that convince many people to give their latest work a chance.

Brolin led the 2010 comic book adaptation, “Jonah Hex,” which got scathing reviews from critics and flopped at the box office. He put on his salesman face while making the press rounds, though. While there were rumors the movie had undergone massive reshoots only months before release, Brolin put a happy spin on everything, claiming the “reshoots” were just for additional material and that the movie was fun and great.

He’s admitted multiple times since then that the thing was a burning tire rolling down a hill they could never catch.

When asked about the film by Nerdist last year, Brolin said, “Oh, ‘Jonah Hex,’ hated it. Hated it.” He then went on to confirm that what everyone thought was true about heavy reshoots turned out to be right on point.

“The experience of making it — that would have been a better movie based on what we did. As opposed to what ended up happening to it, which is going back and reshooting 66 pages in 12 days and that being … Listen, I understand it’s financiers — you’re trying to save their money and it becomes a financial thing, but if — there’s this thing called revenge trading. And I’m disciplined enough to know you never do it,” the actor said.

For perspective, 66 pages in 12 days is insane, especially for a movie the size of “Jonah Hex.” Every page of script is essentially one minute of screen time, and 66 minutes is about the entire runtime of “Jonah Hex.” This means what was released in theaters was a slapped-together, rushed version of something producers demanded. Brolin was happy to sell it with a denial of issues, yet now openly admits the whole thing was a disaster.

He even partially blamed it on the director, Jimmy Hayward, who hasn’t officially commented on the film since its release; from the sounds of it, it seems he had his entire movie scrapped by producers.

“I think it deserved that bashing for reasons that those critics will never know. We were almost ready to drop [the film] when this kid [Hayward] came up. He was an interesting young guy full of energy and he was obsessed with Jonah Hex. I thought, ‘This is either a really bad decision or a brilliant decision.’ Really bad… If I’m ever really rich, I’ll do that movie again. Seriously,” Brolin told Total Film in 2014.